The Shift in U.S. Oil You Had Better See Coming

History has an interesting way of repeating itself.

On Friday, we talked about the birth of the U.S. oil industry. More specifically, we discussed how just a few men took control of nearly every aspect of it — and how the entire monopoly came crashing down after they were sued by the Department of Justice under the Sherman Antitrust Act.

In the casual words of one of my readers, “Those guys had it coming. It was only a matter of time.” And she wasn't referring to their troubles with the Dept. of Justice...

Most of our country's oil was produced in the Mid-Atlantic states, which makes sense considering it was Drake's Titusville well in Pennsylvania that kick-started the industry.

But what many people don't realize is that Standard Oil sealed its fate after passing on the chance to invest in a small project more than 1,300 miles from Titusville.

When Rockefeller and the Standard Oil brass were approached to develop a small field in Beaumont, Texas, it was swatted away like a fly. They reportedly told speculators, “You'll never find oil there.”

So much for that idea.

Birth of a State Empire

We can't blame John and friends for being so dismissive about investing in the area. Texas was the second state to pass antitrust laws.

But if Titusville started the United States oil industry, then the Lucas gusher at Spindletop launched Uncle Sam's oil fame. 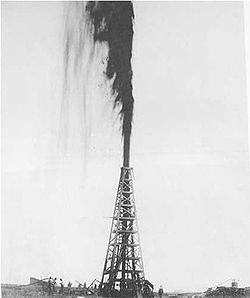 Also keep in mind that up until this point, Texas state production was minimal, hardly a blip on the industry's map.

Six years before that gusher you see to the left exploded with crude, the entire state of Texas was producing less than 100 barrels per year. Soon after they struck oil at Spindletop on January 10, 1901, more than 100,000 barrels were being pumped out on a daily basis.

And that oil discovery on a small hill outside of Beaumont couldn't have come at a better moment...

By 1909, more than 200,000 Americans owned a car. That number topped more than one million less than three years later.

Not surprisingly, investors who recognized the potential of the Spindletop discovery have generated an unprecedented amount of wealth for themselves.

By the late 1970s, more than two and a half million barrels per day were flowing from Texas oil fields.

From the Gulf to the Midwest

Today we're seeing a transition take place: Another group is doing the exact same thing — only this time, it's taking place from the South to the Midwest.

It won't be as sudden as what occurred in the beginning of the 20th century, but it's there for all to see:

Texas certainly gets credit for trying. We've pinpointed one of its best unconventional plays surrounding the up-and-coming Eagle Ford Formation.

The question now is if Texas is finally ready to pass the torch, after more than a hundred years on top of the oil industry.

But the best part for us is it doesn't have to.

Even though we have a front-row seat for this showdown between North Dakota and Texas, the fact is you can't find a better quality crude anywhere else in North America.

It was recently announced that North Dakota had tied California as the third-largest producing state in the Union. (Of course, that information was based on California's production in October.) More than 6,000 wells in ND are producing well over 500,000 barrels per day — and more than 10% of all the oil and rigs operating in the country are drilling the Bakken.

Like my reader from earlier would say, “It's only a matter of time.”

Then again, North Dakota was hardly a blip on the industry's radar prior to 2008... Ring any bells?