A Forecast for Natural Gas Prices

Profiting from the Natural Gas Comeback of 2011

You've probably been told — warned, even — that natural gas may be one of the last places you should put your hard-earned money...

I've been told the same thing.

They say the natural gas markets are dead, that there's no hope in sight for decades to come. They liken natural gas profits to seeing pink elephants — something only witnessed after you've had your head in a pail of Natty Boh.

Sure enough, one quick glance at stagnant price charts, and there's a chance you might take those warnings to heart.

Flat prices have been commonplace during the last few years: 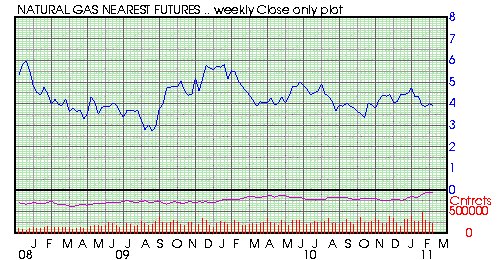 But where most of the herd tends to panic, others see potential...

For starters, the problem lies in the surge in shale gas plays across the United States.

For the sake of our newer readers, here's a good look at where the U.S. shale plays are located: 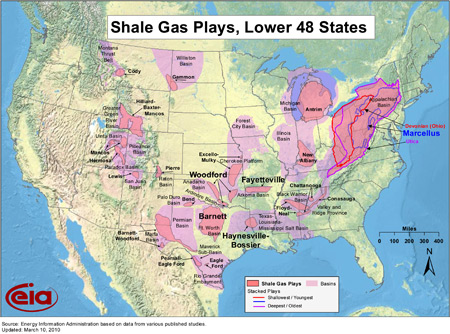 Furthermore, we have a lot of gas. According to the EIA, the United States has 2,552 trillion cubic feet (Tcf) of potential natural gas resources. Approximately one-third of that resource (nearly 827 Tcf) is from shale formations.

Shale gas now makes up 14% of our domestic natural gas supply, but I'll get further into that detail in just a second.

Today, natural gas futures fell more than they have in three weeks. Not only is the winter heating season almost over, but production is also on the rise.

2011: The year of the natural gas comeback

There's no doubt that demand is back on the up and up.

According to EIA data, U.S. natural gas demand in 2010 was higher than ever. Our total consumption for that year reached 24.1 trillion cubic feet, a 5.6% year-over-year increase.

Consider the fact that we only produce about 27% of the oil we use. And we're all painfully aware of our country's addiction to foreign oil...

Natural gas is much different. Last year, we produced 87% of our demand domestically.

Although demand for natural gas goes primarily towards electric power and the industrial sector, there's also a wild card: the U.S. transportation sector.

Doesn't it make sense that our transition away from oil would come from natural gas?

Perhaps UPS adding 48 LNG-fueled heavy-duty trucks to their fleet is a sign of things to come. To date, the company has just under two thousand alternative technology vehicles — more than half of which use LNG for fuel.

Is it time to buy natural gas?

You might find it all too easy to dismiss natural gas plays. The price chart above might suggest there's not much to get excited about...

Natural gas has been shadowed by oil throughout the last few years.

In fact, crude prices have jumped considerably higher, up more than 170% since 2009. I showed you earlier that oil drilling activity is ready to overtake natural gas.

Does that mean your natural gas investments have suffered a similar fate?

Far from it, actually.

Take a look at how some of those companies have been performing for investors: 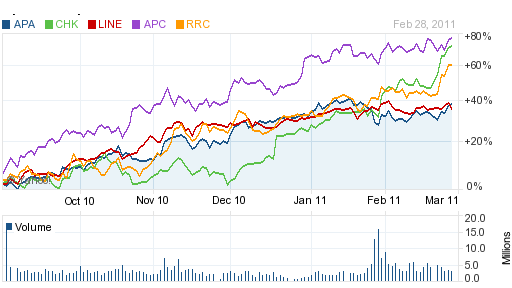 The truth is these companies don't need $15/Mcf to thrive. And some companies are eying even bigger returns...

Range Resources (NYSE: RRC), for example, announced this week the company is selling off their Barnett Shale properties for $900 million. (That's roughly 20% of their total production.)

The sale will allow Range to focus on other plays with more potential, like the Marcellus Shale in the Appalachian region. Almost 90% of their 2011 budget is being spent on the Marcellus.

Those shale plays are going to play a major role in meeting future demand. As you can see below, the EIA expects shale gas to make up 45% of production by 2035: 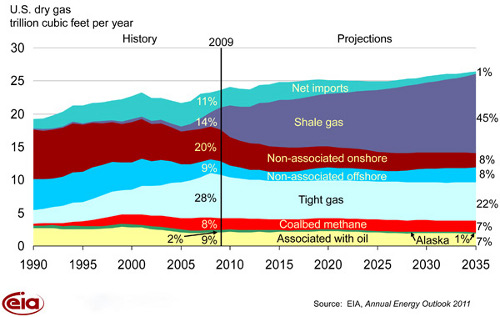 Just imagine what will happen when natural gas prices start to rebound...

Later this week, I'm going to show you another hotbed of natural gas activity. And the best part is these natural gas investments are still flying under everyone's radar.