Today is a special day here in the Old Line State.

A few days ago, Maryland’s Governor, gave us the news that we’ve been impatiently waiting for over the last three months.

With a plan in hand, he laid it all out.

Restaurants will open their doors at 50% capacity, go-kart engines across the state will roar to life, and the most enthusiastic miniature golf pros like, Christian DeHaemer,will finally be able to walk back on the greens.

Well, not quite yet.

And if you were hoping to go to the gym, roll some bones at the Maryland Live! Casino, or walk your circuit around the mall, you’ll have to wait another week.

Oh yes, dear reader, we are nearing the end of this 2020 pandemic craze.

Granted, that’s assuming there are no major setbacks.

Look around, and you’ll find 50 different plans to re-open each state.

But, it’s going to take one thing to kick-start the U.S. economy and get things back to some semblance of normalcy.

Energy… and a lot of it.

A Beaten-Down Commodity Ready to Surge

From a demand standpoint, things couldn’t have gotten much worse.

Just think, this summer, the U.S. expects electricity demand to fall to its lowest point in 11 years. Consumption in the commercial and industrial sectors is expected to decline by 12% and 9%, respectively.

That makes sense, doesn’t it? After all, we’ve been shut down and cooped up since March 30. You can already guess how it affected gasoline demand across the country.

Just take a look that nosedive for yourself: 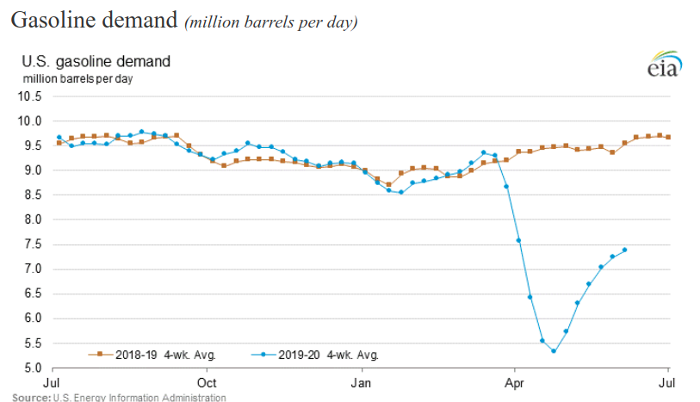 That’s what happens when the lanes are all clear on the 405 in Los Angeles.

Perhaps we can look at China for clues about how the U.S. recovery in oil demand will go. China’s oil demand rebounded to 13 million barrels per day during the second quarter, more than 16% higher than the first quarter.

In fact, China’s oil demand is only 2.5% lower than it was compared to the previous year. That’s what we can expect after measures were taken to open its economy back up.

Are we going to see a similar rally for U.S. consumption?

One thing’s for sure, it’s going to be one helluva ride up.

Putting It All Together

To give you an idea of how bad things got during this pandemic, remember that we consumed an average of 21.8 million barrels of petroleum per day products during the first week of March.

Demand plummeted by 34% within a month.

The EIA’s report, on Wednesday, showed that demand had rebounded to 17.5 million barrels per day last week.

Keep in mind that this occurred while most states were locked down.

Global oil consumption increased by nearly four million barrels per day in May –– much better than what the EIA was projecting.

So the question remains: What will the real recovery look like in the United States?

Will the oil markets balance out sooner than expected?

I’ll let you decide that for yourself. Before you make that call, try not to forget the other side of this fundamental equation.

And I have to tell you, it’s hard not to be bullish.

Not only did we see a new extension of OPEC+ cuts, but U.S. output has fallen to around 11 million barrels per day.

Our production is going to fall further, too. Throughout this pandemic, we’ve watched as drillers started to tighten their belts by radically slashing their capital spending.

The E&P sector has been idling rigs faster than you can wash your hands.

Today, almost 700 FEWER drilling rigs are operating in the United States compared to a year ago.

We are finally seeing the light at the end of this COVID tunnel, and oil prices are still under $40 per barrel.

An ocean of oil will remain locked in the United States’ tight rock formations at that price.

And it’s going to open up a wealth of opportunities for the right drillers to turn a profit in these dark times.

We’ll take a look at one of them next week.