It is true that a stock market crisis is the time to make your fortune. In 2002, after the dot-com bubble, you could have bought Amazon (NASDAQ: AMZN) for $3 and a pickle. A few months ago, it hit an all-time high of $2,185.

I remember George Soros being interviewed in 2009. He said, “I’m having a great crisis.” His Quantum Fund gained 28% that year while the rest of the market was down 50%.

Another one of my favorite investing stories is about Jesse Lauriston Livermore, who made over $100 million by shorting the crash of 1929. When he went home after work, he discovered that his wife had moved all of their furniture into the barn and fired the staff. Hearing of the crash, she thought they were destitute.

He told her that, to the contrary, he had made more money in a day than he had in his whole life.

Livermore is the godfather of technical analysis. He wrote a book called Reminiscences of a Stock Operator. From it, you get such hoary Wall Street adages like "bulls and bears make money; pigs get slaughtered." I suggest you read it.

As I write this, the DJIA has bounced so much that it paused trading. It is "limit up," as they say. The price of gold is up $100. Pan American Silver Corp. (NASDAQ: PAAS) is up 20% after being up 20% yesterday. All is good with the world.

This tells us that all of the margin calls and panic selling has finally washed out of the market. Today, we are getting a bounce, and tomorrow we will get some short covering.

The market is now being somewhat rational — or as rational as a system run by machines can be...

Let's put some of Livermore’s technical analysis to work.

Here is a chart which lays the current market on top of the crash of 1929. You will see that it's one of the fastest sell-offs in history. In the 1929 crash, stocks bounced back for three and a half months and then sold off again. 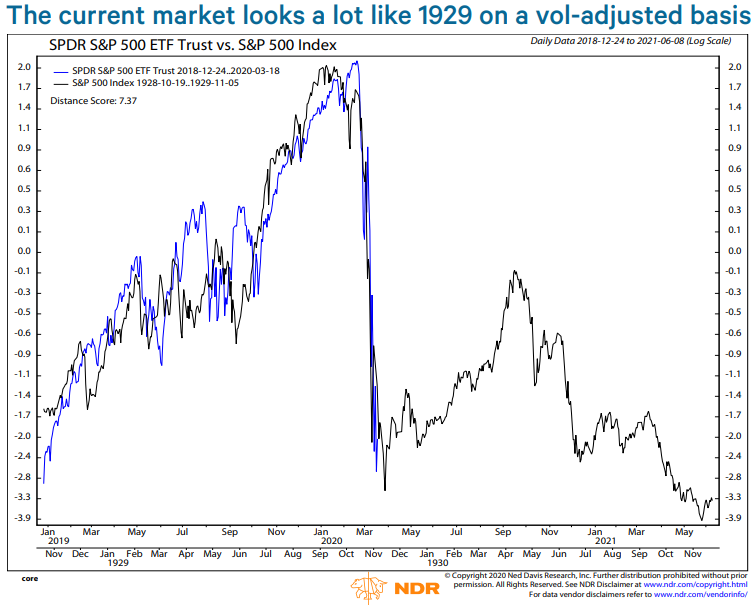 This is a common pattern in stock market crashes. You can see the pattern in Bitcoin after the 2017/18 crash for instance.  The first rebound takes back around 50% of the sell-off.

You can imagine the storyline: The bailout bill passes Congress, the COVID-19 death rate starts to drop, people say it's not that bad, Trump talks up the economy, refis go off the chart, FOMO comes back, etc.

Three months from now, sometime in June, the other shoe will drop: bad earnings, devastating GDP numbers, unheard of government debt, 12% unemployment, repos on houses, divorces, riots, and nasty politics due to the upcoming election.

There will be a resurgence of the now-forgotten virus.

And don’t forget there will be permanent change in the way society does business. The green arguments against commuting by car have already started. No one knows what is in the $2.5 trillion, 1,280-page bill currently lurching its way through congress... but you know it's chock full of new regulations and giveaways to lobbyists and other rent seekers.

It will be horrific in the long run. If your blood isn’t boiling now, it will be.

Mark my words, there will be haves and have-nots in the new economy. You will want to use the next few months to make changes to your long-term core portfolio.

The next three months will give you one last chance to sell Ford (NYSE: F) for instance and buy some "work from home" stocks.

If It Feels Good, Sell It

Here is the classic chart that shows the emotions of market cycles. We are now in the bull trap phase. When the talking heads say we are returning to normal, you sell. Don’t forget this. This time is not different. 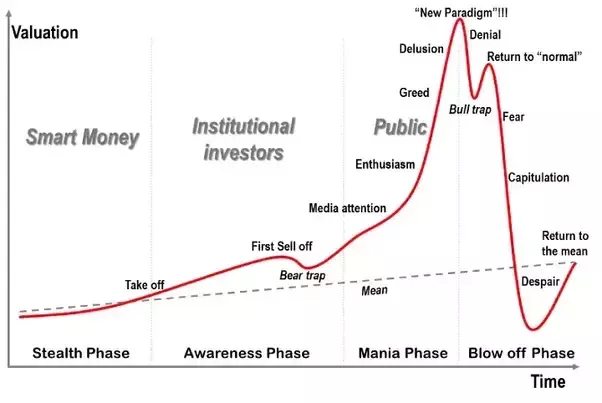 By all means, take advantage of the next few months. Buy some gold. In my last issue, I recommend the U.S. Mint Gold Eagles right before the premium went nuts. Those aren't worth paying extra for, even if you can find them. But you can buy blue chip gold miners like Barrick Gold (NYSE: GOLD). It’s not too late to buy silver.

My associate Keith Kohl has been writing about a fantastic idea to take advantage of the contango in oil prices. Oil is now at $23 a barrel, but March 2021 oil futures are at $38 a barrel. You could easily make 10 times your money by following his advice.

The upshot in all of this is that now is the time to make large bets on stocks in which you have strong confidence. But don’t forget to sell in three months or at the 50% retracement.

Alternatively, the more conservative play would be to sell the bounce and wait for the bottom.

Price Drop Means Massive Demand; Bullion Dealers Sell out of Gold, Silver
A drop in the price of gold and silver — besides fears of a recession and an economic downturn amid the coronavirus outbreak — has created a demand spike for the metals so large that bullion dealers around the world are selling out!
Hydrogen Fuel Cells: The Downfall of Tesla?
Lithium has been the front-runner in the battery technology market for years, but that is all coming to an end. Elon Musk is against them, but Jeff Bezos is investing heavily in them. Hydrogen Fuel Cells will turn the battery market upside down and we've discovered the tiny company that is going to make it happen.