A $3.3 Trillion Oil Strike at Your Fingertips

Is oil finally out of the doldrums?

But if you’ve been paying attention, you know we don’t need oil anywhere near that high to make a killing in this market.

In fact, we’re already profiting with oil at $50!

Earlier this week, both Brent and WTI broke the $50 mark, reaching $58 and $52 respectively.

Those are the highest prices we’ve seen since July.

And we’ve got nowhere to go but up...

This Is Your World on Oil

Since 2014, the global oil industry has been in a supply glut.

That simply means we’ve been producing way more than we actually need.

Given that the world consumes more than 98 million barrels of oil per day, that’s quite a feat.

But it was an easy milestone to hit once U.S. shale appeared on the scene.

The country’s oil production growth has been nothing if not impressive — and insanely profitable for early investors.

But the oil market has always been cyclical.

As you can see, oil prices dropped sharply in 2014 and stayed low... until now. 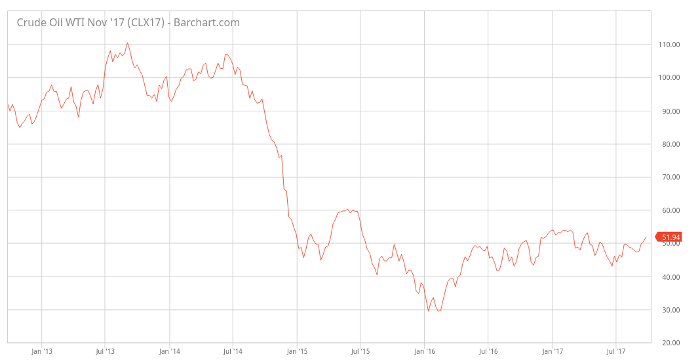 Not only are we finally seeing some solid price recovery, but we’ve got a bright future of crude oil profits to look forward to.

In June this year, the International Energy Agency estimated that demand would outpace production again as soon as 2018, when global consumption would breach 100 million bpd.

This month, it raised the stakes.

The IEA upgraded the demand growth estimate for 2017, bringing total growth for the year to 1.6 million bpd.

And that supply-demand gap is expected to keep shrinking.

The IEA notes that prices will be rising in the next few years because companies, euphoric over high production numbers but scared off by low prices, have been cutting back on new investments.

Essentially, we’re looking at a lightning-fast switch from glut to shortage.

And some oil plays are better prepared for this inevitable future than others...

Get the Crude Out

A few years ago, pumping as much oil as fast as possible was the most important thing.

Today, producers are more cautious. They know it’s more important to have long-lasting supplies that will carry their business through good times and bad.

Producers in the Permian Basin of West Texas are a prime example of just that.

Through the worst of the oil rout between 2014 and 2016, the Permian was the only U.S. play where production didn’t take a dive. In fact, it continued to grow the entire time!

It’s still considered some of the most valuable land in the oil industry.

And it’s looking like it may hold onto that title for quite a while.

Remember, the Permian Basin STILL HOLDS between 60 and 70 BILLION barrels of crude.

At today’s prices, that’s nearly $3.3 trillion worth of oil.

And, as I said before, oil’s still on the rise.

More important, however, is what this report means for the life of the Permian and the shale drillers operating in its most productive areas.

That much oil, IHS notes, would be enough to fill every U.S. refinery to capacity for 12 years.

All from one play!

Of course, the Permian is not to be underestimated.

Scott Sheffield, Chairman of Pioneer Natural Resources, estimated last year that the play held as much as 75 billion barrels of oil.

Apparently he wasn’t far off the mark!

Pull the Trigger or Miss the Train

I’ve been an oil bull for a long time, and it’s nice to see that faith finally pay off.

If you sold off your oil shares when the price bottomed out at $23, or have been avoiding entering the field until things were looking up, now is the time to jump on this opportunity.

It’s a stock-picker’s market right now, and some of the best (if not the only!) opportunities in the sector can be located in the prolific Permian Basin.

Everybody wants a piece of this valuable oil play, and we here at Energy and Capital make it our business to find out which stocks are real winners and which are just duds playing on hype.

Now, we’re prepared to keep making money, and to help you do the same, as oil makes a miraculous recovery.

I Hit a Tesla This Morning, and I Liked It
Energy and Capital editor Keith Kohl ruminates on the EV market after hitting a Tesla.
Lithium Price Breakout
The price of lithium is breaking out! And from here, prices for the energy metal are set to absolutely explode! You will not want to miss out on this opportunity.
2018 Oil Outlook
Energy and Capital editor Keith Kohl gives readers his oil price outlook for 2018...
Tesla Beats Out Hydrogen Alternatives
How do these hydrogen alternatives stack up against Tesla's EV designs? Here's what Elon Musk has to say about this new competition...
Hydrogen Fuel Cells: The Downfall of Tesla?
Lithium has been the front-runner in the battery technology market for years, but that is all coming to an end. Elon Musk is against them, but Jeff Bezos is investing heavily in them. Hydrogen Fuel Cells will turn the battery market upside down and we've discovered the tiny company that is going to make it happen.