4 Powerful Predictions for the Rest of 2016

Mid-Year Updates: Did You Stick to Your Resolutions?

Are you sticking to your New Year's resolutions?

Given the turmoil in the markets this year — which, let's be honest, was much rougher than even we expected it to be — it's time to look back over the predictions made at the beginning of the year.

1. We're Living in a Gas-Fueled Future

At the outset of 2016, I saw natural gas prices rising more quickly than oil prices. Both commodities took a hit between 2014 and 2015.

And while the oil market was still looking for a bottom back in the beginning of the year, natural gas had some more promising prospects.

After all, the first LNG exports were being shipped from Hackberry, Louisiana.

Watching U.S. natural gas reach a global market, it wasn't hard to get a little excited.

It wasn't too long before we saw prices rally...

Between March and July, natural gas prices surged nearly 82%, far surpassing the 47% rise in WTI prices during the same period!

But even though natural gas did recover faster than crude, the next phase will be much harder for investors to predict — the uncertainty around how the Brexit transition will take place proves that much.

What you can count on, however, is that natural gas has a bright future ahead for us.

The EPA will ensure that.

Here's a look at how much the U.S. is expected to rely on natural gas for electrical generation over the next 24 years: 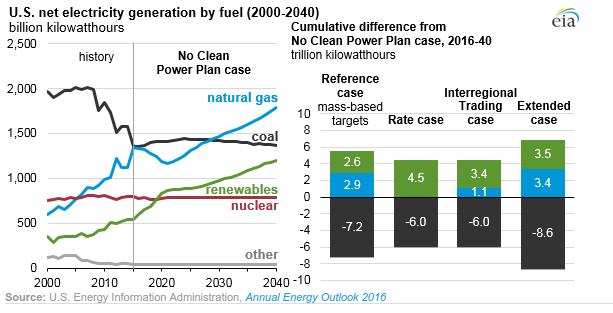 Natural gas, which already surpassed coal as a power source this year, will continue its momentum over the next several decades. For the first time in U.S. history, power plants burned more natural gas than coal in 2015.

What's next? Well, both natural gas and oil are poised to continue their recovery and slowly make gains as the supply/demand imbalance works itself out.

Have you heard anything about the U.S. Clean Power Plan recently?

Probably not, and I haven't heard much either.

Don't get me wrong; I'm sure the discussion is lively in some circles.

Unfortunately, you and I both know the egregious red tape the EPA is trying to overcome in Washington, D.C.

Remember, the Supreme Court issued a “stay” of the Clean Power Plan, which barred the EPA from enforcing its rules until all the lawsuits against it are resolved.

Don't look for a swift conclusion, because if we are absolutely certain of anything, it's the turtle-like pace at which Capitol Hill moves.

Solar is a different story...

Early this year, I told you the phase-out of the ITC would bring solar projects into production very quickly. And I was right — though they're not the projects many assumed they would be.

But despite rooftop solar dominating the market in the beginning, larger utility-scale projects are starting to take over. 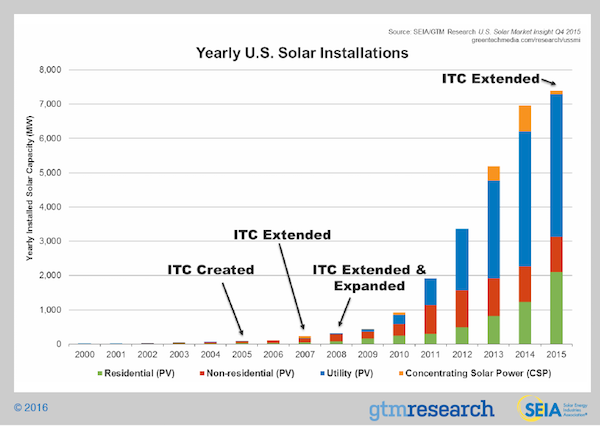 GTM Research expects that more than 70% of new solar this year will be from these large-scale systems that connect to utilities, not directly to homes.

In some cases, these large solar installations are producing energy even cheaper than natural gas. Lazard, a leading financial advisory and management firm, did a study that found some completely unsubsidized solar energy systems to be between $2 and $8 per megawatt-hour cheaper than even the most efficient natural gas plant.

And that, dear reader, is another prediction that came true: solar is still on the rise — even without additional funding support!

Even if rooftop solar falls to the wayside (as the recent SolarCity debacle suggests it might), the solar industry is far from lacking in business prospects.

Of course, my veteran readers know full well that the lithium bull market is only just getting underway.

Utility-scale solar is going to continue to need utility-scale storage; in fact, that storage could make renewables even more economical than fossil fuels.

Now, I'm not trying to suggest that the oil and natural gas industries will die out overnight (just see above!), but there should be no question that solar will become increasingly competitive.

And it's not just utilities that will be needing battery power...

The surging EV market is currently the biggest driver of the energy storage boom. And while Tesla is credited with starting the race, more and more players are emerging.

The bottom line for us is that this trend isn't going to end anytime soon... and right now is the time that early investors are positioning themselves.

In fact, a small, elite group of companies in the sector are laying the groundwork for a lithium boom right here in the United States!

This is one prediction I can make that is pretty much guaranteed, no matter what else the markets do: water will be the world's ultimate commodity.

There's no avoiding the problem anymore.

The world's aquifers are being depleted, pipe systems are going bad en masse, and there is no alternative to water should we lose the resource.

No matter what else you invest in this year, water will most assuredly be a strong long-term play.

Keep an eye out for further updates on these opportunities! Who knows how much crazier the market will get this year?