3 Ways to Beat a Bear Market for Big Money

Baseball fans are never more excited than they are at this time of year. After all, every team is in first place on Opening Day. From Dodger Stadium in Los Angeles to Citi Field in Queens, you can feel the electricity in the air in early April.

Truth be told, there are few things I enjoy more than taking in a baseball game with friends and family on a warm spring day. The smell of hot dogs roasting, french fries frying, and powdered sugar on fried dough makes my mouth water. The crack of the ball hitting the bat sounds like spring as much as birds chirping.

There’s also another group of people who love the coming of springtime — traders and investors!

April marks the last month of the “best six months” for stocks in a yearly cycle. If you're unfamiliar with the concept, the “best six months” period for stocks is a data-proven idea that shows since 1986, on average, the best-performing six-month period for stocks runs from November through April. April also tends to be the strongest month for market returns during this six-month period. On top of that, we’ll see hundreds of companies report earnings, which traditionally gives the market a nice boost.

Considering this data, it would seem like picking investments and trades for April should be a walk in the park. But truthfully, I’m a lot more bearish in the near term.

A major reason why is the recent “Fed speak.”

Now, I’m on record many times over saying the Fed could actually even make a 0.75-bp move at some point, and this announcement from the central bank’s most dovish member makes me feel even more confident that I could be right come May. Moreover, Brainard noted that the Fed could likely start reducing its balance sheet in May and at “a rapid pace.”

Of course, all this and the other headwinds my colleagues and I have highlighted for months now are exactly why stocks, led by the tech-heavy Nasdaq, are under significant pressure this week. 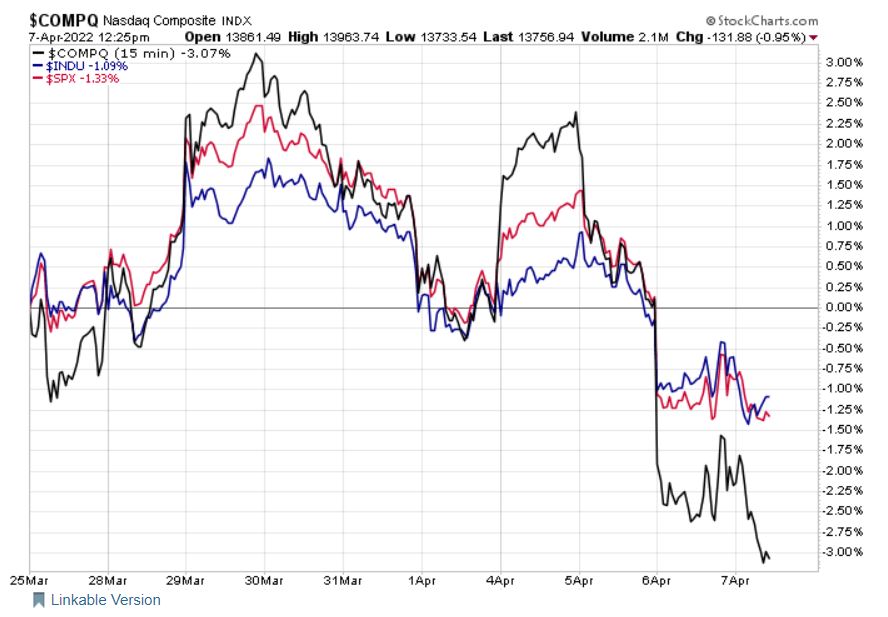 Long story short, I think we’re in for some disappointing news from some of Wall Street’s favorite companies.

According to the most recent estimates and consensus data, S&P earnings are currently expected to rise 3.6% in Q1 2022. For a bit of context, in Q1 2021, growth came in at 32%, marking a significant decline in growth.

Moreover, negative revisions are much higher than last year over the same period.

Given this new data, we’ll need to be much more selective on the trades we put money on.

And since I’ve made a number of double- and triple-digit wins this year already while the greater market breaks down all over the place, I wanted to share my top three ways to trade a bear market and actually make money!

No. 3: Take a Stake in Metals and Health Care

If you own a lot of high-flying tech stocks, one way you can protect some of your capital is by trimming down those riskier positions and adding some high-value, low-beta names to your portfolio.

For example, as I type Thursday, the greater markets are all down 0.5% or more while a stock like Procter & Gamble (NYSE: PG) is up over 1.25% through midday trading. The same can be said for many metal miners. Uranium miners are picking up a lot of steam, and many were up 3%–4% or more on Thursday. For example, Uranium Energy Corp., a smaller uranium miner, is seeing a lot of new investments, and as the sucker’s rally in the S&P 500 and Nasdaq broke down, these stocks surged as a safe haven. 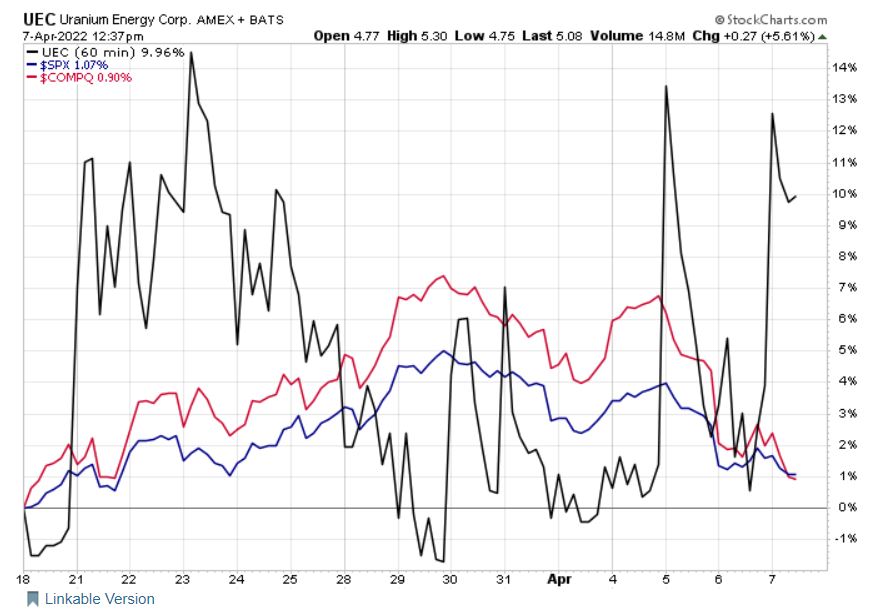 Another way to beat a bear market is with inverse ETFs, which are exactly what they sound like. They're an easy way to join in on shorting a particular index-specific ETF, like the Invesco QQQ Trust, which is an ETF that strongly correlates to the Nasdaq index. If you’re bearish on the Nasdaq, you can buy into the ProShares UltraPro Short QQQ ETF (SQQQ), represented by the black line, which inversely correlates to the Nasdaq (blue line). In short, when tech stocks go down, the SQQQ ETF goes up. In fact, over the past two days, the Nasdaq was down almost 4% while SQQQ was up almost 10%! 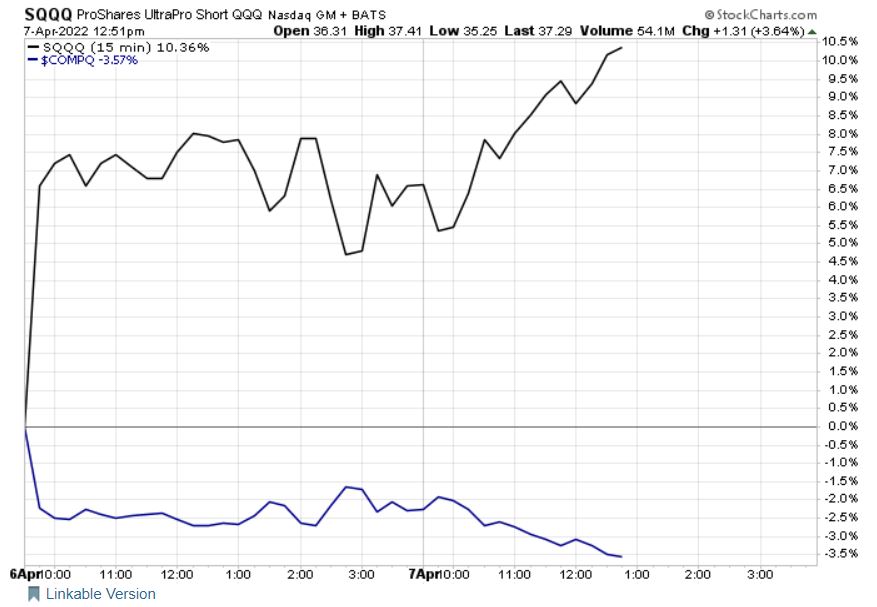 Of course, to keep these gains, you must be nimble and exit the trades at the right times. That time is when these negatively correlated indexes or ETFs indicate they're about to move higher again. But with a little insight and guidance like you receive here at Energy and Capital, you should be able to pull off these trades nicely.

Now, let’s jump into the best way to beat a bear market!

Hands down, the very best way to make money in a bear market is by using what experts call “naked trades.”

The strategy hinges on trading the options market in a very specific way. But I’ll tell you right now, it’s nothing like what you’ll find when you Google the term.

In fact, in all my years of searching the web, I’ve found a ton more misinformation about naked trading than I even have surrounding the 2020 presidential election. Today, I want to dispel the myths, talk about the facts, and then show you exactly how my Naked Trades army and I are making tons of big wins this year.

For example, as you know, oil and gas prices have surged all year, driving stocks in this sector much higher as well. For instance, take Brazilian oil and gas giant Petrobras (NYSE: PBR).

However, by trading the right options around this stock, my Naked Traders and I were able to lock in a 205% return in the very same time frame. And even better, we made a similar trade a month later and locked in a 133% return! All while most investors and traders were losing money!

Now that’s how you beat a bear market!

I have no plans of stopping here and letting the next round of headwinds stop the winning.

In fact, this past Wednesday, I used my Asymmetric Profits system to make a naked trade on Twitter (NYSE: TWTR) to play off the Elon Musk news, and in 24 hours I banked 40% in gains before cashing out.

In and out quickly for big money — that's the Naked Trades way!

See how it works here.