Just when you thought the chaos this year was over, Marco and Laura showed up to the party.

As the two storms started making their way toward the Gulf Coast, they became more difficult to ignore.

The good news is that Marco decided to dip out early after the storm was downgraded to a tropical depression two days ago.

The bad news is that Laura took a different approach and is now expected to be a Category 4 hurricane by the time it makes landfall on Texas and Louisiana.

Yet it’s more than the devastating winds in excess of 120 mph that will be particularly brutal for us.

You might remember the last time a Category 4 hurricane made landfall in the region. Hurricane Harvey tore through Texas and Louisiana in 2017, leaving nothing but death and destruction in its wake.

Ready or not, Hurricane Laura is on its way.

All of a sudden, natural gas finds itself back in the spotlight.

If you’re drilling offshore in the Gulf, the one thing you had better be prepared for is the Atlantic hurricane season.

So far, nearly 300 platforms have been evacuated, with about 84% of oil production and 60% of natural gas output currently shut down as they brace for the storm.

That’s not an insignificant amount, mind you.

We’re talking about more than 1.5 million barrels of crude oil and 1.54 billion cubic feet of natural gas per day!

As you might expect, natural gas prices received a shot of adrenaline; prices have jumped more than 40% over the last few weeks.

Stop for a second and try to think back to the last time you heard about a major run higher for natural gas prices.

Spot prices on the Henry Hub have been heading downhill for years. 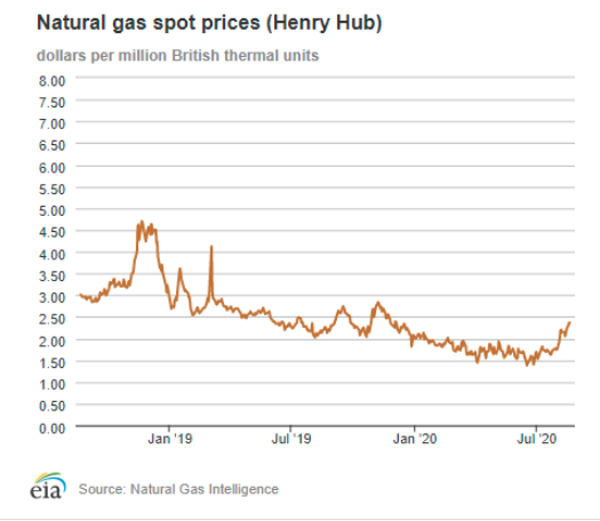 We can’t give Hurricane Laura all the credit.

You see, with the sole exception of growing U.S. liquefied natural gas (LNG) exports, natural gas may have been in the back of every trader’s mind over these last few years.

Make no mistake, our hunger for natural gas is reaching new feverish heights.

In fact, the EIA reported this morning that the U.S. recently set a record for natural gas demand in the power sector.

On July 27, we consumed 47.2 billion cubic feet (BCF) of natural gas in the power sector alone... 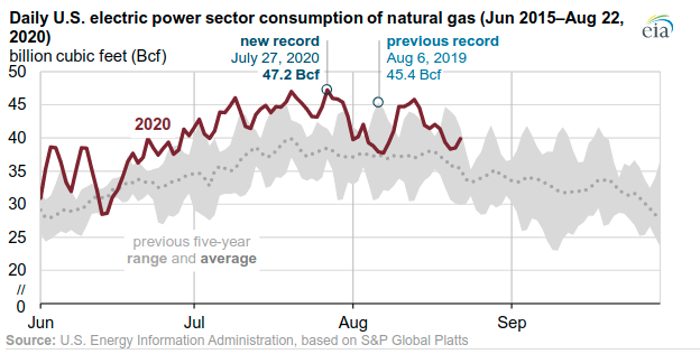 That isn’t some fluke from the heat wave we’ve had this summer.

Between 2010 and 2019, our demand for natural gas in the power sector almost doubled to 5.9 trillion cubic feet per year!

You’d think the herd would have noticed by now.

However, the question you should be asking is "Where is gas headed?"

I know it’s easy to see the short-term spike from Hurricane Laura and want to buy hand over fist.

Looking at the EIA’s latest Short-Term Energy Outlook, Henry Hub spot prices are expected to average $3.25 per thousand cubic feet in 2021, which would represent a significant 54% year-over-year increase.

There’s one major issue with being overly bullish on natural gas right now.

No matter how you slice it, we still haven’t addressed the glut of gas right now in the U.S. One of the reasons we’re using so much of it is because it’s dirt cheap!

That is all thanks to both the flood of tight gas production in the Marcellus, as well as the huge amounts of natural gas being extracted from oil wells, particularly in the Permian Basin — enough to make the 1.5 billion cubic feet currently shut in from Hurricane Laura look like peanuts.

This month, the EIA expects natural gas output in the Appalachia region to average 32.6 billion cubic feet (BCF) per day.

Meanwhile, demand for natural gas is expected to decline to 78.7 BCF per day in 2021.

Even though prices spiked this month, you’ll notice that the largest U.S. LNG exporter has lost ground.

It seems that making the prudent decision to evacuate Sabine Pass and suspend operations has put some of the investment herd on edge, causing more than a few to head for the exit.

But you know the saying, right?

A crisis for one investor is an opportunity for another.

When the storm blows over and things eventually return to some sense of normalcy, taking advantage of this weakness is a no-brainer.