2020 Predictions Every Investor Should Read

Although it’s quite common to say “can you believe another year has already gone by?” 2020 definitely has some significance. At least for me.

You see, 2020 has, for a long time, been the threshold for many of my predictions.

Back in 2007, I spoke at an Angel Publishing conference where I introduced those in attendance to a market that I believed would be very big by 2020 and make us a lot of money along the way. I even mentioned a company that hadn’t yet gone public but was, in my opinion, going to be a game changer in personal transportation.

That company was called Tesla (NASDAQ: TSLA), and I predicted that by 2020, it would be a household name, successfully competing against the major carmakers.

I also predicted that if the company ever went public, it would make early investors a lot of money.

This is what happened: 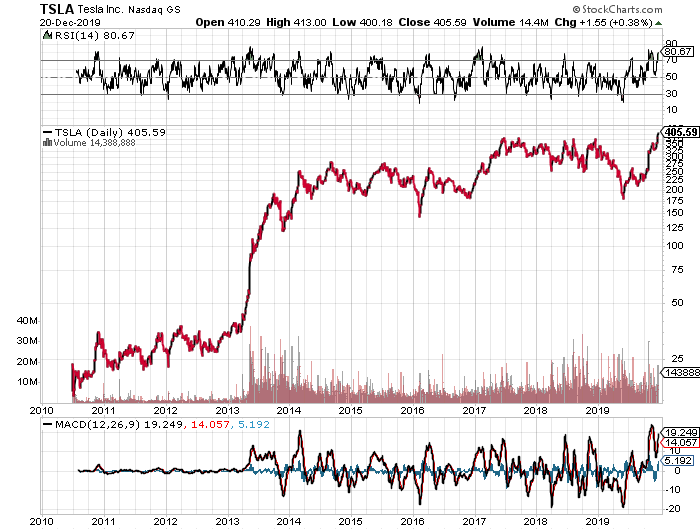 While I would argue that Tesla stock is currently overvalued based on technical analysis, the company remains a powerhouse of innovation and disruption. And overall, the electric car market continues to grow rapidly.

The technology is moving so fast, and as more and more drivers realize the benefits of electric cars (not reliant upon petroleum, can “fill up” at home, far cleaner than internal combustion, better driving experience, far less to maintain with no oil changes, no tune-ups, brakes last much longer), electric car acceptance will happen faster than a lot of folks anticipate. We’re actually already starting to see evidence of this.

Truth is, you’d be hard-pressed to drive on any major highway these days and not see an electric car.

In 2006, I also predicted that by 2020, coal would lose market share to natural gas and renewable energy.

With the price of solar, wind, and natural gas rapidly declining, thanks mostly to technological advances and a growing social movement that would instigate legislation designed to support renewable energy integration, it seemed like a no-brainer at the time. But boy did I get a lot of pushback from that one.

In fact, I remember speaking at an energy conference in Montana, where I basically told a group of deep-pocketed coal execs that coal’s days were numbered. But despite their anger and mockery, my research was sound.

In 2006, coal owned about 50% of the electricity generation market. Natural gas owned just over 20%, and renewables about 8%, with most of that coming from hydro.

This year, coal’s share of the market hit 20% (averaging 24% for the year), with natural gas expected to come in at 37% and renewables coming in at 23%

I predict that in the next 20 years, coal’s share of the U.S. market will come in at around 5%, with natural gas topping out at about 40% and renewables delivering about 45%. Nuclear will own about 10% of the market.

Investors looking to take advantage of this would be wise to focus on new renewable energy technologies and battery storage.

From Illegal Drugs to Breakthrough Therapies

Back in 2015, I started writing about the legal cannabis market, predicting that by 2020, at least 30 states would have some form of legalization in place. This number currently stands at 33, with 11 of those states having legalized the adult-use of cannabis. That is, not for medicinal purposes, and no prescription required.

I predict that in 20 years, not only will every state in the union have some form of legalization in place, but the federal prohibition on cannabis will be lifted, and the industry will be treated no differently than the alcohol and tobacco industries.

And it won’t stop there.

Riding on the coattails of cannabis legalization, psychedelics are also going to become legal. Although not in the same way we’ve seen with cannabis.

It is unlikely you’ll see psychedelics available for purchase at regulated dispensaries, aside from, maybe, psilocybin, a.k.a. “magic mushrooms.” But for the most part, psychedelics are real medicine and are now being treated as such.

Three psychedelics companies have already been given “breakthrough therapy” designations by the FDA, which are designations designed to expedite the development and review of drugs that are intended to treat a serious condition and for which preliminary clinical evidence indicates that the drug may demonstrate substantial improvement over available therapy on a clinically significant endpoint(s).

There’s a lot of new evidence that suggests many of these molecules can help treat addiction, depression, anxiety, and PTSD. There will be a lot more research happening in this market in the coming years, and you would be wise to pay close attention to it, as there will be opportunities to get in early on this market.

A Little Pain, a Little Pleasure

From now until 2040, we will likely endure plenty of pain.

The threat of terrorism remains very real, and in many ways, it continues to be exacerbated by war-hungry bureaucrats who still think nation building is a good idea — despite all the blood and treasure we’ve spilled over the past 20 years.

The threat of climate change is also very real. Whether or not you believe it has something to do with humans is irrelevant at this point. This is happening, and it’s going to kick our biological urges for survival into overdrive.

The threat of new pandemics will continue to be an issue for which we will still have to be prepared. This kind of thing isn’t new, but it’s worth mentioning, as sometimes we tend to think we can outsmart diseases that can mutate a lot faster than we can treat them.

But it’s not all doom and gloom.

From now until 2040, we will also experience a lot of new, positive developments.

Positive economic developments instigated from the acceptance of free market capitalism that will help more people break the chains of poverty.

Social and political developments that will help make a serious dent in human trafficking and slave labor.

Technological developments that will make our lives easier, our planet cleaner, and our collective consciousness more expansive.

And I could be way, way off.