You've got one more week to become a gas bull.

I'd give myself the same deadline if my readers and I weren't already expecting a natural gas comeback. Personally, I find it nearly impossible not to have a strong outlook for gas.

Over the last few years, ever since gas prices bottomed out, we've talked about the growing role the fuel is playing in the United States, whether it is against the coal industry or even taking on renewables like wind.

Investors that passed on gas last winter undoubtedly regretted their inaction. But with prices down 25% since last June, is the market giving you a second chance?

I have a feeling the bearish sentiment we've been seeing far too often lately will start swinging the other way.

In fact, it could start happening in just nine days, and here's why...

In late August, we got our first taste of how the natural gas markets are shaping up for the upcoming winter.

If The Old Farmer's Almanac nails its prediction for a super-cold winter in the eastern United States, then perhaps nothing else will contribute more to your gas profits this winter than the inventory reports being released each Thursday by the EIA.

Today, we're only nine days away from a critical tipping point for natural gas. As you know, we're at the end of what's known as the injection season.

Since natural gas has traditionally been a seasonal fuel, with demand obviously peaking during the cold winter months, then you can imagine how important it is that the United States injects a sufficient amount of gas into storage during the warmer months.

Well, next week marks the end of the injection season. Now, don't get me wrong — the U.S. has stored a lot of natural gas since this season began. In fact, the EIA report last Thursday marked the 26th consecutive week that injections have been higher than the five-year average.

Since this was written prior to the release of this week's storage report, we'll soon know whether it has been extended to 27 weeks. Just keep in mind that analysts expect to see between 95 and 98 billion cubic feet put into storage for the week ending October 17th.

Regardless of another higher-than-average injection, however, we're still in a precarious situation.

Despite the fact that we've had a strong injection season in 2014, the amount of working gas in storage is still 9.9% lower than the five-year average. 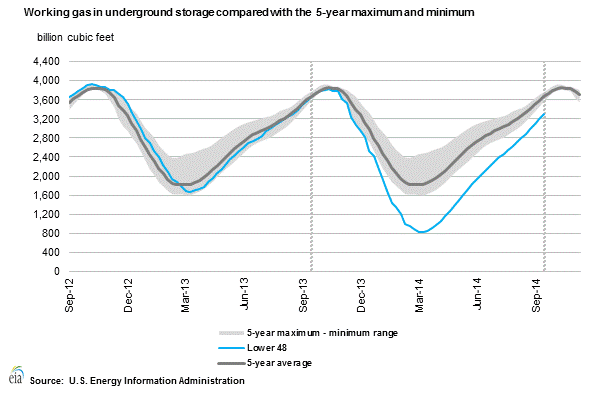 In the Short-Term Energy and Winter Fuels Outlook that was released earlier this month, the EIA reported that even though the levels are lower than last year, it will be enough to sufficiently meet demand.

The EIA, however, isn't expecting a very rough winter.

I'll let you decide whether or not the EIA will revise its forecast once the bitterly cold weather returns.

I'm willing to bet my readers have heard someone refer to ExxonMobil as the largest publicly traded oil company on the planet.

Turns out they're almost right...

With a market cap of nearly $400 billion, they're not wrong about its size.

Take a closer look at the company's 10-K filing in February, however, and you'll understand why I consider this mammoth member of Big Oil one of the world's largest natural gas companies.

At the end of 2013, ExxonMobil's proved reserves stood at an eye-popping 25.2 million barrels of oil equivalent.

Unfortunately, crude oil accounted for only about 29% of that amount.

It only cost Rex and friends a cool $41 billion to join the shale gas boom through their acquisition of XTO Energy.

But is Big Oil... er, Big Gas... really the addition we're looking for?

Nowhere else should you be more bullish on natural gas production right now than the Marcellus shale. And despite having a market cap 36 times lower than Exxon's, Range Resources is among the largest gas producers in the region.

Range is the original Marcellus driller. More than half a decade before ExxonMobil decided to make its purchase of XTO Energy, Range Resources was busy drilling and completing the first economic Marcellus well: the Renz 1.

Then again, if you sit out the screaming buying opportunity that has presented itself during this past injection season, then go to sleep, darlings, till the summer comes again.

Crude Oil Outlook 2015
Energy and Capital editor Keith Kohl takes a look at what investors can expect from the oil industry in 2015.
How to Take Advantage of Low Oil Prices
Energy and Capital editor Alex Martinelli explains the recent decline in oil prices and offers two ways for investors to take advantage.
Pennsylvania Gas Stocks
Energy and Capital editor Keith Kohl explains why an upcoming brutal winter in 2015 will be a boon for natural gas investors in Pennsylvania.
Natural Gas Prices Vs. Propane Prices
Energy and Capital editor Alex Martinelli delves into the differences between natural gas and propane prices, and describes how these commodities are the future of our grid.
Hydrogen Fuel Cells: The Downfall of Tesla?
Lithium has been the front-runner in the battery technology market for years, but that is all coming to an end. Elon Musk is against them, but Jeff Bezos is investing heavily in them. Hydrogen Fuel Cells will turn the battery market upside down and we've discovered the tiny company that is going to make it happen.