In June I told you that “natural gas simply can't stay this low for a litany of reasons.”

Natural gas prices that week were between $2.45 and $2.60 per million British thermal unit (MMBTU).

Reasons gas would head higher included prices already above $15.00/mmbtu in Asia, the fact that winter 2011/2012 was extremely mild, and the reality that it costs companies $5/mmbtu (on average) to get it out of the ground.

Four months later, natural gas prices are pushing $3.30 — and are looking to move higher as winter approaches. This 30% upward move can be seen in the chart below.

You should also notice that natural gas prices are still extremely low in historical context. 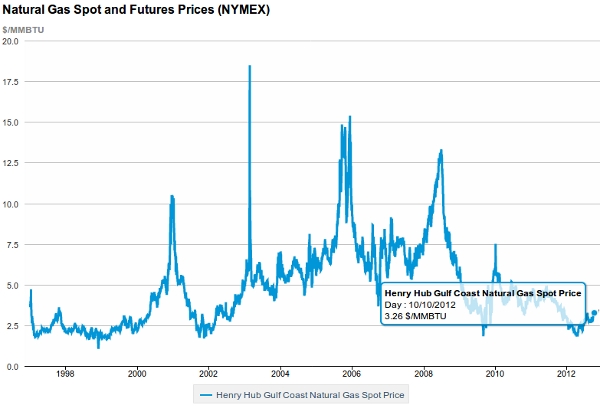 Because companies need it to be around $5.00 to break even, you can see how low prices have affected the shares of companies like Devon Energy (NYSE: DVN), Encana (NYSE: ECA), and Chesapeake (NYSE: CHK):

As natural gas prices rebound, there are several sub-topics that need to be discussed. 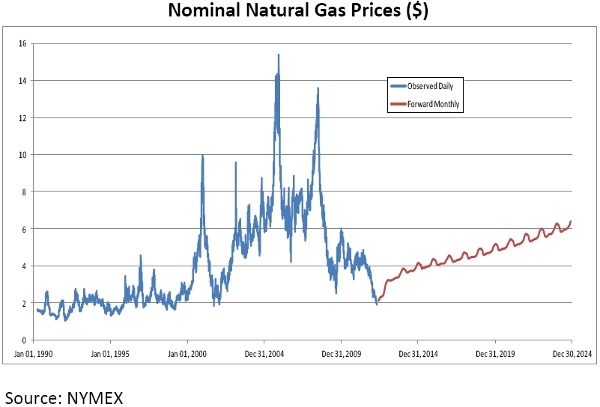 And second, from a compilation of the past seven Annual Energy Outlooks from the Energy Information Administration: 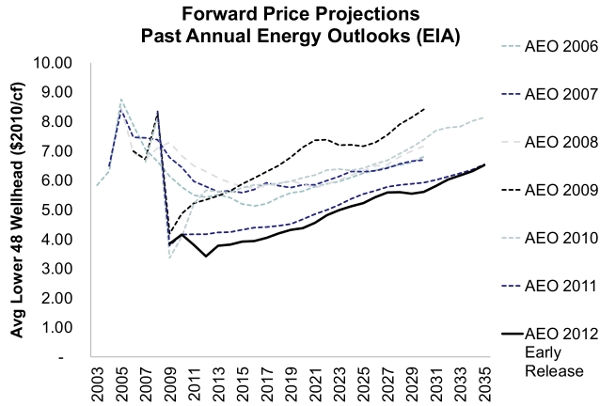 You can see the contracts reflect the forecasts, with $4.00 gas returning in the next two years and $5.00 gas likely by the end of the decade. That represents a 25% and 50% rise, respectively, from today's levels.

It's no secret there's a glut of natural gas in North America.

It's the reason prices collapsed to $2.00 this year.

Just a decade ago, it was commonly accepted that we had a 1.5 trillion cubic feet supply... 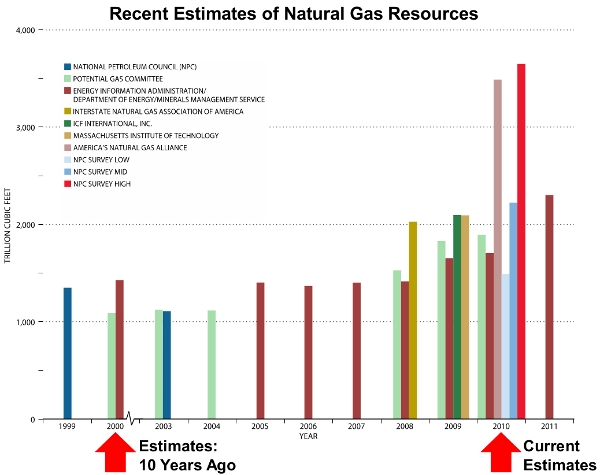 Now the question is: What are we going to do with all this cheap gas?

Several have applied for permission do to so from the Energy Department, which has to find the exports consistent with the “national interest.” Only Cheniere Energy (NYSE: LNG) has been given the nod so far.

The government said the decision would come this summer, but has delayed it until the end of the (election) year.

Keeping the gas in the country would help keep prices low for Americans. Exporting it would create jobs but push electricity bills higher as natural gas prices rose closer to parity with $15.00 Asian gas.

The question I would ask?

Why should we export cheap natural gas to Asia while continuing to import near-$100 oil from elsewhere?

Others are asking the same thing...

Like NGV America, an organization representing more than 150 companies in the natural gas vehicle industry.

NGV believes since natural gas with a field price of $3.00 translates to $0.38 per gallon of gasoline equivalent, we should use our abundant resources to switch our cars, trucks, and buses from oil to natural gas.

With today's gasoline prices approaching $4.00 per gallon, switching to natural would offer savings even if it goes to $6.00 per mmbtu.

Companies betting on this approach include:

And the idea is gaining steam. Because the more you use, the more you save. A Class A truck buying 20,000 gallons of fuel per year could save $40,000 per year.

That's why 25% of transit buses and 40% of garbage trucks purchased last year run on natural gas. That number's expected to be 50%-70% this year.

If energy independence is a priority — and not simply a talking point — this seems like a win-win for investors and the country.

The export and transportation fuel debates will be important to follow in 2013, as they are both in incubation right now.

Either way, you can expect two things:

You can find more information on this here.