We had a banner day in the market yesterday as the bulls crushed the shorts and took control. At one point, 499 out of 500 stocks on the S&P 500 were up.

It would be nice if we could string a couple days together and head back to the top of the range. Don’t get me wrong — we are still in a downtrend, and it's better to sell the rips than buy the dips.

Every sector has been down this year with the exception of energy stocks. The energy sector is up more than 43%. Yesterday, many of the energy stocks I’ve recommended were up 4%–7% on the day alone.

There are two reasons for this: Russian shipping can’t get insurance, and China’s energy giants were told to stop reselling natural gas.

Exxon recently announced that it would not accept Russian state insurance for its Sakhalin-1 Russian Pacific project, and traditional Western shipping insurance from the likes of Lloyd's is unavailable.

Russian President Vladimir Putin decreed that the production of this field will now be run by a Rosneft subsidiary called Sakhalinmorneftegaz-Shelf.

The problem for Russia is that the brain trust that manages its oil fields is composed of foreign workers from companies like Exxon, Halliburton, and Schlumberger. The vast majority of these very smart, highly trained technical engineers have already packed their bags and left the country.

To understand what will happen to Russia’s 10 million bpd of oil production, you only have to look at Venezuela. Below is a 20-year chart of Venezuelan oil production. 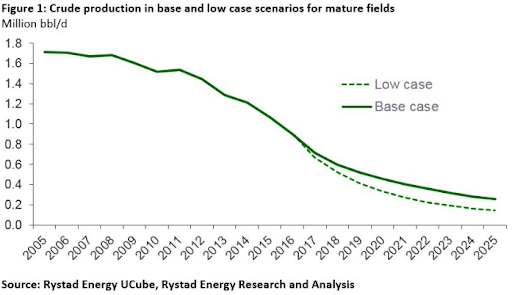 Since Hugo Chavez was reelected president again in 2006 and proceeded to vilify foreigners in the energy sector, oil production has fallen off a cliff. Venezuela was the richest country in South America in the early 1970s. Today, more than 5 million people have fled the country. Those who remain struggle with food shortages and lack medical care.

There is a reason petroleum engineers are paid six figures right out of college — it's because they are necessary to produce and transport oil, especially in the cold, vast, and inhospitable hinterland of Russia.

Look for Russian oil production to fall off a cliff over the next months and years.

In other energy news, the Chinese state-owned oil companies have been told by the powers that be to stop reselling liquefied natural gas (LNG) to the EU. Due to COVID lockdowns, China has had a surplus of LNG and has been making a nice profit reselling it to Europe.

However, the Chinese government wants to ensure that China has enough LNG to last the winter. This could be a blow to the EU’s plans to make up for cuts in Russian supply and will push the global price of LNG higher.

The good news for the EU is that gas storage is 92% full. It has been a warm autumn, which has also helped. The downside for the Old World is that storage alone isn’t enough to get it through the winter. LNG must be continuously replenished.

When all is said and done, I remain long oil and gas going into the winter.

While there is a risk that a global recession will crush demand and offset supply restraints, the potential reward far outweighs the potential downside.

I would have to see some signs of demand destruction before I sell. Otherwise, I plan on selling during a cold snap in February when natural gas prices typically hit a seasonal high.