Over the last several years, oil and natural gas production within the United States has exploded.

It was known that these resources were trapped in shale rock, but until recently there was no way to effectively reach them.

But with new technologies and improvements, the drilling technique fracking became an economical and viable way to extract these resources. And as this extraction became possible, people flocked to shale-heavy regions looking for work.

And oil fields that had previously lost potential, or gotten close, were once again profitable. Fracking lit up the energy news as it created a huge growth in domestic energy production.

That growth is just barely slowing due to the plunge in prices. But improvements in fracking continue to increase the estimates of U.S. shale oil and gas reserves, though they may have to be extracted later on...

Hydraulic fracturing, or fracking, began in its most familiar form in 1947, but only recently, after numerous improvements and advances, has it entered the spotlight in its use on the shale formations across the United States.

It is the process of injecting water mixed with sand and chemicals into horizontal wells within shale formations. The high-pressure injection creates fissures in the rock, held open by the grains of sand, which release the natural gas trapped inside. The diagram below from the EIA details the process: 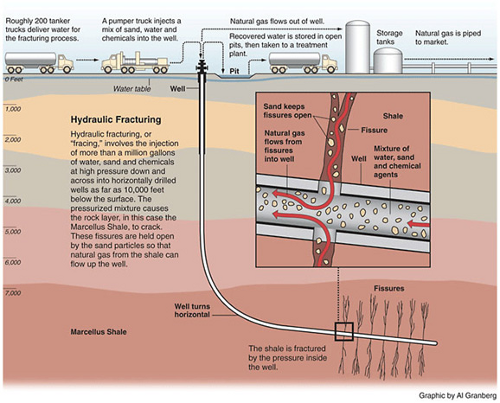 There are a number of shale plays across the U.S. with the potential for natural gas extraction through fracking. Major ones include:

These plays are being developed, though not in all areas. Some states are still weighing the benefits against the risks in deciding whether to allow drilling to proceed. Because, as with most things, there are two sides to the story.

Fracking All the Way

Advocates for fracking have praised it as the road to energy independence. Between 2010 and 2011, when the arguments really ramped up, U.S. oil imports decreased by 3% according to BP's Statistical Review of World Energy. And oil and natural gas exploration companies continued to release new estimates on technically recoverable resources in their drilling regions, boosting the projection of shale gas and oil potential in the U.S.

Due to fracking technology, the U.S. had an estimated 482 trillion cubic feet (Tcf) of technically recoverable shale gas, according to the EIA.

Fracking also became a major job creator, actually bringing the unemployment rate of the town of Williston, North Dakota, which sits atop the Bakken formation, to just above 1%. There are currently millions of frac jobs today.

And supporters continue to make the claim that burning natural gas is much cleaner than burning some dirtier fossil fuels like coal. Of course, there are still emissions, but they are greatly reduced. And since renewable power sources will need some time before they are able to compete with fossil fuels, natural gas is a good alternative.

But many environmentalists refuse to support hydraulic fracturing.

For all its benefits in increasing domestic production, fracking has raised a number of environmental and health concerns.

Vermont became the first state to ban fracking completely. Though this ban affects no existing shale plays, some believe it may set a standard for states that are debating the fracking issue.

The Department of Energy has been studying fracking for several years now, and while they do recommend a number of safety precautions, the economic benefits of fracking were noted

While there's no doubt that fracking can be controversial, I can tell you one thing that it positively changed... It's gotten the U.S. out of OPEC's chokehold.

The U.S. isn't the only one making use of fracking technology. The U.K., where fracking has been controversial topic, has just allowed a local company to drill a set of wells for the first time since the company created a small earth tremor after drilling in 2011. This will set the path for other companies to use fracking technology in the U.K., possibly creating a similar shale boom to the U.S.

That's all thanks to fracking.

So no matter which side you fall on in the fracking debate, you can be certain that it will probably be around for a while.

If you are interested in investing in fracking, you may enjoy these related resources from Energy and Capital: