The State of Oil Outside of the United States

From the end of World War II until very recently, the U.S. was a net oil importer - and seemed like it always would be. 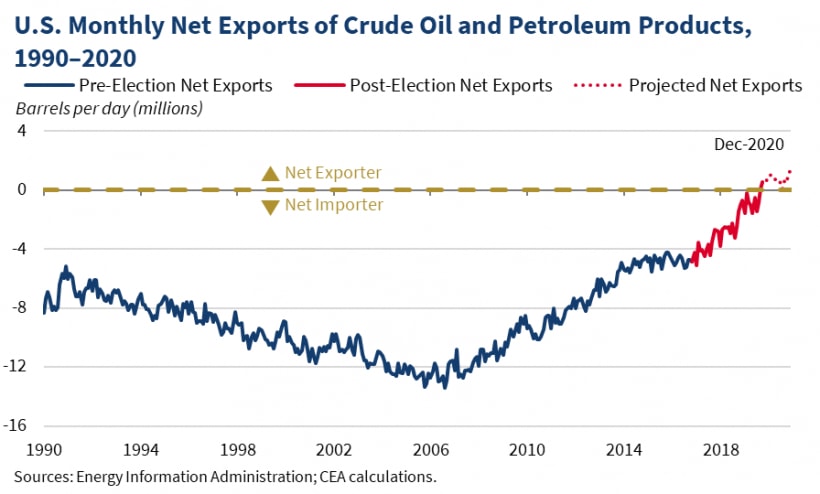 In 2015, as domestic oil and gas production ramped up, the U.S. abolished its longstanding ban on crude oil exports. Then, in 2019, it started to export more than it imported.

In the years since the U.S. shale boom took hold, the country has become a swing producer of the commodity.

But it wasn’t always this way.

Less than a decade ago, when the shale boom was just getting off the ground, the U.S. was little more than a destination for crude oil imports. It only exported refined petroleum products.

Today, even though it’s become a major part of the global oil market, the U.S. still has some stiff competition from a number of oil-rich countries.

Below, we’re taking a look at five of the biggest oil-exporting countries - all of which still export more than the U.S. - and how to invest in them through exchange-traded funds (ETFs).

The United Arab Emirates (UAE) is a confederation of city-states located at the eastern end of the Arabian Peninsula.

Despite being a small country (about the same size as South Carolina), it has always been a major oil-exporting power, and is a member of the Organization of Petroleum-Exporting Countries (OPEC). The UAE is estimated to have oil reserves of roughly 100 billion barrels - the seventh-largest reserves in the world.

In 2019, it overtook Saudi Arabia to become the world’s largest oil exporter. It accounted for 16.13% of global oil exports that year (the latest for which data is available). 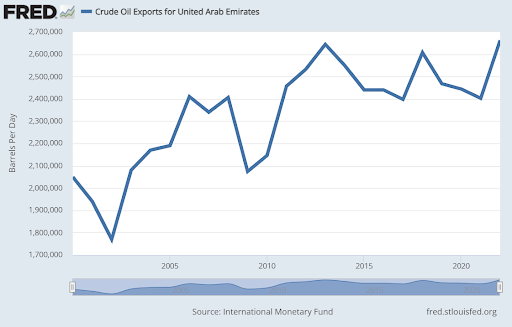 Oil and gas output accounts for more than 30% of Emirati gross domestic product (GDP), and so Emirati ETFs provide good exposure to the country’s energy industry. The iShares MSCI UAE ETF (NASDAQ: UAE) is worth a look for interested investors.

Saudi Arabia is the second-largest country in the Arab world by area, occupying the lion’s share of the Arabian peninsula.

It may not be the largest oil exporter anymore, but it remains the largest producer in OPEC, and possesses about 15% of the world’s oil reserves. It accounted for 11.54% of global exports in 2019. 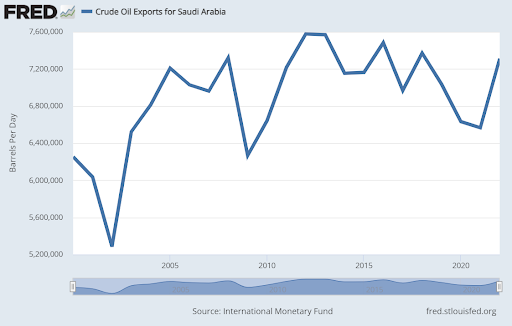 The Saudi economy is even more dependent on oil than the Emirati economy; the industry accounts for about 70% of the country’s GDP. Thus, the iShares MSCI Saudi Arabia ETF (NYSE: KSA) provides good exposure to the Saudi oil export industry.

Russia is the largest country in the world by area - and one of its largest oil producers and exporters. It has reserves of roughly 80 billion barrels, accounting for a little less than 5% of the global total.

Russia accounted for 10.53% of global oil exports in 2019. It is not a member of OPEC, but is a particularly important source of oil for Europe.

Oil exports account for about 4.9% of Russia’s GDP, and Americans can invest in Russian equities (including Russian oil majors like Gazprom) through the VanEck Vectors Russia ETF (BATS: RSX), although that’s not a good idea right now.

The U.S. and European Union levied sanctions against Russia in 2014 after it annexed the Ukrainian peninsula of Crimea. They ratcheted up those sanctions - crashing Russia’s equity and currency markets - after Russia launched a full-scale invasion of Ukraine in February 2022.

The U.S. has banned imports of Russian oil and gas in response to its aggression against Ukraine, and other countries may soon follow suit.

Kuwait is an OPEC member state located in the northeast of the Arabian peninsula. Like the UAE, it is a big player in the global oil economy despite its small size.

Kuwait has about the same area as Connecticut - but has the sixth-largest oil reserves in the world, and accounted for 7.55% of global oil exports in 2019. 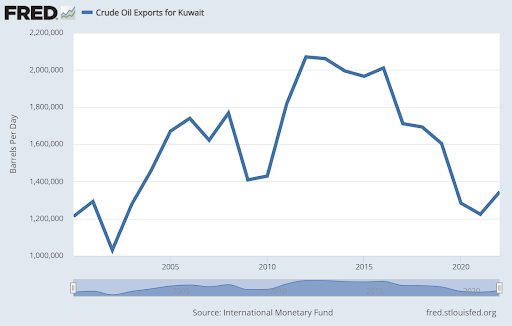 Oil and gas account for about 40% of Kuwait’s GDP, and so the iShares MSCI Kuwait ETF (BATS: KWT) provides good exposure to the country’s export industry for interested investors.

Like Russia, our northern neighbor is an example of a big country (the second-largest in the world) with a big role in the global oil market.

Canada has known oil reserves of 167 billion barrels - the third-largest in the world. It is not an OPEC member, but is an important source of U.S. oil imports. It accounted for 6.25% of global oil exports in 2019.

Canada’s oil and gas sector accounts for a little more than 6% of its GDP, but a variety of industry-specific ETFs provide direct exposure to it. The iShares S&P/TSX Capped Energy Index ETF (TSX: XEG) is worth a look for investors interested in Canadian oil exports.

Eyes on the Prize

U.S. shale may have changed the game, but it hasn’t knocked out the biggest players.

The next decade or so will be a big one for oil. Not only is the U.S. still holding strong against all odds, but it’s shifting the power dynamic of the market.

China is on the rise… Mexico is on the mend... Canada is fighting back... OPEC as we know it may not exist for much longer…

Don’t let today’s low prices scare you into missing out on tomorrow’s gains. Oil has weathered downturns and energy breakthroughs to become one of the oldest and most profitable energy investments in the world.

It’s all just a matter of putting your money in the right place.