I love a good fight.

When it comes to U.S. energy production, I can't think of a more controversial topic since Edwin Drake drilled his well on Pennsylvania soil over 150 years ago...

It all revolves around hydraulic fracturing.

Here's the part that most people don't seem to realize: Without fracking, the entire North American oil and gas industry would come to a screaming, painful halt. This is the reality we all need to face, regardless of protesters who abhor the fracturing process.

Let's start from the beginning...

Hydraulic fracturing is a simple process, really. It's used to create fractures in a rock formation by injecting the rock with a mixture of water, proppant (think: sand), and chemicals.

Once opened, the fissures allow the oil and gas resources to flow more freely into the well, which can then be extracted through the well bore.

Here's a video of this procedure in action.

In 1949, another company came along and began using its patented HydraFrac Process. You might have heard of the company before... It goes by the name of Halliburton.

The controversy surrounding the technique and its impact on the environment didn't reach a fever pitch until a few years ago.

First let's dive into the gripes people have with hydraulic fracturing...

Since the composition of this frac fluid is the issue, it's good to know 99.5% of it is water and sand. 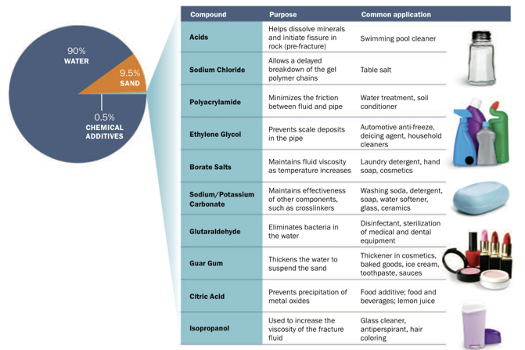 And here we come to the point of no return for most anti-frackers: water contamination — that is, the threat of this frac fluid reaching someone's water source.

There have been a few recorded cases of improperly-stored spent frac fluid leaking into local water tables at ground level, and a few cases in which it has contaminated local water tables on its way down into wells. But the main environmentalist worry about fracking - frac fluid bubbling up into water tables from wells across a wide area - has never actually materialized. 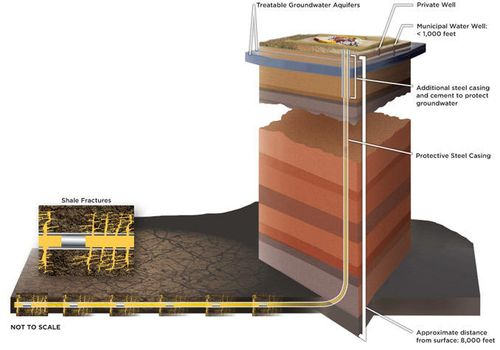 In a typical well, the rock formation being fractured lies at a depth of more than 7,500 feet. Water aquifers are usually found at a depth of 1,000 feet. Between the two is a mass of solid rock.

When I talk about the "picks and shovels" of hydraulic fracturing, I'm referring to investing in companies that deal with the two biggest components in the process: sand and water.

Keep in mind that each shale well requires about five million pounds of proppant. Proppants are materials used to keep the fractures in the rock open. For the most part, we're talking about sand or ceramic material.

One play that warrants a second look from investors is U.S. Silica Holdings (NYSE: SLCA), which mines, processes, and sells commercial silica in the United States.

In other words, it's selling frac sand to the oil and gas industry.

And as far as performance is concerned, this pick would have handed you 15x returns in the last two years, as it recovered from a long decline in the late 2010s…

If one of the most controversial issues when it comes to fracking is wastewater — then the companies solving how to deal with it will become infinitely valuable for the future of the U.S. shale boom.

A few of you may have heard or even seen the wastewater ponds associated with hydraulic fracturing operations.

I'll be the first to tell you it isn't a pretty sight... 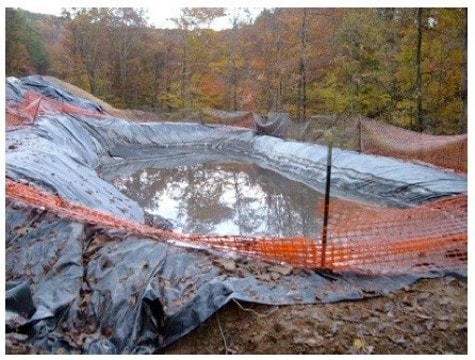 More traditional water plays include Xylem (NYSE: XYL), whose offerings include a variety of water sourcing, transport and testing services for fracking operators.

That's just when people began to notice the flood of oil from North American shale formations like the Bakken.

And it certainly didn't start at the birth of the shale boom, when George Mitchell was tinkering with horizontal drilling and hydraulic fracturing back in the early 1980s in the Barnett Shale...

Believe it or not, this technology has been around for more than seven decades.

The first time an oil well was successfully fractured was back in 1949, at the Hugoton gas field in Kansas — although things were quite different back then. Rather than injecting millions of gallons of water, like drillers do today, Stanolind Oil actually used a thousand gallons of gelled gasoline to fracture the limestone at a depth of more than 2,400 feet. (Can you imagine how the use of napalm would go over today?)

Fortunately, companies have gotten much better at the process — and investors have been cleaning up ever since.

While we've been pumping wells with water, sand, and chemicals for 68 years, the uproar didn't really start until the U.S. kick-started its tight oil and gas boom in the mid-2000s.

And let's be honest about something: No administration will ever place a blanket moratorium on hydraulic fracturing in the United States. And the few states that have banned fracking won't really affect the industry at all...

Truth is a nationwide moratorium would cripple the U.S. oil and gas industry. That's not hyperbole. It's the reality of our country's energy situation.

There are millions of frac jobs worldwide. Since 1949, well over a million frac jobs have been performed on oil and gas wells in the U.S.

Fracking is what has allowed the U.S. to overtake OPEC in the oil game.

The cost to build and operate wells in the oil-rich U.S. shale basins has decreased by millions over the past few years.

To say the shale boom has been "explosive" would be an understatement.

Back in 2010, insiders were projecting that production in the Eagle Ford Shale would be 800,000 barrels per day by 2016 (for perspective's sake, that amount equates to approximately 68% of the state's average production in 2010)...

Those insiders were off by a long shot. Oil production in the Eagle Ford passed that mark early — four years ahead of schedule!

And in case you were wondering, there wouldn't be a single drop of production in the Eagle Ford, Bakken, or any other of the now-famous shale plays now in the media spotlight without hydraulic fracturing.

A few years ago we were talking a lot about how game-changing drilling technology is quickly becoming the norm in the biggest shale hot spots in North America.

For proof of just how effective technology has been in producing North America's resources, look no further than the change in production time: The average well in the Eagle Ford took about 40 days to drill in 2010. In 2013, just three years later, companies cut that time in half.

So, where do we as investors go from here?

Well, today I want to talk about two ETFs out there for individual investors.

The first is the SPDR S&P Oil & Gas Equipment & Services ETF (NYSE: XES). It contains a broad swath of pick-and-shovel plays on fracking, including the aforementioned U.S. Silica (its second-largest holding), as well as traditional oilfield services names like Halliburton and Schlumberger.

The second is the Invesco S&P SmallCap Energy ETF (NASDAQ: PSCE) - the closest thing on the market to a pure-play fracking ETF. Its top holdings include a who’s-who of American oil and gas companies working in the Marcellus shale formation, the Delaware basin and other fracking hotspots - including  PDC Energy, Range Resources and Matador Resources.