Brent vs. WTI Crude Oil - What is the Difference?

It’s used for cooking, transportation, and heat. Wars have been fought just to control small portions of it…

Did you know oil is used in gum? It’s part of what makes gum so soft and chewy.

We couldn’t function without it.

That’s why it’s been such a hot commodity for so long.

If you’ve been interested in oil investing for any time at all, you’ve probably seen oil prices go up and down…

And you’ve probably noticed that oil seems to have two different prices.

One for West Texas Intermediate (WTI), and one for Brent Crude.

You might not think that the slight difference in price means much… but the difference is actually vital — and one that every oil investor needs to understand. But before we get into the difference between Brent and WTI, let’s discuss each on their own.

The town of Cushing, Oklahoma, is tiny, and, if not for oil, would be unknown. But in 1912, drillers discovered oil, and the Cushing Oil Field roared into existence. The field is only 10 miles by 3 miles, but in 1915, just three years after its discovery, it was producing more than two-thirds of the oil in the Western Hemisphere.

Cushing was a major spot for oil for decades and has been the delivery spot for contracts and price settlements for WTI for more than 30 years.

Western Texas Intermediate had a good run while it lasted, but now that ride is over.

If we're going to be honest here, WTI’s fate was sealed years ago — and the latest proclamation that Brent crude has overtaken WTI as the global benchmark should be little more than an afterthought.

The rise of Texas tea started back in the early 1980s, when the U.S. government's decontrol of oil prices changed the trading mechanics of crude oil, which led to WTI’s commoditization.

At the time, our domestic production was flowing at a rate of 8.6 million barrels per day, with approximately 30% of that oil coming from Texas.

What's more, it was some of the highest-quality crude that U.S. refiners could get their hands on...

But WTI's reign as the global oil benchmark was overthrown by Brent crude in 2013.

Why is Brent crude more expensive than WTI?

Simply put, the preference for Brent crude today stems from the fact that it may be a better indicator of global oil prices. Brent essentially draws its oil from more than a dozen oil fields located in the North Sea. It's also still considered a sweet crude, despite having a higher sulfur content than WTI.

Although most Brent is destined for European markets, it's already used as a price benchmark for other grades.

Bloomberg reports: “Brent represents the Northwest Europe sweet market, but since it's used as the benchmarks for all West African and Mediterranean crude, and now for some Southeast Asia crudes, it's directly linked to a larger market."

For years, the price differential between the two has only been a few dollars.

The problem for WTI has been the flood of oil flowing into Cushing from areas like North Dakota and Canada. We talked about the production boom taking place in North Dakota previously.

Brent becoming the new global benchmark is something we've seen coming for years — and we weren't the only ones with this foresight...

The Saudis ditched WTI as a benchmark along with Kuwait back in 2009 for the heavier Argus Sour Crude Index (ASCI), based on the medium sour crude from the Gulf of Mexico. Iraq followed suit about a year later.

The Battle of the Benchmarks: Brent vs. WTI

I have no doubt you’ve heard of the major benchmarks before today.

Yet I’m always surprised that most investors don’t take the time to learn the difference between them.

Just remember, not all crude oil was created equal.

There are actually a variety of factors that we use to differentiate between them, such as the API gravity (the measurement of an oil’s density relative to water).

Of course, you also have to consider how sweet or sour the crude is, which tells you how much sulfur it contains. “Sweeter” crudes have less sulfur, which makes them much easier to refine into products like gasoline or diesel, and thus much more attractive to refiners.

Here’s a look at how some of the world’s benchmarks stack up against each other: 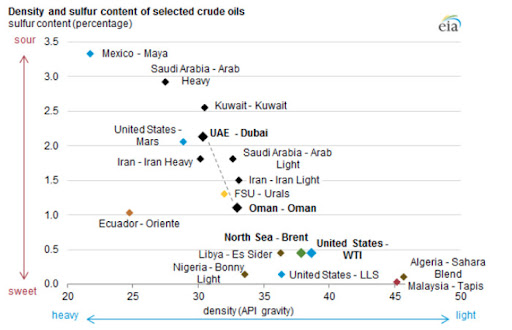 I have a feeling you’ve heard of a few of the major benchmarks.

West Texas Intermediate, or WTI, is perhaps the most famous. This is the light, sweet crude that flows out of Texas wells in the Permian Basin, and it is far more desirable than most, which is why buyers are willing to purchase it at a premium.

You see, WTI crude has an API gravity of 39.6 and only contains approximately 0.24% sulfur (in order to be considered “sweet,” the oil has to have less than 0.5% sulfur).

We’ve talked about Permian Basin oil drillers many times in the past here, and that won’t change anytime soon.

There are only a handful of countries that can exceed that amount today.

In fact, if Texas were to join OPEC, it would be the oil cartel’s fifth-largest member.

But despite the high quality of West Texas Intermediate, WTI is currently trading at a discount compared with another major oil benchmark: Brent crude.

Brent crude is actually a blend of oil from more than a dozen oil fields located in the North Sea. Although considered both light and sweet, Brent is slightly heavier than WTI, with an API gravity of 38.06 and a sulfur content of 0.37%.

At some of its worst moments, the price spread between Brent and WTI reached as high as $8 per barrel.

Back then, we predicted that the spread would get much thinner thanks to increasing exports out of the United States — and we were spot on.

So it was only recently that U.S. companies were able to tap into rising global demand.

Regardless of how far behind they were, U.S. producers hit the ground running. Since Congress lifted the ban, the West Texas oil field has nearly doubled its daily production levels.

And it’s still just getting started.

To say U.S. oil production is booming would be a gross understatement.

The United States recently reclaimed its crown as the world’s top oil producer, averaging just under 20 million barrels per day.

Of course, tightening global supply will ensure that there will be demand for the light, sweet Texas tea.

I fully expect crude prices to march higher throughout the rest of the year, if not the decade.

This bullish cycle is just beginning.