They call it “the night of the beating.” And believe me, Hollywood couldn’t write a more evil and twisted plot.

What’s reported to have occurred in early November 2017 appears to be true.

During that time, roughly 400 of Saudi Arabia’s most powerful people, including princes, business tycoons, political activists, and state ministers, were invited to meet with King Salman bin Abdulaziz and Prince Mohammed bin Salman of the Saudi Royal family at the Ritz-Carlton in Riyadh.

Instead, however, these powerful people were bagged, tagged, and trucked off to undisclosed locations. Upon arriving at these “black sites,” the upper echelons of Saudi society were beaten, tortured, and forced to reveal sensitive information that led to a mass seizure of their assets.

The message was clear. Never, EVER cross King Salman or Prince Mohammed.

The Saudis are without a doubt OPEC’s evil heel.

But this scandal is only part of the backdrop that complicates the oil market right now.

Despite this and other headwinds, I’m betting crude prices hit $60, and soon. Here’s why.

OPEC+ Is Done for, but in a Last-Gasp Effort…

OPEC+ is done for.

The continued infighting on production cuts has confirmed that when the going gets tough, OPEC+ members will pursue their own interests first.

Qatar’s exit from the cartel to pursue natural gas and Iraq’s noncompliance on oil production are prime examples. And with Libya now stating it also plans to ignore production cuts, there’s an added layer of issues the organization must address when OPEC officials meet on November 30.

Despite these headwinds, in a last-gasp effort, I expect the more powerful members of OPEC+ — namely Saudi Arabia, Russia, and Iran — will find a way to work together and keep production levels down, even if only in the near term.

And that should be a catalyst to help boost crude prices over the next few months.

But to hit $60-per-barrel prices, it's going to take a second catalyst.

When COVID-19 hit, the global oil market, like most industries, suffered greatly. But unlike oil and energy, most other sectors are already on their way to recovering.

We can see this plain as day when looking at popular ETFs across the oil (black), tech (pink), homebuilders (blue), healthcare (red), and consumer staple (green) sectors. 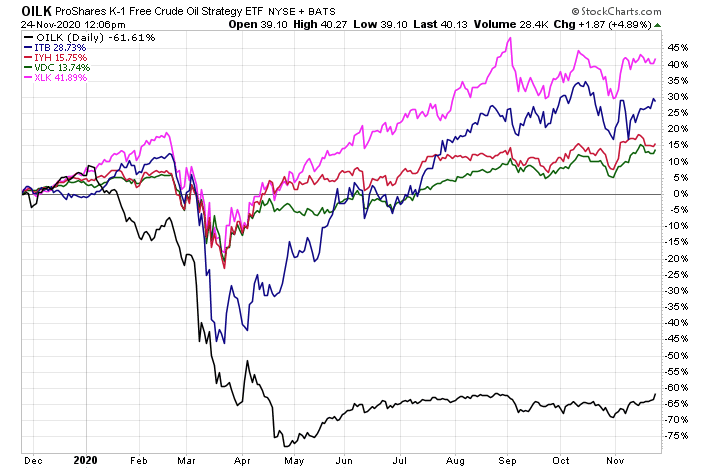 This tells me two things.

As we move closer to a full economic recovery, crude prices should rise exponentially faster than the rest of the greater market next year.

One of the main drivers behind the coming upswing in oil prices will be tied to a massive increase in global shipping as economies worldwide return to normalcy.

It's no secret that when COVID hit, global shipping saw a dramatic slowdown. But new data show shipping is spiking again. Globally, the average number of container vessels arriving weekly at ports worldwide rose from 8,722 in mid-June to 9,265 by early August, just 3% shy of 2019’s August levels. 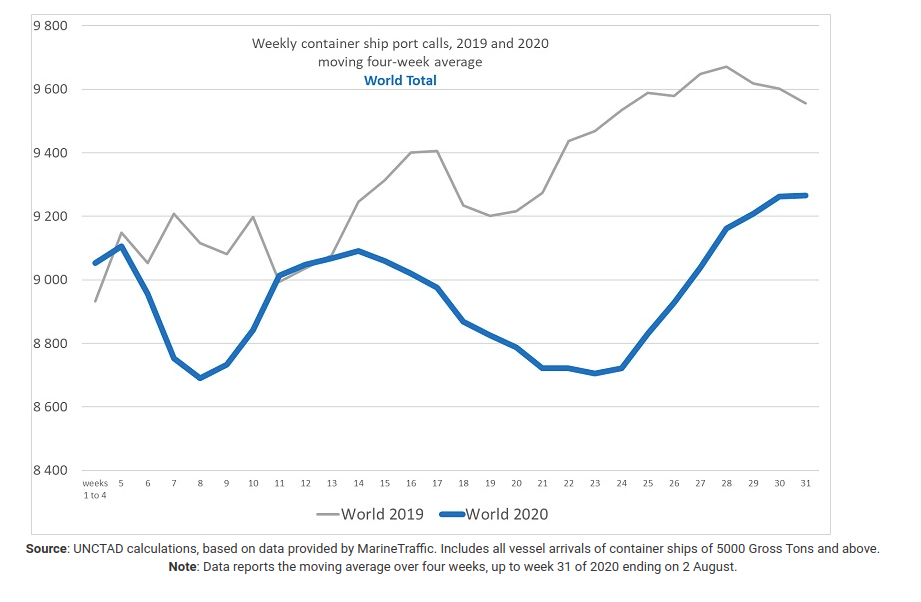 And these numbers continue to increase. DHL reported a 9.2% increase in the amount of active 20-foot equivalent unit, or TEU, container fleets this month. A continued rise in this volume of shipping should help fuel a rise in oil prices as well.

Roughly 90% of the world's goods are shipped via container ships. And maritime shipping companies rely heavily on oil to power their massive fleets, which, as spending increases and shipping volumes soar, should be a boon for oil prices.

And because of this factor, coupled with OPEC’s expected production cuts, I’m banking on a fast recovery for crude in the first half of 2021.

With $60 oil inevitable, I’ll dive into exactly how I plan to play this next Friday.

I hope you all had a great Thanksgiving and have a great weekend.

Editor’s note: There’s a new, revolutionary technology that's projected to grow even faster than the electric car. This new-age tech can power 90 million-plus homes and buildings at a fraction of existing costs. America’s biggest companies are already all-in on this tech, including Google, Amazon, Walmart, and Target.

And you can claim your stake before the rest of the market catches wind of this incredible moneymaking opportunity. Click here to learn more.