Wind Power Needs its Own Railroads

All That Power Needs to Travel

Actually, railroads are not how wind energy gets around. But like we rely on trains and pipes to carry our supply to market, wind-generated electricity also needs an extensive infrastructure in place.

A lot of current wind farms are placed in highly lucrative locations like the Oklahoma panhandle, yet are cut off from grid systems outside their states. This means companies are losing opportunities to sell energy to outside consumers.

Any loss of business is bad for a growing market, and so startup Clean Line Energy is working to fix the problem. The company plans to build several direct current wires across states to spread the use of wind energy. 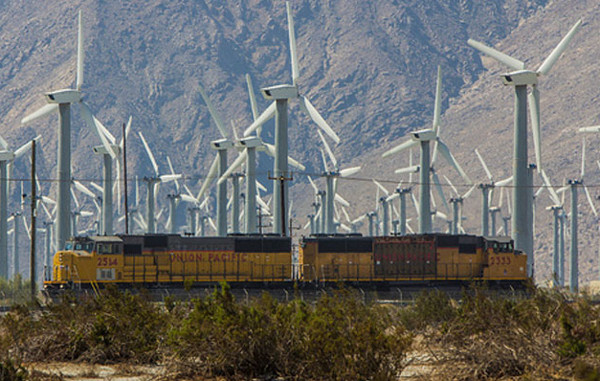 Some of the lines the company has planned include the Rock Island Clean Line which would stretch from Iowa to Illinois, the Grain Belt Express stretching from Kansas to points east 780 miles away, and the Plains Eastern running from the Oklahoma panhandle to Memphis, Tennessee.

These projects are expected to cost about $10 billion and cross mostly farmland and fallow space to avoid cutting off other infrastructures.

Clean Line has raised more than $100 million already from investors such as National Grid, and aims to build even more wire infrastructures between 400 and 700 miles long across the country.

One of the biggest obstacles — not counting the billions of dollars that the company is confident it can raise — is approval from the individual states and landowners. Still, Clean Line president Micheal Skelly asserts that with those approvals, construction could begin as early as 2017.

Of course, another economic hindrance may not come from having to lay down the wire lines, but rather from the companies who plan on using them. You see, renewable companies often rely on government subsidies to keep their spending up and their energy prices low.

However, those subsidies cost the government billions every year. Using the Energy Information Administration's 2014 estimates for wind power generation, if every wind farm in the country were eligible for subsidies, it would cost $4.6 billion per year!

Understand though, the growth of wind power has encouraged a whole new round of private investments. Since 2008, the wind industry has brought in about $100 billion of investment, which is a huge boon to not only wind companies, but the manufacturing sector that supports them.

The spread of wind energy across the country would, with the allowance of state energy trades, help some states meet the requirements of the new Clean Power Plan. And with the growth of private investment, Clean Line's $10 billion goal could be within sight... if they present a cost-effective business plan to investors.