Putting the Wind in Your Portfolio's Sails

The recession has wreaked havoc on the wind industry, but all indications point to a strong recovery in the second half of the year.

This is partly due to the inherently cyclical nature of the wind market, which generally does better after June when prolonged good weather returns to much of the northern hemisphere.

As an energy investor, catching this rebound could prove to be lucrative for your portfolio. Just look at how adverse market conditions knocked the wind out of this market: 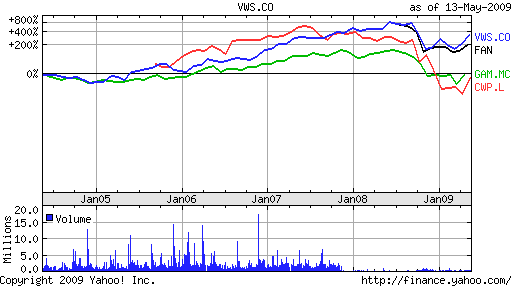 In some cases, the multi-hundred percentage point gains of the past few years were erased. It was brutal when it was happening. And even worse if you owned a position in a wind company.

But now, the silver lining is emerging: you can purchase wind stocks for their 2007 prices (or lower) and ride them as they go back to their 2008 highs.

But don't take my word for it. Here's why the wind industry will inevitably rebound.

I make no bones about saying the Obama election was a cleantech profit catalyst. Take a look at some of those same companies over the last year, rather than the last five: 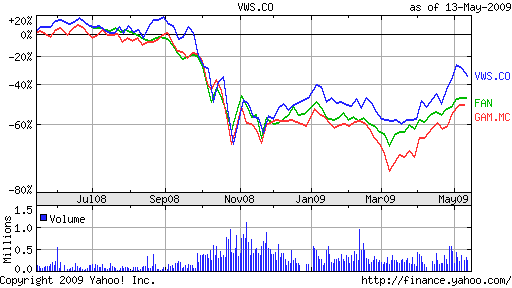 November was a clear turning point for the industry because of the obvious discrepancy between the two candidates' support for clean energy.

And the support is only growing.

I've exhaustively covered the ideas of a national renewable energy standard (RES) and carbon trading — and what they mean to energy investors — in these pages. Slowly but surely, they are becoming a reality.

In fact, the House reached an agreement just yesterday to include a 15% by 2020 renewable target in the massive climate and energy bill that's currently being debated. In case you're still out of this profitable loop, an RES mandates the increased use of renewables. It forces it. It guarantees it. It makes it law.

And you can invest in the companies that will make it happen.

Tell me, when's the last time you heard of the government forcing the expansion of industry by law? Mandating its growth targets?

You don't get any better industry visibility than that.

What's more, utilities know they're about to be forced to adopt renewables, so they're preparing in anticipation. . . initiating new solar and wind projects now before the measure even takes effect.

The recession and resultant credit crisis all but made funding for cleantech projects disappear.

But the recently-signed stimulus allocated $56 billion for clean energy via grants and tax breaks over the next 10 years. And that's on top of a new $15 billion per year budget to fund renewable energy programs.

Once those funds are released, The Street is going to flock to that money's final destination: clean energy companies.

A good portion of it will be going to wind companies, and their stock prices will begin to reflect the newfound source of essentially free funding. If you want to profit, you need to take a position before the Federal billions start flowing.

For perspective, consider that wind energy currently only makes up about 1% of the energy mix in the U.S. The Department of Energy has said that we could get to 20% by 2020. That implies a 1,900% increase in the size and value of the wind market.

And it's not too far out to think certain wind stocks could climb by the same amount. The chart above shows 800% gains in five years. Imagine a decade-long Federal push for wind energy.

The profits will be even greater. They key is finding the companies that will get the funding and buying shares before the money heads their way.

The Alternative Energy Speculator has already had success playing the initial stages of this wind rebound. We're sitting on a 25% gain from the First Trust Global Wind ETF (NYSE: FAN) in addition to a few other specialized plays, including the important aspect of energy storage.

If you want in on the action, use this report to get started. It spells out why the wind industry is poised for a surge in growth and how you can ensure you get a piece of the three wind stocks I think will double.