An Inconvenient Truth About Electric Cars

Oil and gas investors cheered on Friday after getting a gift from President Trump.

A reversal of the Obama administration’s ban on Arctic drilling.

Of course, this gift is really more of a friendly gesture than something that actually has any real value.

This isn't a criticism, by the way. It’s merely an observation of truth, which is this...

When Rex Tillerson was chosen to serve as the U.S. Secretary of State, he was quickly accused of being nothing more than the new “inside guy” for ExxonMobil. And perhaps there’s some measure of truth to that. But even having a guy on the inside doesn’t mean the basic fundamentals of supply and demand become insignificant.

You see, we use oil primarily as a transportation fuel.

Sure, there are other uses for crude, but the bottom line is that our reliance on the internal combustion engine is what makes oil relevant. And that could soon change.

Essentially, the latest data indicate that gasoline demand has peaked and will soon begin to decline.

Today, the oil market is oversupplied by as much as 500,000 barrels per day. Moreover, there’s a massive amount of oil in storage, and if crude does cross the $60 mark, the U.S. has a wealth of shale it can cut loose.

The fact is, the demand for oil today does not necessitate the need for new drilling operations in the Arctic. And it won’t in the future, either.

From Crude to Electrons

According to researchers at MIT, by 2030, electric vehicles will be a dominant mode of transport.

This is largely due to the speed at which lithium-ion battery prices are falling, which is resulting in more competitive pricing for electric vehicles. 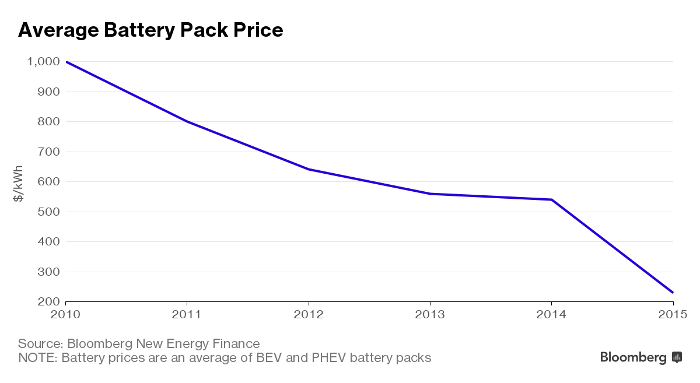 Since 2010, the price of lithium-ion batteries for electric cars has plummeted 65% and will continue to fall even further.

Now, in 2013, the IEA estimated electric vehicles would reach cost parity with internal combustion vehicles when battery costs hit $300 per kWh. That prediction was set for 2020, but in 2016, those battery costs fell to $273 per kWh. And this is why we now have new 200-mile-range electric cars hitting the showrooms with price tags below $40,000.

Of course, this is just the beginning.

Now, if electric cars become the dominant choice for passenger travel in about 13 years, we’ll end up consuming less gasoline than we do today. This does not bode well for the oil industry. In an effort to stay in business, no oil company is going to spend the time and money to produce Arctic oil when that oil won’t even be needed in the future.

And by the way, it takes an extraordinary amount of time and money to drill in the Arctic. Just ask Shell, which burned through $7 billion in the Chukchi Sea before abandoning that Arctic drilling operation. And this is after the company discovered oil and gas in that region more than two decades ago.

In a $50 oil-price environment it’s not so bad to abandon that search because it’s expensive. Shell has enough resources already.

So, yes, President Trump signed an executive order to open up the Arctic again to drilling. But it doesn’t really mean anything, at least not to energy investors.

We know the future of personal transportation will not continue to rely on an outdated internal combustion engine. We also know that while you can still make some money in the oil and gas game, the real money is in homegrown electrons, induction motors, and, of course, lithium-ion batteries.

P.S. Having taken full advantage of the electric car movement — profiting handsomely along the way — I’ve used some of those gains to invest in an even more lucrative industry: legal cannabis. While this isn’t a play on energy, it is without a doubt the most lucrative investment opportunity for 2017. And I have the numbers to prove it. Click here to see for yourself.

How to Invest in the Future of Energy
A meeting of the most important people in the energy market can tell us one thing: The future of energy will be a profitable one, if you know how to play it.
Will Trump Fast Track the Hyperloop?
A great way to make American great again is to make it the home of the Hyperloop.
Utah Bans Tesla (NASDAQ: TSLA), but the Stock Just Hit Record Highs
Although Utah will not allow Tesla to sell vehicles within state borders, the stock continues to impress.
Hydrogen Fuel Cells: The Downfall of Tesla?
Lithium has been the front-runner in the battery technology market for years, but that is all coming to an end. Elon Musk is against them, but Jeff Bezos is investing heavily in them. Hydrogen Fuel Cells will turn the battery market upside down and we've discovered the tiny company that is going to make it happen.