Why Psychedelics Stocks Are Crushing It

The first shot was a piece of cake.

The second knocked me on my ass.

Last Friday, I got my second shot of the Pfizer COVID vaccine.

Since it barely affected me the first time, I didn’t expect much.

By 10:00 p.m. that night, I was shivering under my blankets and taking Tylenol to fend off some pretty extreme joint and muscle aches.

I ended up staying awake for about 40 hours until a Xanax and a 10 mg edible sent me off to see the Sandman.

By Monday morning, I was finally on the road to normalcy. Not 100%, but enough to get in a light CrossFit workout.

Still, I’m not going to lie: It sucked.

Truth is, I was actually on the fence about getting it.

I never get the flu shot and have only been hit by the flu once in my adult life.

That being said, I’m heading to Europe later this year on a research junket, and without proof that I’ve been vaccinated, it might be very difficult to get in.

Now, after getting vaccinated, I did not take a selfie and post it on social media.

Mostly because I think it’s a stupid trend.

It’s almost as if it’s become a sort of rite of passage.

“Hey, look at me. I’m being responsible!”

You know, I always wear condoms during sex because it’s the safe and responsible thing to do. But I’m not going to take a selfie with a used condom to prove I’m doing what I can to protect myself from getting an STD.

I don’t know. Maybe I’m just getting older and more curmudgeonly. And it’s not like I’ve ever really played well with others anyway.

Nonetheless, I’ve officially been vaccinated, and in a couple of weeks I’ll be getting my boots back on the ground, investigating the companies that are ultimately going to deliver the gains that keep me relevant in this business. Like, for instance, my...

Last week, a psychedelics company called MindMed announced that it had been approved for a Nasdaq listing.

Here’s what happened to the stock after that announcement … 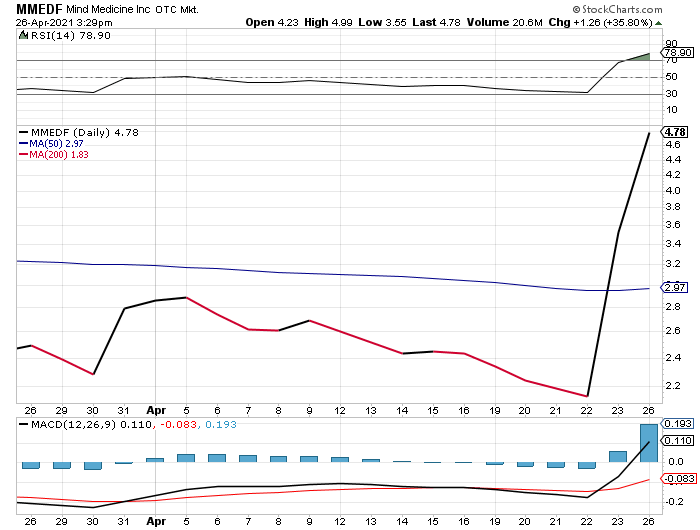 I first recommended MindMed to readers of my Green Chip Stocks investment community last year at $0.39 a share.

Today, those who took my advice are sitting on gains in excess of 1,000%

And this thing isn’t even close to topping out yet.

Of course, there are about a half-dozen other psychedelics stocks that’ll give you more bang for your buck if you buy them today.

I hit on some of those last week, noting that both Bionomics (OTCBB: BNOEF) and IntelGenx Technologies (OTCBB: IGXT) are positioned very well to get a major shot of steroids after the biggest psychedelics company, atai Life Sciences, goes public later this year.

This is the Peter Thiel-funded psychedelics company that’s expected to raise $100 million through its IPO.

Here’s what I wrote about those companies last week…

One of those companies is Bionomics (OTCBB: BNOEF), which is a clinical-stage biopharmaceutical company that recently partnered with EmpathBio.

EmpathBio is a biotech player that’s developing psychedelic medicine derivatives in conjunction with digital therapeutics to deliver treatments for PTSD.

You’ll be hard-pressed to find anyone else who knows about this company right now. But EmpathBio is a subsidiary of atai. Make no mistake: When atai goes public, Bionomics should get a very nice bump because of its deal with EmpathBio.

Another stock that’s likely to get some upward momentum on the atai IPO is IntelGenx Technologies (OTCBB: IGXT), which recently announced a deal with atai that will have IGXT developing compounds for the treatment of mental health diseases, some of which have psychedelic properties.

It's also worth noting that atai acquired 25% of the company through an equity investment, which generated about $12 million for IGXT.

While investors in both Bionomics and IntelGenx have seen double-digit gains in just the past week, there are three more psychedelics stocks that are poised to get a big pop within the next three weeks. They are as follows…

Why is this important?

Because without the psychedelic effects and hallucinations, the company can synthesize the drug without the regulatory hurdles of dealing with a Schedule 1 controlled substance. This gives this little gem a major advantage in terms of getting through clinical trials at a much faster rate than most other psychedelics companies.

You can learn how to get access to the names of all three of these stocks by becoming a member of Green Chip Stocks today.

Or, to learn more about the burgeoning psychedelics industry and the stocks that are mostly likely to repeat the success we’ve just seen with MindMed — 1,000% gains inside a single year — click here now.