Deadly Droughts Are Doubling These 7 Stocks

Temperatures reached over 120 degrees Fahrenheit in the oil-rich Iranian province of Khuzestan, and water shortages were making it difficult for people to, well, survive.

As a result, huge protests popped up all around the country, and government officials gave the go-ahead to counter those protests with live ammunition. 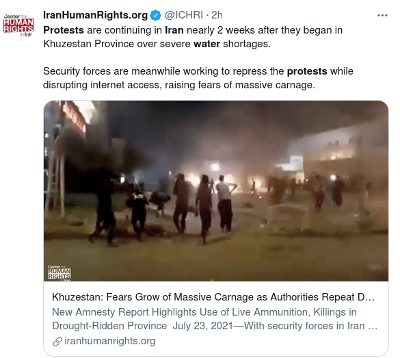 Of course, compared with how many people will die because of the dual threat of heat waves and water shortages this summer, eight will look like a minor accounting error.

And what’s worse is that this is the new normal.

While I have no intention of using these pages to debate the realities of climate change, to deny that extreme weather events such as these recent heat waves and droughts are forcing the world to acclimate to a “new normal” would be foolish.

That being said, we’ve known for years that this was going to happen.

The Profitability of Threat Accelerators

Back in 2014, high-level military officials penned a report titled National Security and the Accelerating Risks of Climate Change.

In that report, you can find the following warning:

In many areas, the projected impacts of climate change will be more than threat multipliers; they will serve as catalysts for instability and conflict. In Africa, Asia, and the Middle East, we are already seeing how the impacts of extreme weather, such as prolonged drought and flooding — and resulting food shortages, desertification, population dislocation and mass migration, and sea level rise — are posing security challenges to these regions’ governments. We see these trends growing and accelerating.

While we can always debate the value of the various natural resources we rely on for everything from cellphones to building materials to transportation fuels, there is one undeniable truth: NOTHING is more valuable than water.

This is certainly not something investors typically get excited about, especially those of us who have never lived in a world where we’ve been denied access to robust supplies of fresh water.

But you know the deal…

And the looming water shortage is a crisis of epic proportions.

To clarify, this crisis is less about water shortages and more about water scarcity, which continues to worsen as rapidly growing cities across the globe pressure water resources while the world cooks under the blanket of increased heat wave conditions.

The good news is that these water shortages can be managed and even reversed with proper urban planning, new technological advances in agriculture, and massive upgrades in water infrastructure.

While such things have been trivialized in the past, the very real impact of consistent extreme weather events is starting to force action — not just by way of government mandates but in the private sector too, where some of the world's largest corporations are now investing in the type of water infrastructure that will help them maintain a competitive advantage as water supplies shrink.

Smart investors are doing the same.

Take a look at this image, which charts the performance of seven of the most successful water ETFs…

It took five years for most of these ETFs to double in value.

They’re going to double in value again but in just half the time thanks to increasing populations in water-strapped countries, the continued migrations into cities, and the relentlessness of those heat waves and droughts that will not let up anytime soon.

Bottom line: You absolutely should have some exposure to the water space. These ETFs are all great options although I’m the most bullish on the Ecofin Global Water ESG Fund (NYSE: EBLU) because of its focus on some of the best-performing assets in utilities, agriculture, filtration, treatment and testing, engineering and construction, and pipes, pumps, and valves.

To quote the gifted poet W. H. Auden: "Thousands have lived without love, not one without water."

I don’t care how bullish you are on tech, energy, agriculture, or retail — none of this stuff exists without water. We don’t exist without water.

So given the reality of water scarcity around the world, which is only going to get worse in the near future, we’d be fools to not include some water assets in our portfolio.