Why ExxonMobil (NYSE: XOM) is a Terrible Investment

Last week, shareholders of ExxonMobil (NYSE: XOM) approved a proposal that, according to Reuters, calls for the company to disclose the impact of compliance with global climate change guidelines on its business.

Over the past few years, climate change activists have exercised a number of different options in an effort to get corporate polluters to face up to the burdens they place on the planet and on taxpayers who are often left to foot the bill for environmental damage, in one way or another.

One that has been quite popular is divestment.

If you're unfamiliar with fossil fuel divestment, this is actually something that was started back in 2011 by a group of climate advocates who decided to take a page out of the handbook of successful anti-war and anti-apartheid divestment campaigns from the past.

For them, there was a moral argument to be made for divesting from industries that are among the biggest sources of CO2 emissions. And so began a campaign that's grown quite rapidly over the past few years.

I actually find the divestment movement to be an honorable one, as it allows the power of free markets and free will to offer a solution for mitigating the threat of climate change, as opposed to mandates delivered by governments that subsidize fossil fuels — the largest source of man-made CO2 emissions.

Another measure investors have taken is to force individual companies to report on their climate change impacts, as these impacts could very likely have an economic impact on those companies in the near future.

This is what a group of shareholders recently did with Exxon by forcing the company to acknowledge their proposal.

The Risk is Real

This recent vote shows progress. It shows that more of the big money is finally starting to take the threat of climate change seriously. But that doesn’t mean Exxon will be invited to an Earth Day celebration anytime soon.

According to Bob Litterman, chairman of the risk committee at Kepos Capital LP, Exxon will have to comply with shareholder sentiment and report on the risk of oil- and gas-producing assets becoming uneconomical due to emissions restrictions.

He’s right, but does it matter?

Most people who invest in Exxon are probably unconcerned about the threat of climate change. Or if they are concerned, they’re not concerned enough to divest from Exxon and re-invest their capital into cleaner energy and transportation fuel companies.

And if you are an Exxon investor — or an investor in any oil and gas company — you should know that new emissions mandates are absolutely going to affect the bottom line. You don’t have to be a rocket scientist to figure that one out.

Business as Usual is No Longer an Option

Truth is, I really don’t care whether or not Exxon decides to share an honest risk assessment of its operations. It doesn’t matter. While Exxon is unlikely to go gently into that good night, it does generate revenue by selling a product that is at the earliest stages of decline.

You see, we know that the large-scale integration of electric vehicles, along with efficiency gains in internal combustion vehicles, is starting to have an impact on gasoline and diesel demand. In fact, according to analysts at Wood Mackenzie, global demand for gasoline is set to peak as early as 2021. And in the U.S.? Next year!

Demand for gasoline in the U.S. – the market which makes up one-tenth of the global oil consumption – is seen rising to some 9.45 million bpd this year and stay basically unchanged next year, before heading down to 9.28 million bpd in 2019.

Business as usual is no longer an option for Exxon. And while the folks who run the company are not stupid, I’ve seen no indication that they’re prepared to deal with the reality of peak gasoline demand.

That’s the ultimate threat — not regulations. So this recent proposal is a nice gesture but somewhat irrelevant. Unless, of course, you’re an environmentalist. In which case you’ll do a lot more for the planet by embracing and investing in cleaner energy solutions than demanding Exxon come clean on its carbon emission contributions.

And if environmentalism isn’t an issue for you and you’re just simply looking for a solid way to create a large amount of wealth in a short amount of time, you’ll be far better off investing in an industry that — unlike the oil and gas industry — is seeing a massive surge in demand.

Perhaps the most lucrative industry at the moment in terms of unprecedented demand is the legal cannabis industry.

If you’re a regular reader of these pages, you know I talk about this industry a lot. And how could I not? We’re making so much money in the legal cannabis space that it would be foolish to not talk about it.

On April 4, I recommended the stock to members of my premium service Green Chip Stocks. At the time it was trading at $0.23. Less than two months later, the stock hit a new high of $0.49. Check it out: 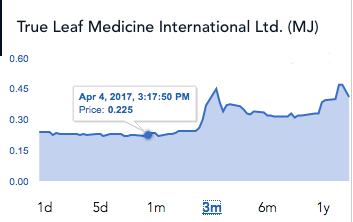 Folks, you’re simply not going to see that kind of action with a company like Exxon.

Understand, I don’t write these words to criticize Exxon. I’m merely writing them in an effort to point out that for investors, there are much better opportunities out there than giant oil and gas stocks.

I don’t know about you, but I don’t have time to waste on anything that’s not delivering triple-digit gains, not when there’s so much money to be made in the legal cannabis space.

And if you don’t believe me, just look at the numbers for yourself, which I’ve outlined in this legal cannabis research report.

Or check out this video, which explains why there is simply no industry more lucrative right now than the legal cannabis industry.

Even if you’re anti-cannabis, I know you’re not anti-money.

Don’t waste your time with a stock like Exxon when you could be pulling in triple-digit gains every couple of months from the legal cannabis industry.