It may sound obvious in a sea of red bear markets like we have in front of us today, but did you know even in a bull market, most investors lose money?

In fact, nearly 95% of all trades lose money or at best break even. Just take a look at this chart: 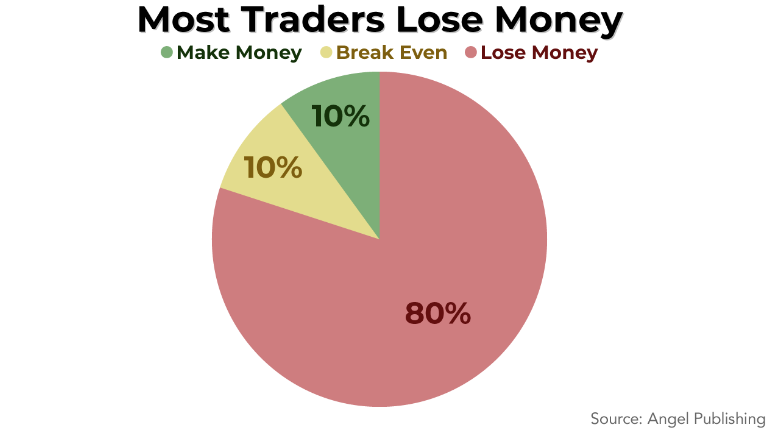 In my 10 years as a trader, I can say without a doubt the biggest reason folks lose money in the markets is they don’t exercise discipline and stick to a system.

These traders jump from one “big trend” to the next. They don't outline their trading goals, and even if they do, they don’t adhere to rules that will allow them to achieve these goals. They panic over headline noise, join sellers too late when that panic sets in, and then buy too high due to the fear of missing out (FOMO).

The other 10% that just break even, well, they have a system. Just not a system that works well. Every successful trader I know has a system — a system they stick with.

But not all systems are equal. And that’s what's happening with the 10% of traders who break even. They win, they lose, win again, lose again. It’s trading purgatory! And the main reason these systems aren’t working for these traders is because they’re way too complicated.

Making money in the markets can be extremely simple. As simple as playing a game of checkers, if I’m to be completely honest. If you’re using the K.I.NG. Me system, that is.

If you've been flailing around, chasing trade after trade and losing money, or are even lucky enough to be breaking even, I have something special for you: a simple yet extremely powerful trading system that you can actually follow!

Imagine a chess set and the board is the stock market. All the pieces are all the different systems, algorithms, and patterns that traders use.

Now, chess is a complicated game. And most traders — the 90% who lose money or only break even — think the stock market is this complicated, especially when trading options.

The chessboard has 64 squares — eight squares going one way and eight squares going the other way. Each side has eight pawns, two bishops, two knights, two rooks, one queen, and one king. Each piece can only move in certain directions, and due to this complicated nature, most folks are terrible at chess.

But these same folks could be checkers masters!

That’s the whole point behind my new trading system that is simply crushing the market right now. I’ve taken the complicated game of trading (chess) and boiled it down to a much simpler game for us to master (checkers).

That’s why I call it the K.I.N.G. Me system. And in 2022 alone, while the markets crash, this system has produced SIX triple-digit returns already! These include:

Now, I’m happy to show you all the details of this brand-new trading system. In fact, today, I’m holding a special event that I call “Your Best Trading Year Ever.”

The reason I’m calling this a special event is because this year is your year!

And this special event is your event!

Even though I’ll be your guide during the best trading year ever, none of this is really about what I’ve done. It’s about understanding that if I can do it, like the track record above proves I have, then you can do it too!

Because I believe in the power of the individual and I take this belief very seriously.

Because I watched my dad empower himself to take the opportunities in front of him when I was kid. Opportunities that helped my dad move from painting benches as a simple park employee in Beacon, New York, to becoming the Director of Security for North, South, and Central America at IBM. And retiring to a beautiful house on the beach down south!

Well, my journey is still far from over, but simply believing in myself and my ability to be a great trader has allowed me to go from flat broke with a crap bartending job to a cushy office where I have the pleasure and privilege to do something I truly enjoy: analyzing and advising my readers on the markets so they can write their own great success stories too!

And today, I’m going to show you how to do it.

All I ask is that you believe in yourself that you can do it, because despite all the headwinds, you could have your best trading year ever.

If you’re the kind of person who’s ready to recognize and seize incredible opportunities, here’s your invitation to join me for “Your Best Trading Year Ever.”