Where is the Oil Cycle?

I've been saying oil was headed for $33 a barrel for over a year now.

I've made some money in companies that benefit from falling oil prices, like Carnival Corporation (NYSE: CCL). And I'm making more as I write this by playing some airline call options. Jet fuel is a major cost for airlines, so cheaper fuel means more money for them.

Oil has been in a bear market since last summer. The price of oil is down 20% in the last month and a half and more than 60% since last June.

The pessimists are coming out of the woodwork.

Morgan Stanley is reporting, “There’s a chance that the downturn in the global oil industry may be more severe than in 1986, when business endured the deepest slump in 45 years,” according to Bloomberg.

Dennis Gartman says he sees the "makings of a protracted bear market.”

On the flip side, Credit Suisse says, “Stocks of U.S. oil and gas companies have been so battered as commodity prices have fallen that it looks like there is finally an attractive entry point.”

The drop in price has to do with the strong dollar, oversupply by the U.S., the Saudis, and Russia, and a possibility of new oil being dumped by Iran. Add to this a slowdown in China, and you could see my $33 forecast pan out.

The International Energy Administration (IEA) is predicting that global oil demand growth is forecast to slow to 1.2 million barrels per day (mbpd) in 2016 from an average 1.4 mbpd this year.

World oil demand growth appears to have peaked in the first quarter at 1.8 mbpd and will continue to ease throughout the rest of 2015 and into 2016 as temporary support fades.

Meanwhile, global oil supply climbed by 550,000 barrels per day in June on higher output from both OPEC and non-OPEC producers. At 96.6 mbpd, world oil production was an impressive 3.1 mbpd higher than a year earlier.

Demand is Up in the U.S.

This should be a dominant trend over the next few years. New cars and trucks are selling in the U.S. due to the average age of old cars, the high expense of used cars, and the fact that sub-prime loans are still allowed in car loans.

If you can't buy a house, at least you can look for good parking in your apartment complex.

The oil cycle is like all business cycles/commodity cycles, only more so. In your typical cycle, cheap oil shuts down supply, as small firms go under when they can't produce at a profit.

Then it starts again...

That's how they write it up in the textbooks. But as you can tell, the price of oil is more heavily influenced by world events, declining oil fields, and financial crises: 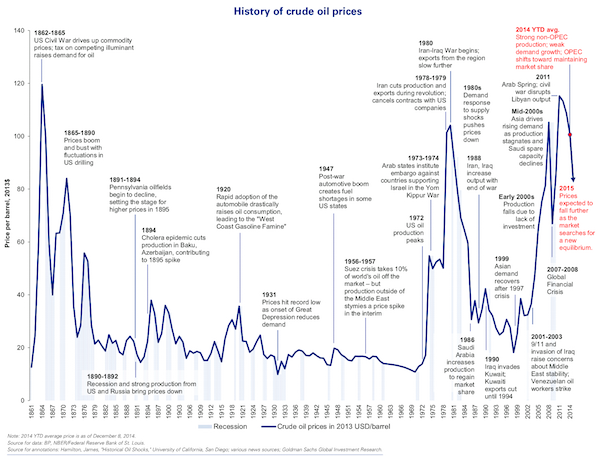 If Morgan Stanley is right and we are heading back to 1986, you will see 14 years of low oil prices.

This not only coincided with the greatest bull market in equities of all time... but it was also the time of baby boomer household formation and sweeping technological changes, including the PC and the Internet.