NFL player Drew Brees was in trouble with the internet recently for wearing a T-shirt that said “Say Her Name.”

There has been an ongoing "Say Her Name" movement since Breonna Taylor, an unarmed Black woman, was shot by police and killed.

However, the internet mob assumed Brees was tying the movement to the white Trump supporter Ashli Babbitt, who was killed during the riot at the Capitol building. The Twittersphere is angry that the two women — both unarmed and killed by cops — could be compared or were in any way alike.

Brees genuflected and deleted the tweet, kowtowing in yet another example of the power of the internet.

For me, the striking thing about so many of these images of rioters in the Capitol is that what they're doing — all of them — is creating content for social media.

At least in their minds, the true seat of power is not actually in that building. It's online. 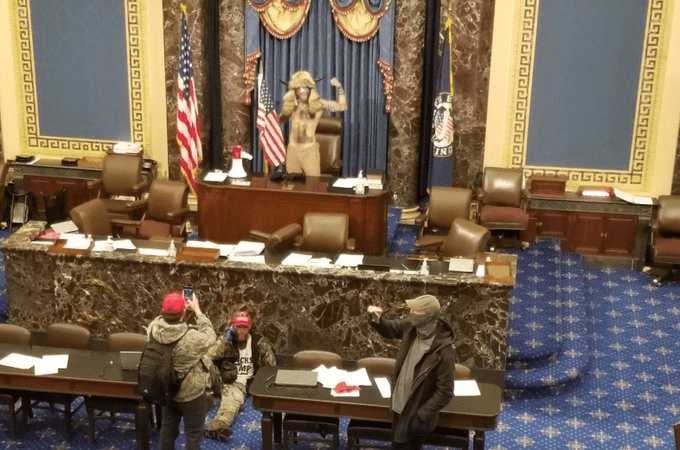 The power is not at the Capitol building — it's on the internet.

All of this, of course, pushes the outrage meter to 11. But what is going on here? It’s not really about these two people shot by the police. Or even the “insurrection.” What is going on is much bigger than the petty politics of the moment.

We are seeing the mass destruction of all our basic institutions that previously held this country together.

And it's not just a United States thing. This phenomenon has been going on around the world for at least five years. Think umbrella protests in Hong Kong, the Yellow Vests in France, the bus riots in Chile, and on and on...

Basic institutions that have built trust over hundreds of years are under siege. The concepts that used to be trusted are now second-guessed at every opportunity — the rule of law, the courts, Congress, the presidency, universities, voting, Wall Street, unions, housing, trade, international treaties, the military, books, TV news, newspapers, political parties, law enforcement, the FBI, CIA, ICE, EPA, BLM, NFL… Name it and it is embroiled in some controversy.

The Public Is Revolting

In 2014, Martin Gurri, a former CIA world analyst, wrote a book called The Revolt of the Public and the Crisis of Authority. In it, he has a couple big ideas that explain what is going on in the world.

His first big idea is that information, which used to be held as a monopoly by leaders, is now in the public sphere. This is like the Church losing its monopoly on the Bible after the printing press. Once people could interpret their own truth, there was chaos, destruction, and war.

In an interview about his book, Gurri said:

Well, I mean everything has parallels in history. I get thrown a lot, “Well, what about 1968? The late ’60s were kind of like this.” I myself think a better parallel is probably 1848 where the whole of Europe erupted in revolution. You can make a case that even when you talk about information, the printing press was a far more revolutionary change than the internet, at least so far. I have a friend who makes the following historical analysis. He says if you had gone to the 30 Years' War where people… I mean it was a horrible war. Millions died. The population of Germany took several generations to replenish itself, and they were all killing each other over religion, and all the religious hostilities had to do with these books that were being published, each of which had like five different words they were fighting over, right? If you had gone to the 30 Years' War and asked people, “Well, what do you think of the printing press?” they would have said, “That’s the most horrible conflict-inducing technology that has ever been invented. Take it away.”

His second big idea is that of the shattered mirror reflecting shards of reality.

In the book itself, he writes:

The mirror in which we used to find ourselves faithfully reflected in the world has shattered. The great narratives are fracturing into shards. What passes for authority is devolving to the political war-band and the online mob — that is, to the shock troops of populism, left and right. Deprived of a legitimate authority to interpret events and settle factual disputes, we fly apart from each other — or rather, we flee into our own heads, into a subjectivized existence. We assume ornate and exotic identities, and bear them in the manner of those enormous wigs once worn at Versailles. Here, I believe, is the source of that feeling of unreality or post-truth so prevalent today. Having lost faith in authority, the public has migrated to the broken pieces of the old narratives and explanations: shards of reality that deny the truth of all the others and often find them incomprehensible.

This is why you get the horned guy taking selfies on the House Speaker's dais. He dresses in furs as a reaction to some dark corner of the internet that declares that people who settled the Old West — prospectors, trappers, and pioneers — were not heroes but evil.

Former President Obama recently said that the internet poses the biggest threat to democracy today, that it has taken the place Nazis and communists occupied in the last century…

This is what he was talking about. People see how the sausage is getting made and they don’t like it. They then talk to people who don’t like it in the same way and get jacked up on righteous indignation.

“Something must be done!” they shout. “Someone must pay!”

All parties are convinced they are correct. They’ve done their Google research, whose algorithms hand them what they are looking for, and that is all the proof they need.

Historically, the United States has had a fantastic ability to come together in times of crisis. On September 12, 2001, the Stars and Stripes showed up on porches across the country.

When President George Bush stood at ground zero and said, “I can hear you. The rest of the world hears you. And the people who knocked these buildings down will hear all of us soon,” his approval rating jumped to 90%.

It is hard to believe that could happen today. The flag is controversial, the national anthem is racist, the statues of our Founding Fathers have been literally torn down from their pedestals. There are no national symbols to replace them.

Our leadership is divided, corrupt, and bent on vengeance. Today’s editorial in The Wall Street Journal called for Biden to push back against another Trump impeachment and move the country forward toward reconciliation — to start fresh with his agenda and let Trump fade out of the news.

Ninety-nine comments out of 100 said they were canceling their subscription, Trump must pay, or something along those lines.

In their book Why Nations Fail: The Origins of Power, Prosperity, and Poverty, first published in 2012, Daron Acemoglu and James Robinson provide over 100 case studies of why societies fail. Their conclusion is that nations end when trust in institutions dissolves.