Mission Advancement Corp. (NYSE: MACC), the blank check company that billed itself as a purpose-built investment company seeking to partner with a world class consumer business with the aim of creating meaningful financial, social and cultural value, is being delisted because it couldn’t get a deal done within the allotted time specified by the SEC.

The interesting thing about this is that the company did have a deal in the works last year, but it fell apart of Colin Kaepernick, one of its sponsors, and of course a huge celebrity name, would not promote the deal MACC was working on - which was a merger with The Change Company, which provides lending to minority borrowers that are typically ignored by traditional banks.

A lot of investors blame Kaepernick for the demise of MACC, but it’s all a bit suspect.  After all, had Kapernick agreed, he would’ve made a lot of money. Why would he make a move that would cost him millions?

Based on the fact that the man also chose social justice activism over keeping his mouth shut so he could make tens of millions of dollars in the NFL, I suspect the reported merger didn’t meet Kaepernick’s standards.

In other words, I’m willing to bet that the folks running MACC weren’t probably as “social justice” oriented as they claimed.

Or maybe I’m wrong.  Maybe it was just a matter of Kaepernick not wanting to be showboated around. After all, the guy is definitely under a media microscope.

But the more I thought about it, the more I questioned what MACC’s plan was all along.

After all, it’s not difficult to find companies that would’ve met MACC’s social and cultural mandate.

I don’t have nearly the same connections as those Wall Street hot shots, and I discover new companies that fit this bill at least once a week.  And while most aren’t worth much, there are certainly enough that could’ve proved quite profitable for MACC.  I’ve certainly profited from such companies myself in my more than 20 years in this business.

Regardless, what’s really unfortunate about this, is that detractors of ethical investing are going to latch onto this to bolster their argument that one cannot make money while considering social, cultural and environmental standards.

Of course, this is untrue.

In fact, Amalgamated Bank (NASDAQ: AMAL), a company that could easily be described as an ethical investment, has more than doubled over the past two years. 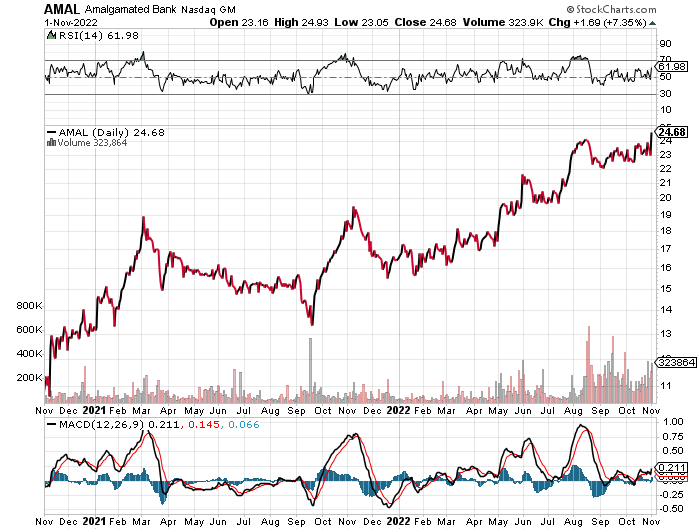 I still don’t know what the hell “woke” is supposed to mean, by the way.  I suspect it depends on who you ask.

But typically, it tends to have a lot to do with embracing ideologies that support social justice and environmental sustainability.   Which is exactly the kind of thing Amalgamated Bank focuses on.

Amalgamated Bank describes itself as a bank for people who care what their money does in the world.

When you deposit your money at Amalgamated, it supports sustainable organizations, progressive causes, and social justice. We are committed to environmental and social responsibility. We're net-zero and powered by 100% renewable energy, and we have a long, proud history of providing affordable access to the banking system, supporting immigrants and affordable housing, and being a champion of workers' rights.

Of course, it’s important to understand that just because Amalgamated Bank embraces causes that tend to be aligned with progressive ideologies, it’s also not a charity.  Amalgamated has actually delivered for shareholders because it’s been successful at combining its support for environmental and social causes in a fiscally thoughtful and responsible manner.  But there are plenty of other “ethical” companies that are being run by folks who just don’t have that skill set. Or worse yet, are simply looking to “green wash” the public, claiming to care about social and environmental causes, but instead just looking to bilk gullible treehuggers.

It’s unfortunate, actually.  But it’s also a reality that socially-responsible investors must be aware of.

Truth is, I’ve been operating as a socially-responsible investor for more than two decades now, and I would say that at least 90% of the “ethical” investment opportunities that come across my desk are either garbage or scams.

But when you can lock into that other 10%, well, it just feels great to know that you’re doing well, by doing good.  Making money while making the world a better place shouldn’t be criticized or vilified.  It should be celebrated.