What the Crow Knows About Investing

This is Corvus brachyrhynchos — better known to you and me as the American crow. 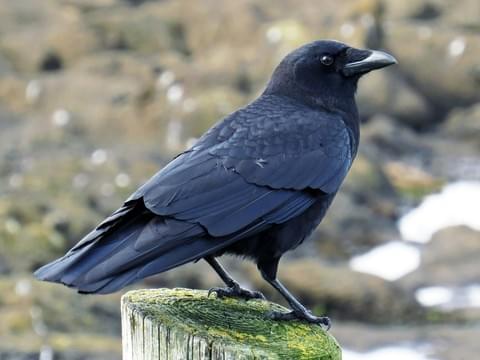 To most people, crows are nuisance birds. They're loud, squawking pests that tear open residential trash bags left on the curb for pick-up. And when they're not making a mess of your curb, they're out in farmers' fields eating their crops — hence the scarecrow.

But the crow is very special among birds.

In fact, they're one of the most intelligent animals on the planet.

National Geographic reports that the cognitive abilities of crows rival chimpanzees and gorillas. Studies have shown that crows have the cognitive problem-solving skills of a seven-year-old human. They are the only animal other than primates that use tools.

Not only can they use tools, but some crow species can make tools.

Crows can solve multi-step problems to achieve their goal, such as getting a piece of food. In one test, a crow completed an eight-step puzzle to receive a food reward.

Crows also have an extremely good memory. Tests have shown crows can recognize and remember individual human faces, particularly those they associate with danger, like a farmer with a shotgun.

The crow has even been shown to exhibit what's called “theory of mind.” This is the ability to acknowledge that other beings are self-aware and that they have desires or intentions. A crow will not bury its food if the bird knows you're watching it.

But perhaps the most impressive thing about crows is why they bury food: They're investing.

Yes, the crow is even a wise and active investor.

Crows know that if they bury a piece of meat, over time it will attract flies. Those flies will lay eggs. And in a few days, there will be maggots — fresh, juicy, delicious maggots.

So when the crow goes back to retrieve the bounty, it gets the original meat it already had and has doubled the meal with the maggots. It gets the principal plus interest!

The crow is a part-time investor whose operation, upon thorough analysis, seeks safety of principal and an adequate return. Benjamin Graham would be proud.

The crow will continue being a nuisance bird to you. But it's the crow's intelligence that makes it a worthy opponent.

And we should take note what our little opponent is doing right: He's investing wisely.

Crows are pretty threatening birds. Anyone who's seen the 1963 Alfred Hitchcock classic The Birds can attest to that.

A group of crows is even called a “murder.” Seems like they could take some extreme risks. But they don't. They invest safely in the right places looking for a decent return. And they get it.

It's a lesson of nature we should understand: Invest wisely.

P.S. There's one specific market we think is the wisest right now: 5G. And that's simply because 5G isn't really something anyone is going to be able to choose. Sooner or later, 5G will be the standard, replacing all previous technology like the computer replaced the typewriter. Chris DeHaemer has found a small group of companies that control a major share of the infrastructure space that 5G networks are going to need. He says these companies control some 80% of the space major cell carriers like AT&T, Verizon, Sprint, T-Mobile, and others are clamoring to get their hands on. DeHaemer says, “It's like they have a monopoly on the hottest real estate of the 5G future.” Check out a recent report DeHaemer published on this opportunity here.

World's Greatest Hedge Fund Manager
Ray Dalio is billed as the world's greatest hedge fund manager. But his newest book fails to offer anything of real value. Energy and Capital editor Christian DeHaemer recommends several books that are much more beneficial to the individual investor...
How to Get Rich Despite the Fed
The best way to make money is to have your money work for you rather than working for your money. Energy and Capital editor Christian DeHaemer gives you some tools to fight back against the uber-elites.
The Best Energy Explorer Does it Again
Back in the day, if a little-known international oil company hit a 100 million barrel mother lode, the stock would double on the news. Yesterday, Tullow Oil (LSE: TLW) did just that. Energy and Capital editor Christian DeHaemer discusses whether the stock is a buy.
Hydrogen Fuel Cells: The Downfall of Tesla?
Lithium has been the front-runner in the battery technology market for years, but that is all coming to an end. Elon Musk is against them, but Jeff Bezos is investing heavily in them. Hydrogen Fuel Cells will turn the battery market upside down and we've discovered the tiny company that is going to make it happen.