An Energy Playbook for Team USA

If you've ever seen little kids play soccer, you know how comical it is to watch. The whole teams (except the goalies, who are usually bored and distracted by interesting bugs at their feet), chase the ball around en masse as the ball is more herded than played. Goals are the outcome of a chaotic knot of players kicking as rapidly as possible, not the skillful execution of premeditated strategy. 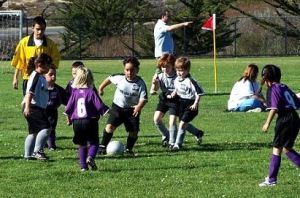 As players mature, they learn to play their positions and go where the ball will be, not where it is. They pass it around, executing well-rehearsed plays and setting up their shooters for scoring opportunities. Rarely do you see more than two or three people actually chasing the ball.

In short, they learn that teamwork is more important that personal performance if you want to score goals.

To be precise, we don't have one. There is no playbook. We are simply hurtling at high speed toward the net energy cliff.

When Team Right has the ball, it furiously kicks it toward the fossil fuel and nuclear goal. Restrictive regulations are dismantled. New drilling leases are awarded. Piles of federal cash are shoveled to their preferred recipients. Investment in renewables and environmental protection is slashed. Wars for oil are started.

Then Team Left gets control, furiously herding the ball toward the green goal line. Incentives are awarded for wind and solar. Piles of federal cash are shoveled toward the renewable manufacturers. Taxes on fossil fuel producers are raised and their incentives are slashed.

Most of the American public lounges listlessly in the goal nets, distracted by scandals and the technological salvation du jour — the hydrogen economy, undiscovered oil bonanzas right beneath our feet, space based solar power, biofuels from algae and other overhyped phenomena.

And so it goes. Energy policy lurches around aimlessly in the middle of the field. Little progress is made.

On the rare occasion that the ball does make it toward a goal, a violent and senseless group thrashing ensues at the goal line. The ball ends up out of bounds more than it does in the net.

Incentives come and go, creating boom-and-bust cycles that prove devastating to progress and innovation for both the Brown and Green energy sectors. Wild price swings result. Nobody understands what's causing it.

Fouls are called that might have been overlooked had the play been orderly. Oil speculators are scapegoated. Climate scientists are vilified.

The commentators on the sidelines excitedly report every kick, block, shove, and stumble. They don't realize they're watching a pee wee league game, so they take it very seriously. The lack of coherent strategy never even crosses their minds.

We learn nothing from the game, and do nothing differently afterward. Trading rules may be slightly modified, and climate legislation may be rendered toothless or simply stall out, but nothing really changes.

We simply bunch up again, resuming our aimless herding.

It's fair to say that hardly anyone in America is energy literate. They couldn't tell you what a kilowatt-hour is, where the power in their sockets comes from, how much oil the country consumes, or where it came from.

Energy simply isn't taught until the college years, and even then only to engineers who specialize in it. Few bother to learn anything about it on their own time in their adult years. This is as true for elected officials as it is for the rank-and-file.

Only a tiny cohort have begun to seriously contemplate the challenges of energy transition.

Since we don't really know the game, we fall back on our prewired "tribal" behaviors.

Team Right tunes in to Rush Limbaugh and Fox News and learns its talking points: Drill here, drill now, pay less! Nuclear power could save us in 20 years if we'd only build some reactors! Environmentalists and liberals who want to destroy America are responsible for our energy problems!

Team Left tunes into Al Gore and MSNBC and bones up on its talking points: The oil companies are evil and we should stop drilling now! Renewables could end global warming in 20 years if we'd only build them now! The fossil fuel industry and its Texan cronies are responsible for our energy problems!

Then they come together at social gatherings and Town Hell meetings. They bunch in their respective corners, lobbing their talking points like grenades. They thrash about frenetically. Then somebody says something out of bounds and the play pauses.

Nothing is learned by either team because they have nothing to teach. You can't have a rational exchange of information and find agreement on complex issues when you don't actually understand what you're talking about.

But you can always represent your tribe.

You don't need to know the complex reality of nuclear power or understand that its future has a dozen or so hard, real-world limits. You don't need to know that renewables are still less than 2% of the world primary energy supply and can only grow so quickly even if you tilt everything in its favor, particularly if you're trying to build them after oil has peaked.

You don't need to have the first clue about the insane complexity of climate science, or the validity of its models.

No independent thought or literacy is required of you. If somebody from your team claims we can innovate our way to zero carbon in 40 years because Moore's Law says so, or that peak oil is bunk and the Invisible Hand will save us because economic theory says so, then that should be good enough for you.

It doesn't matter if he's been wrong about oil for the last five years straight, or if he has no particular expertise in the solutions he champions. If he's on teevee all the time and he's got a book, or he's worth a couple billion dollars, he must be an authority, right?

Simply give the ball a good kick for your side, and your job is done.

A Playbook for Team America

It's time for us to grow up and learn to play this game for real.

We need to gather in the locker room to watch some films of older, more mature players and try to copy their moves.

We'd take note of China's long-term rail construction plan, instead of arguing that an abortion like Amtrak doesn't pay for itself right this minute.

We'd plan to manage our resources for the long term health of our society, like Norway and Saudi Arabia do.

We might form an Industry Taskforce on Peak Oil and Energy Security like the UK has, to advise and prepare industry and policymakers for the decline of oil, instead of writing sunny official reports that completely fail to recognize reality.

We'd copy the proven successes of long-lived, stable feed-in tariffs in Germany and Japan instead of inventing complex, corruptible mechanisms like cap and trade.

We'd formulate and then execute 20- and 30-year plans to reduce our need for fossil fuels, instead of watching incentives come and go with every turnover of a Congressional seat.

Our playbook would begin with some rough milestones:

Then we might draw up some plays, and practice them.

We'd invent a defensive strategy for our grid. We'd build in micro-islanding and distributed storage capacity so that single points of failure don't cascade into widespread blackouts. We'd harden it against cyber-attacks.

We'd recognize the extreme vulnerability of importing nearly three-quarters of our daily oil supply, at a cost of around $500 billion a year. We'd understand that the knife edge is peak exports, not peak oil, and plan out a defense in case the exports from our top sources go to zero.

Most importantly, we'd learn teamwork and good sportsmanship. The Greens, the Browns, the Department of Energy, Congress and all the states would work together to score a win for Team America.

Or we can stay in the pee wee league while the smart teams go on to play for the resource championship of the world.

In the end, we will deserve the energy future we get.

Investor's Note: While there are several bridges that we'll need to develop in order to transition from our oil-driven society, there's only one clear-cut winner: Natural gas.

In fact, natural gas is going to play a critical role in meeting our future energy needs; it's a clean, domestic resource... and we have a lot of it.

For investors, the game gets even better! Thanks to modern advances in drilling and fracturing techniques, companies can now tap into the vast shale gas fields. One of those formations in particular is out-pacing them all. In this free bonus report, you can learn everything you need to know about this massive shale play — including four companies raking in the profits for members of the $20 Trillion Report. Simply click here to learn more about this opportunity.