What If Green Energy Fails?

An recent opinion piece published in the Wall Street Journal asks us, “What if Green Energy Isn’t the Future?”

A week doesn't pass without a mayor, governor or policy maker joining the headlong rush to pledge or demand a green energy future... Hydrocarbons may be the source of 80% of America's and the world's energy, but to say they are currently out of favor is a dramatic understatement... What happens if renewables fail to deliver?

What if green energy fails?

The rapid increase in states and cities announcing renewable energy goals is something we've recently talked about here in Energy and Capital.

No doubt, many American localities have committed to renewables or made some other climate change goal. And many of those energy goals are, at least a bit, overly ambitious.

Probably... at least for the most part.

Let's just consider the renewable energy goals in my home state of Maryland.

Critics have already noted that the bill doesn't do much to fight climate change or translate into more Maryland jobs. Moreover, they've complained it still recognizes nuclear energy as a renewable fuel source.

The 2004 legislation was originally written to include nuclear energy as a recognized renewable fuel source. And Maryland does, in fact, produce and consume a significant amount of electricity generated by nuclear power.

The majority source of Maryland's energy consumption is, unsurprisingly, gasoline. That's followed up by natural gas, nuclear, and coal, respectively. 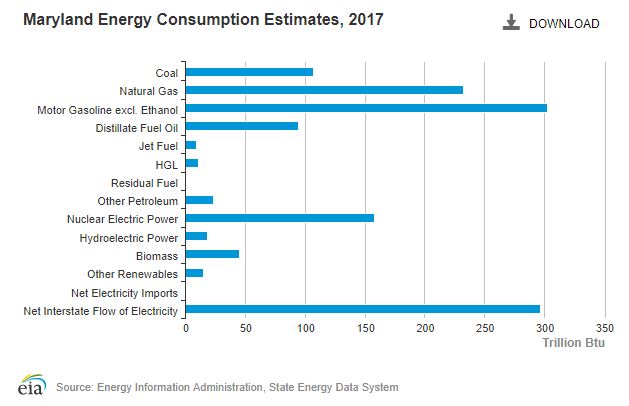 Hogan's new bill does require the state to study whether subsidies should be given to nuclear power generation.

But it's still highly debatable whether or not nuclear power is a renewable or clean energy source in the first place. So even if the state can increase its consumption of renewable energies by expanding its nuclear capacity, it will likely still be condemned as a failure by climate change and environmental critics.

As you can see, only a small fraction of the state's energy consumption is currently sourced by renewables like solar, wind, hydro, geothermal, and biomass.

For Maryland to meet its 50% renewable energy goal without nuclear by 2030, it would need to make massive investments to attract investors to develop the industry further. That would mean hundreds of millions in tax dollars needed to build infrastructure for transportation and distribution and piles of legislation to get it all done amid a change in the state's leadership (Hogan's term limit is up in 2022).

All that is very unlikely.

So I agree with Mills; achieving all the renewable energy goals set out by American cities and states is likely too expensive and politically roadblocked to be considered successes by everyone. And most of these plans, if not all, will inevitably fail without moving the goal posts.

The green energy industry is already a success.

The International Renewable Energy Agency recently reported in the sixth edition of its Renewable Energy and Jobs series that 11 million people were employed by the renewable energy sector in 2018 — that's an increase of 7% over the previous year.

According to recent data from Deloitte, electricity generation from utility-scale wind and solar capacity topped 8% last year compared to 7% in 2017. Deloitte reports:

In 2018, the US renewable energy sector remained remarkably resilient, gaining ground despite uncertainty about the effects of federal tax reform legislation and a spate of new import tariffs.

We see the fundamental drivers of this growth poised to continue in 2019, but we also see three trends coming into sharper focus that are likely to shape renewable growth in the coming year. Those trends include emerging policies that support renewable growth, expanding investor interest in the sector, and advancing technologies that boost wind and solar energy’s value to the grid, asset owners, and customers.

There's no doubt that there has been a lot of hype pumped in and out of the green energy industry. Most of the hype was probably undeserved. But some of it was legit. The data shows the industry growing at a great clip over the long term. 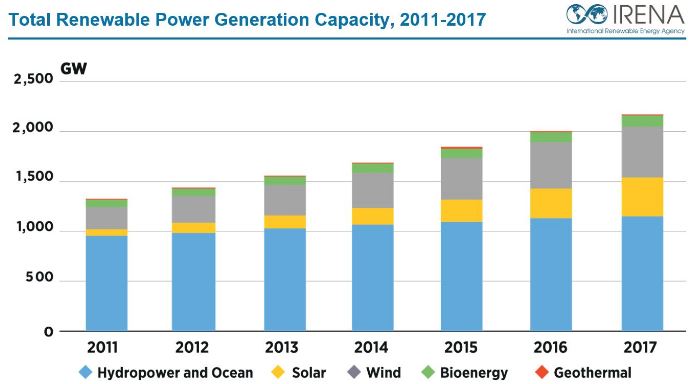 The green energy industry is still the future, even if overly ambitious state and local renewable energy and change goals will ultimately fail.

But take note: Green energy is the future.

What they do show, however, is solid growth in both renewable and traditional fossil fuel use over the next several decades.

For us as investors, that means we really don't have to decide between the two. There are still great opportunities in both renewables and traditional fossil fuels that will continue to present themselves as time passes.

Renewable energy and traditional fossil fuels have been claimed by opposing political ideologies. But don't let those ideologies get in the way of your profit.

The overly ambitious promises that sound too good to be true probably won't be fulfilled. But green energy is still the future. And the industry is growing at such a rapid clip that not participating in the rally is leaving money on the table.

What if green energy fails?

Here's a link to Mills' opinion piece in the Wall Street Journal.