We Could Be Running on Hydrogen Fuel Cells, But...

It's harder to get than you'd expect.

Last week, we took a look at why hydrogen fuel cells are lagging behind lithium batteries in the EV industry.

There was one point in particular, however, that caught the eye of a few of our readers:

First and foremost, the batteries do not store energy — they store pressurized hydrogen gas, which is used to produce energy on the spot.

Which prompted the extremely fair question... why not just use hydrogen for energy?

After all, if fuel cells are faster to refuel, more energy efficient, and 100% clean compared to today’s most popular battery type, why not just scale them up?

Can Hydrogen Be Used for Energy?

Before we answer this question, let’s take a look at how these batteries work.

Here’s a simple diagram to illustrate: 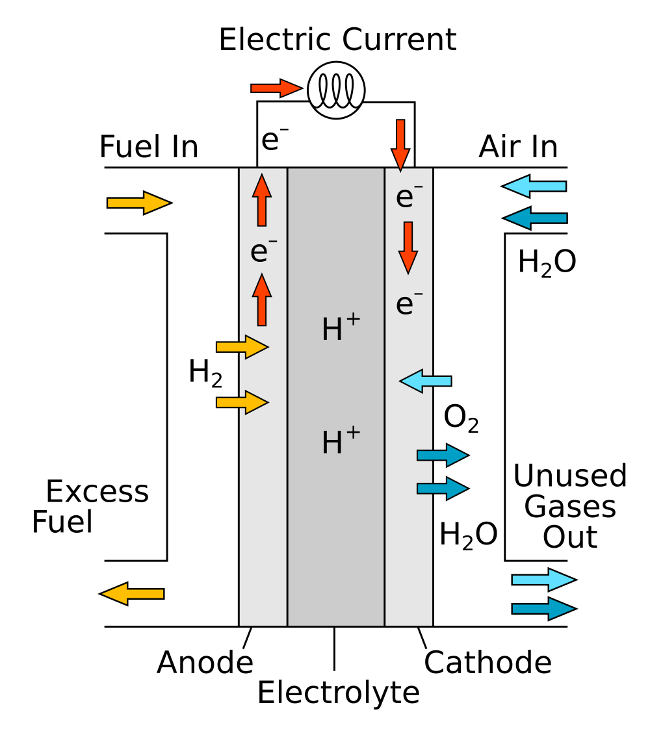 Several chemical processes take place inside the fuel cell that produce the energy.

First, pure hydrogen is fed into the cell and broken into singular hydrogen atoms, which are positive, and electrons, which are the negative atoms we use for energy.

On the other side of the circuit, the hydrogen atoms are mixed with oxygen and reform into water.

What this means for hydrogen fuel cells as an energy source is:

Though you’d be surprised at just how many things do, in fact, run on hydrogen fuel cells today.

According to the Department of Energy, despite the popularity of lithium in EVs, there were about 350 fuel cell vehicles on U.S. roads in 2016. Barely a drop in the bucket, for sure, but proof positive that it can be done.

Less noticeable but no less impressive were the more than 11,000 fuel cell–powered industrial vehicles, such as forklifts for warehouses, being used in 26 states.

Hydrogen fuel cells are getting even more use in stationary operations.

As of 2016, the DOE reported that the country had more than 235 megawatts of large-scale fuel cells in use as power plants.

Predictably, clean energy powerhouse California has the majority of these installations. Connecticut and Delaware have the largest single installations: 14.9 MW and 30 MW, respectively.

Where they’re not used as power plants, hydrogen fuel cells can be found in more than 40 states as off-grid backup energy providers.

You can even buy a personal-sized fuel cell as a backup generator online!

With all this in mind, even the clean energy skeptics out there must be wondering why we’re not running on hydrogen energy yet.

Hydrogen is the most abundant element in our universe. And while it’s only about 13% of the Earth, that still an impressively large amount.

The problem comes down to the kind of hydrogen we can use.

Much like lithium, hydrogen has to be purified to a certain degree before it can function correctly in a fuel cell.

And that, dear readers, is the problem.

Not only is it difficult — and expensive — to purify hydrogen to that degree, but the gas is notoriously difficult to handle once it’s been cleaned.

Transporting and storing it without contaminating the gas again becomes an issue.

It’s why lithium, which is volatile but can be purified relatively easily, has taken the energy world by storm, while hydrogen sits on the sidelines.

It’s also why hydrogen fueling stations are extremely rare; there are only 40 in the entire United States.

Yet the potential for hydrogen in the energy industry is just too high to ignore!

Investors in the energy space ought to be paying close attention.

Amazon has invested in fuel cells for motive operations.

This is not an industry that will be fading back into the background. In fact, it will be doing exactly the opposite as the push for cleaner energy alternatives continues.

We’ll be taking a closer look at the ever-growing potential in hydrogen fuel cells in the coming weeks.

Keep an eye out for these updates to hit your inbox soon!