This could be your last shot to secure a near-bottom investment position in the next big water bull market.

And that's because even though we've long known of the frightening conditions, after years of bureaucratic delays, governments around the world have just started to allocate the money that will be spent on improving their water infrastructure.

Globally, we're talking about hundreds of billions of dollars that will need to be spent.

And if we play our cards right, we can make a killing just by taking a microscopic piece of that.

Two weeks ago, the White House announced its 2017 federal budget proposal. It included nearly $280 million to protect and increase the nation's water supply through investment in water technology.

Then the Canadian government announced that it was planning on spending nearly $12 billion on its infrastructure over the next two years.

With the money finally starting to become available, the time to enter water infrastructure has never been better.

I wrote to you last week about Xylem (NYSE: XYL) — my “picks and shovels” play of the water industry.

I thought share prices were a little high at the time. But if you bought shares, even just a week ago, you'd already be sitting on a small gain.

As a long-term water investment, I really like Xylem. But if you're looking for a short- to mid-term play with a water angle, I've got an interesting idea for you... 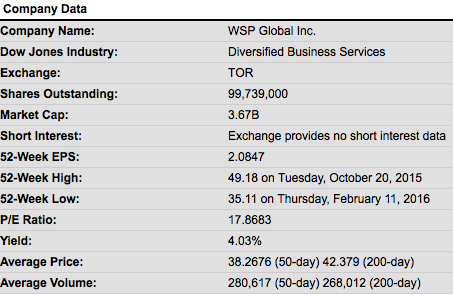 WSP Global is a major engineering consulting firm. The company provides technical and strategic consulting to a number of sectors including real estate, municipal infrastructure, environment, industrial, and natural resources.

A consulting company as a water play?

That's right. And that's because consulting is going to be one of the first industries to benefit from the global water crisis.

In the 2017 U.S. budget proposal, more than half of the proposed $280 million water infrastructure spending is slated for various consulting and research projects.

And that makes a lot of sense because organizations like the EPA estimate that the U.S. will have to spend $600 billion to improve its water infrastructure over the next 20 years alone!

Would anyone disagree that the government should bring in an independent consultant before allocating all that money?

So yes, a consulting company as a water play.

And not just any consulting company. WSP is one of the world’s leading water resource engineering firms, providing services to customers throughout the entire water cycle — from ground to glass.

Now, here's where things get interesting...

As I just mentioned, the Canadian government announced it would spend nearly $12 billion on infrastructure over the next two years. Over $5 billion of that is already slated to be invested in the country's water infrastructure.

Now, I was unable to find any information on exactly how that $5 billion was going to be spent. But if we use Obama's 2017 proposal water investment as a measure of how that money will be allocated, we can assume that a significant portion of the Canadian funding will go to consulting and research projects as well.

And WSP is in a perfect position to take a piece of that spending. Because not only is it one of the leading water resource engineering firms in the world, but it's headquartered in Montreal. I would assume that the Canadian government would prefer to contract with Canadian firms — if only to make things easier.

And here's where things get a little more interesting...

The Canada Pension Plan — which is very similar to Social Security in the U.S. — just purchased almost $14 million worth of WSP in the open market.

Now, the Canada Pension Plan manages about $300 billion in assets. So $14 million is nickels and dimes to the CPP.

But it is interesting to see a government program (the CPP) investing in a company (WSP) that has good potential to get government money.

It also seems clear that WSP is ramping up its focus on water. A search of the term “water” in the job listings section on WSP's website returns 90 openings.

To compare, a search of the term “water” in the job listings section of Deloitte's website returns only 45 openings. Deloitte is the largest consulting firm in the world — about six times larger than WSP by revenue.

As a short- to mid-term play, WSP seems to be in a good position to take advantage of Canada's water infrastructure funding. However, I wouldn't expect to retire from the gains of this stock.

And that's simply because this is not a company that I can image a lot of people getting excited about and driving up share prices. But if WSP does secure consulting contracts as part of Canada's $5 billion water infrastructure plan, I think we could easily see a 10% to 20% gain. And I see only very limited downside risk.

The company's financials are quite strong overall, with an adjusted EBITDA of $442 million in 2015, up 74% over the previous year. WSP has a tight share structure for a +$3 billion company, with less than 100 million shares. The stock is even paying a 4% dividend right now (although ex-dividend day was yesterday for WSP).

Of course, you should always do your own due diligence. Here's a link to the company's website. But I like WSP as a short- to mid-term play on Canada's water infrastructure spending.

Keep reading Energy and Capital for more water-related investment ideas. Keith, Chris, and I have been digging through dozens of new water ideas. We'll have more for you in the coming weeks.