Warren Buffett Has $15 Billion in THIS Energy Play

That's what the folks over at Bloomberg Business have suggested. But nothing could be further from the truth. After all, Buffett's making a fortune in the alternative energy space.

Yet here's what was reported in Bloomberg this week:

Warren Buffett highlights how his Berkshire Hathaway Inc. utilities make massive investments in renewable energy. Meanwhile, in Nevada, the company is fighting a plan that would encourage more residents to use green power.

Berkshire’s NV Energy, the state’s dominant utility, opposes the proposal to increase a cap on the amount of energy that can be generated with solar panels by residents who sell power back to the grid in a practice known as net metering.

While the billionaire’s famed holding company has reaped tax credits from investing in wind farms and solar arrays, net metering is often seen by utilities as a threat. Buffett wants his managers to protect competitive advantages, said Jeff Matthews, an investor and author of books about Berkshire.

“It always comes down to money,” he said.

Of course it always comes down to money!

You think you'd see billion-dollar growth in the solar space if it were only being facilitated by overzealous tree-huggers and wealthy eccentrics?

The rapid growth in renewables — particularly in solar and wind — is the result of entrepreneurship, capitalism, and the basic fundamentals of supply and demand.

Anyone who honestly believes there's no money to be made in the renewable energy space should go find a typewriter company to invest in. I've been screaming this from the rooftops for a decade now, and many of those who have listened — and invested accordingly — have made small fortunes.

Look, Buffett doesn't really have much skin in the residential solar space. Most of his renewable energy scratch comes from utility-scale development. So having to shell out more to individual homeowners who send solar-generated electrons to the grid isn't going to help Berkshire's NV Energy.

Of course, this actually illustrates a pretty interesting point.

When you step back and look at the big picture of renewable energy, it's really only the super wealthy that can even afford investing in these giant utility-scale renewable energy projects. And these deals are not for the risk-averse.

You can, however, invest in the public companies that build or invest in these projects. I'm talking about companies like First Solar (NASDAQ: FSLR) and SunPower (NASDAQ: SPWR), not to mention the financiers and developers.

Some of my favorites here include: 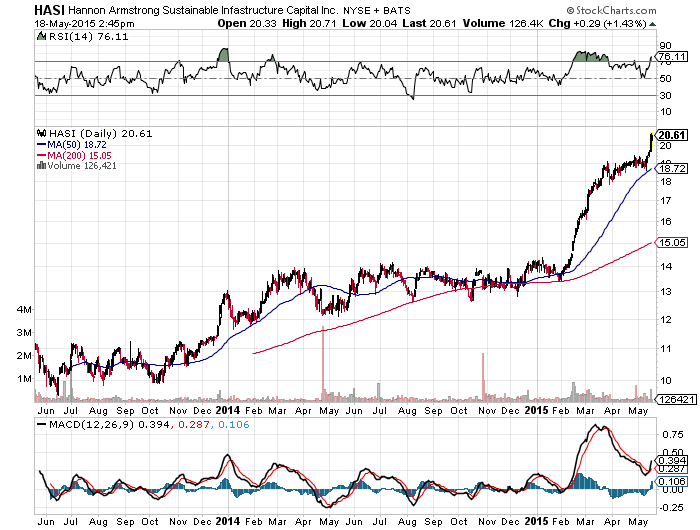 While I'll be the first to admit that I am, without a doubt, an unapologetic environmentalist, I sure as hell don't invest in renewable energy companies unless they're going to make me money. And HASI is among many that have helped me turn my passion for sustainability into an opportunity to create significant wealth.

No, my swagger doesn't even come close to that of Warren Buffett's. And truth be told, if I boasted just 0.5% of his net worth, I'd be sitting in my hammock in Kauai right now, sipping a Mai Tai and reading the newspaper.

But one thing's for certain...

Without the renewable energy space, many of my readers would have much thinner wallets right now. So yes, even if you couldn't care less about the toxicity of our air or the rapid erosion of our once-healthy soil, make no mistake — investing in renewable energy has more to do with profits than it has to do with tree-hugging.

And if you don't believe me, ask yourself why Warren Buffett owns more than $15 billion worth of wind and solar assets. That's billion — with a “B.”