Warren Buffett, Cash, and the Greatest Hamburger of All Time

Lee Iacocca was responsible for both the Ford Mustang and the Chrysler minivan, two of the bestselling automobiles outside the VW Beetle. You can get a classic Mustang under $25K because Iacocca sold millions of them.

It’s a laughingstock now, but when the minivan launched in 1994, it sold a record 140,773 in the first three months, outselling every passenger car on the road including the Ford Taurus, Chevy Cavalier, Honda Accord, and Toyota Camry.

Iacocca cut 10 inches off the backend of the K-car so two would fit on a flatbed rail car and thus reduce shipping costs. But it is his hamburgers that changed my life.

In his autobiography, Iacocca tells the story that in the Ford Motor Company's executive dining room, Henry Ford II rarely ate anything but hamburgers.

Furthermore, Ford complained that his own personal chef at home couldn't make a decent burger. In fact, no one made burgers as perfect as the ones at the executive dining room.

Wanting to impress Ford and undercut the other managers at his next cookout, Iacocca went to the kitchen and asked the chef to show him what he did to make Ford’s burgers so good. The chef went to the fridge, grabbed a thick marbled rib eye, ran it through a grinder, patted up a meat puck, and tossed it on the grill.

Sometimes, on certain occasions like yesterday, I, too, make the best burger known to man, much to the consternation of the would-be grill masters in attendance.

Anyway, while we were sitting around feasting on Labor Day, an older friend told me he made $8,000 last week despite the fact that all of his investments were very conservative.

This was a man who had survived and thrived through five of six stock market corrections. He added, “It makes me worried.”

Back in 1999, I was a young and hungry trader. It was the mother of all tech booms, and you could toss money at anything and make more of it. If I remember correctly, and I do, my total portfolio returned 110% that year. It was easy money.

At the time, Warren Buffett was going on about never buying tech stocks or emerging markets. I thought he was an old codger whose time had passed. After all, he was in his late 60s.

Two booms and busts later, my thinking has changed. Buffett kept his money out of the dot-com boom. But he bought heavily in 2000 and 2001 and again in 2009. He set the bottoms both times.

Back in the late ’90s, Warren Buffett was saying he had nothing to buy, as the entire market was overvalued and tech investors had lost their minds.

Of course, Buffett is the world’s greatest and most famous investor, and when he does something, you have to pay attention. In his latest shareholder letter, he said, “Not enough good companies were available to buy at reasonable prices.”

Lately he is building cash so he can put it to use when the market does bottom. 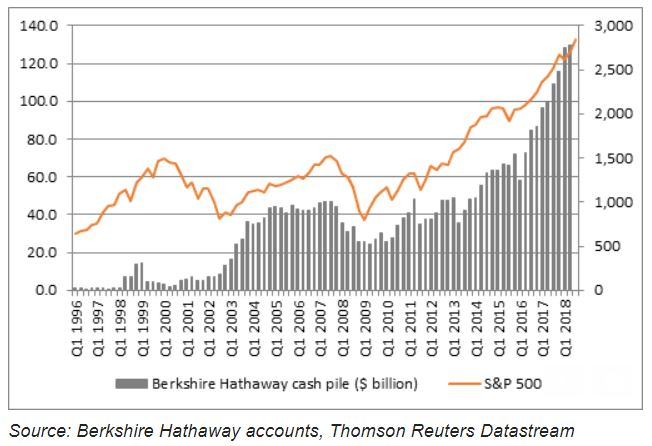 Warren is going to cash because what he has called his favorite indicator is showing an overbought market. When the stock market to Gross Domestic Product ratio is above 100%, a correction is sure to follow. 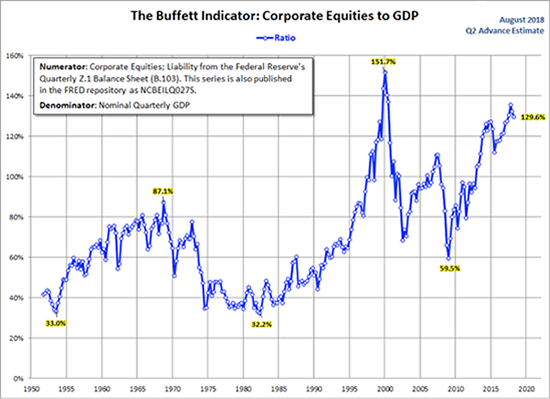 That’s not to say the market will crash tomorrow. Trends can last a lot longer than you think. It wouldn’t surprise me if this bull market, because rates were so cheap for so long, surpassed the 2000 bull market in terms of valuation.

In 2000, before the bust, the S&P 500 had a P/E ratio of 35. Today it is at 25. The question is, how much of your money do you want to use chasing the top and hoping you get out before the bust, rather than building cash to buy when stocks are on sale at the bottom?