Mirror Mirror on the Ground, Who's the Cheapest Watts Around?

The effort is in support of President Obama's target to generate 10% of U.S. electricity from renewable sources by 2010, and 25% 2025. The nation currently generates more than 1000 megawatts (MW) from photovoltaics, and 600 MW from thermal concentrated solar power (CSP) systems.

The BLM plans to spend $22 million evaluating about 670,000 acres, or more than 1,000 square miles of land, in Nevada, Arizona, California, Colorado, New Mexico and Utah in search of sites with at least three square miles of good solar exposure, favorable slopes, access to roads and transmission lines, and minimal environmental impact.

Salazar estimated that the areas could generate nearly 100,000 MW, and announced his intention to have 13 commercial scale solar power plants under construction by the end of 2010. BLM is already considering environmental reviews for two NextLight Silver State arrays in Nevada, totaling 407 MW. (For comparison, typical coal-fired power plants in the U.S. are 500 to 700 MW in size. One megawatt of coal-fired capacity will power 400 to 900 homes, depending on their location and demand for air conditioning.) The BLM has already begun the process of developing environmental impact statements for three solar projects in California, including two by Stirling Energy Systems totaling 1,600 MW of capacity, and the 400 MW Ivanpah project by BrightSource Energy. 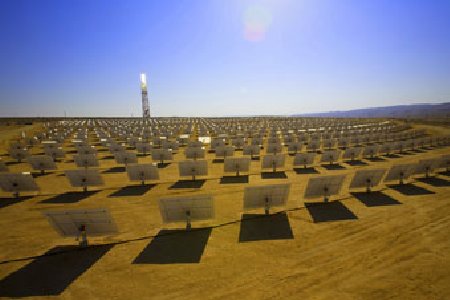 BrightSource Energy CSP plant (pictured on the right), which uses an array of small, flat mirrors on heliostats that track the sun and focus its rays on a central "power tower" where the generator is located.

Applications for 10 MW or larger plants would be fast-tracked under the new program, which will radically streamline the permitting and development process and assume responsibility for one of the most burdensome aspects of getting utility scale solar plants built: environmental reviews.

The BLM has been struggling to process a backlog of pending applications for 470 renewable energy projects, including 158 commercial solar projects totaling some 97,000 MW—enough to power 29 million homes, and equivalent to 29% of the nation's electricity demand, according to the agency.

At present, zero permits have been approved. Progress has been impeded by concerns over species protection, availability of water (primarily for the cooling cycles of the power plants), and a maze of approval processes in multiple government agencies with overlapping jurisdictions.

Projects nearing approval will be expedited under the plan, and existing applications for projects in approved areas will be given priority.

Environmental reviews have been especially troublesome, since utility scale solar projects require large (10-15 square mile) areas to be "walled off." But isolating even a five square mile tract can impact wildlife corridors and drainage. Many projects have been put on hold over concerns about endangered and protected species including the Mojave ground squirrel, the desert tortoise, the California kit fox, and the Yuma clapper rail.

In March, California Senator Dianne Feinstein threatened to propose legislation that would designate more than 800,000 acres between the Mojave National Preserve and Joshua Tree National Park as a national monument and off-limits to development, because it contains desert tortoise habitat, wildlife corridors, and endangered cactus. She wrote Salazar, requesting that 12 proposed solar projects in the area be stopped.

At the Concentrating Solar Thermal Power 2009 conference San Francisco, CA last month, I came to understand just how challenging the environmental aspect was in a presentation by Charles Ricker, the Senior Vice President of Business Development for BrightSource Energy. Oakland, California based BrightSource is one of the world's premier CSP developers, with 2.6 gigawatts (GW) of commitments, equivalent to 25% of the world's solar thermal generating capacity.

Ricker related his company's long and torturous slog to build the Ivanpah project. After securing a power purchase agreement (PPA) for 300 MW with California utility PG&E and a 100 MW PPA with Southern California Edison, getting well along in the permitting process with the California Energy Commission (CEC) and BLM, raising capital, securing access to transmission lines, buying a Siemens turbine and a Riley boiler receiver, and negotiating a contract for construction that was to break ground later this year, the discovery of 25 desert tortoises in the area held up the whole works.

Avoiding such deal-killers will be a key focus of the new BLM process. The study will specifically exclude "sensitive lands, wilderness and other high-conservation-value lands as well as lands with conflicting uses" such as mining claims, according to the Department of Interior press release. "Areas with a known density of cultural sites" and those "of known Tribal concerns" will also be excluded.

Once a given area is approved for development, companies applying for projects will be able to incorporate the BLM clearances as part of the environmental impact studies required by the National Environmental Policy Act. Consequently, it should greatly reduce the cost of doing the environment evaluations, as well as the investment risk.

Helping to shoulder the burden of environmental clearing, permitting and approval is a critically important benefit at a time when raising the necessary capital continues to be a major hurdle. Banks are still very reluctant to lend for renewable energy projects. One presenter at the CSP 2009 conference explained that Florida Power & Light had to tap 12 banks to round up a lousy $350 million in financing for what was essentially a no-risk renewable energy utility project!

Another presenter noted that banks will still not finance storage systems for CSP projects because of their lack of a commercial track record. This is extremely unfortunate as thermal storage offers the potential for CSP plants to operate 24/7 and compete head-to-head with coal-fired and nuclear plants, providing round-the-clock "baseload" capacity. Numerous technologies including high pressure concrete, mineral oil, molten salts, and direct steam storage are now available or under development that could crack this all-important limitation and pave the way for utility solar to take over a large part of the nation's electrical supply load. Without storage, solar plants can't function when the sun is down.

In an effort to make utility scale solar projects more attractive to investors, a host of government incentives have been launched.

First, the new BLM process will be funded by $41 million dollars given to the agency under the American Recovery and Reinvestment Act of 2009 "to advance the nation's development and transmission of renewable energy on public lands."

The federal stimulus package also offered a package of incentives designed to further minimize the investment risk for commercial solar plants. A cash grant program from the Treasury covers 30% of the project cost with no limit, and functions like a tax credit. Better yet, Treasury must grant it if a project meets the application requirements.

Congress also appropriated $6 billion for a program administered by the Department of Energy that will subsidize the risk premium (10-15% of the total loan) to backstop the investment risk for projects that are ready to start construction by Sept 30, 2011.

Additional financial incentive programs are available at the state level. Arizona will assess property taxes on a mere 20% of the depreciated property value. New Mexico offers a production tax credit against state taxes for 10 years, capped at 200,000 MWh/year, and a 6% "advanced energy tax credit." Nevada has an abatement incentive that will reduce normal sales taxes of 6.5% - 7.75% to just 2.6%, and reduce property taxes by as much as 55% for CSP projects; the incentives expire in 2049. Colorado offers a permanent property tax assessment that will value solar energy projects at the same level as comparably sized non-renewable facilities, giving them an assessed value that is far lower than the actual value on a sliding scale. Utah offers a sales tax exemption as well.

With policy and financial support at its back and the BLM clearing the path ahead, the future looks bright indeed for utility scale solar, the cheapest solar watts around. It's not easy to find publicly traded stocks that are positioned to benefit from the technology's next wave of expansion, but that's why we're here.