Over the next six months, you're going to make a fortune investing in this one metal...

And I'm not talking about precious metals like gold or silver. Or even a common industrial metal like copper or zinc.

Here's the biggest problem with the uranium market...

Uranium is neither sexy nor exciting. There are no great tales in the uranium market to tell. And human beings are simply more persuaded by a good story than by a good argument (see: “Narrative Paradigm Theory”). So the uranium market has almost always had difficultly finding investors.

But I don't care about stories. I care about numbers and ROI. And the returns from high-quality uranium stocks over the next several months are almost inevitable. Here's why...

Right now, there are currently almost 450 nuclear reactors supplying power for over 30 countries around the world. These reactors supply approximately 2.5 TWh of electricity.

At the current rate of consumption with conventional reactors, the world's supply of recoverable uranium will last for about 80 years.

But that's only at current consumption rates.

There are over 60 new nuclear reactors being built around the world at this very minute, and another 150 are in different stages of planning. These new reactors will add over 1 Twh of nuclear-generated electricity. But they also mean the world's supply of recoverable uranium is down to 60 years. And it doesn't stop there.

Now, believe it or not, uranium is actually quite common. Uranium is everywhere. In fact, it's one of the most common elements on Earth. But uranium is very rarely found in high enough concentrations to make mining the metal economically feasible.

Over 40% of the entire world's known recoverable uranium resources are located in two countries: Australia and Kazakhstan. This creates conditions for severe supply constraints that can lead (and has led) to price bubbles.

Back in 2007, the price of uranium skyrocketed to $135/lb. after Cameco's Cigar Lake Mine flooded. 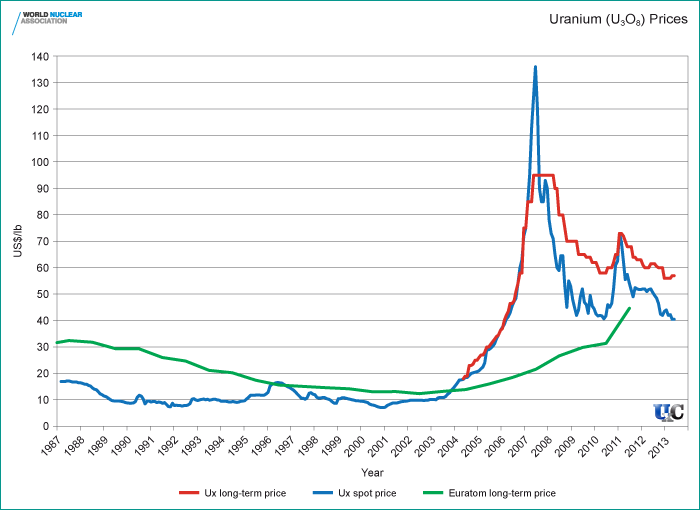 Cigar Lake is a significant uranium deposit, being the largest undeveloped high-grade uranium ore deposit in the world. But it's still only one single deposit. And the 2007 uranium price bubble shows us exactly how violently prices can react from problems at one mine.

Uranium prices and associated stocks have already had a great run since the beginning of the year. But as demand grows and supplies remain uncertain, uranium stocks will be rapidly rewarded.

Investors should look to add high-quality and currently well-financed uranium production and development stocks to their portfolios before the uranium story becomes bigger.