"Prediction is very difficult, particularly about the future." - Niels Bohr, winner of the 1922 Nobel Prize for his work on the structure of atoms

In my line of work, nothing is so bedeviling as predicting the price of oil and gas.

Accordingly, most analysts who have been at the study for a few years take pains to avoid making price predictions. Good calls are rarely remembered, and bad calls are rarely forgotten. Price targets become fodder for those who lay in wait for a "gotcha" moment that might stain one's credibility.

Those in the oil industry also try to avoid discussing price. When it takes ten years or more and billions of dollars to develop a large deepwater oil project, the volatility of prices that we saw over the last year makes for a very difficult investment planning horizon. Oil companies must therefore take a long view on their commitments, betting that prices will rise over time.

In a blogger conference call last week with Robert Ryan, Chevron's vice president of global exploration, I asked three questions about how oil prices affect their decisions to pursue new deepwater projects. He declined to comment specifically on all three, emphasizing their long-term strategy. I really couldn't blame him for it. (Chevron just began pumping oil on May 5 from its new Tahiti platform in the Gulf of Mexico, which is operating in 4,100 feet of water and lifting oil from 26,700 feet below the seabed, making it the deepest well in the Gulf. The cost of the first phase of the project is $2.7 billion, and the platform is expected to ramp up to a flow rate of approximately 125,000 barrels of crude oil and 70 million cubic feet of natural gas before the end of the year.)

For oil and gas investors, though, there is no skirting the price question. To get an idea of where prices might be going, we must look at the market from several different angles.

First, consider the fundamentals of supply and demand. On this point, the data is decidedly bearish. In its monthly Oil Market Report issued last Thursday, the International Energy Agency (IEA) revised its world oil demand number downward by 2.56 million barrels per day (mbpd) to 83.2 mbpd, which would make the sharpest annual decline since 1981

At the same time, worldwide inventories are extremely high, with some 150 million barrels of oil and products estimated to be in storage at sea. An historically long and sharp period of contango in the oil futures curve has encouraged speculators to buy oil while prices were low in Q4 2008 and Q1 2009, and store it until prices returned to normal levels. (For more on this subject, see "EIA's Oil Outlook Report.")

But if demand is still falling and supply is still rising, which should bode lower prices, then what shall we make of the fact that oil hit a 6-month high at $60 last week, after falling into the low $30s?

I tend to agree with the IEA that rather than responding to fundamentals like supply and demand, oil has been following the broader market. Oil prices have followed the major indexes very closely since the market crash last October, and have trended up along with the overall market since the March 9 bottom. In other words, oil has been trading on sentiment about recovery, not fundamentals.

However, there is some indication that the oil trade may be getting back to normal in that it is once again trading inversely to the US dollar. The relationship fell apart from roughly October through February as the markets became singularly focused on the financial and credit crisis, but now appears to have returned: 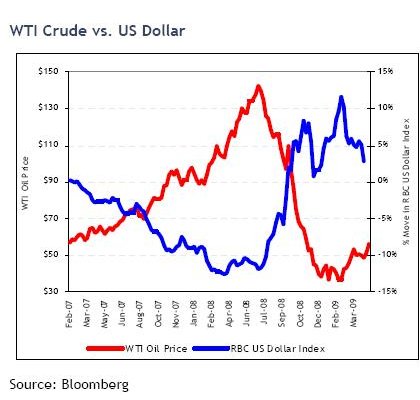 For further reading about this important relationship, see "Oil and the U.S. Dollar."

Another signal of returning normality is in the implied volatility of the oil futures curve, which is now within 3% of its 52-week low: 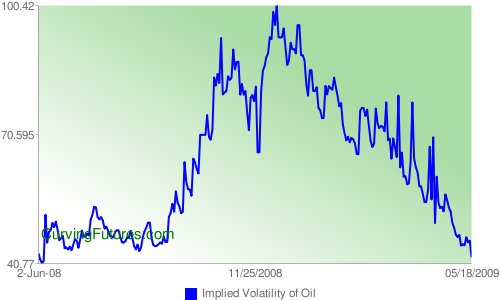 This suggests two things: One, that the uncertainty about the future price of oil has diminished, and investors are less interested in insurance against sudden price moves; and two, that the market is probably underestimating the likelihood of future price spikes.

I think we can safely rule out another factor that was very influential on oil prices last year: that of piracy, sabotage and geopolitical posturing by major oil producers. All of that continues to this day—indeed, the MEND militant group in Nigeria struck a new high note of aggression last week, declaring a civil war against government forces and warning foreign oil workers to evacuate from the Delta immediately—but with global spare production capacity now at least 4 mbpd, it really doesn't have the ability to move the market.

A final important consideration is the production cost of oil, on which I have written frequently since last November. (See: "The Truth Behind Low Oil Prices," "The Looming Energy Crisis," "EIA's Oil Outlook Report," "OPEC Defends Oil Prices," "Oil Prices Are Wrong—Very Wrong," and "The Sleeping Threat of Low Oil Prices.") At under $65 a barrel, the marginal production on which we now depend for future supply simply doesn't make economic sense. Oil really needs to be over $100 to ensure supply a decade from now.

This underpinning factor has prompted the Secretary General of the IEA, Nabuo Tanaka, to warn that oil prices could reach as high as $200 a barrel over the next four years when global demand recovers. Still, while this argues strongly for taking long-term positions in oil, it is a fundamental factor, and as such probably bears little on the short-term price outlook.

At this point, the outlook is substantially murkier. We're almost up to a good price floor to support renewed drilling, but we're not quite there yet, and rig counts continue to fall. Supply and demand data are bearish, but the broader market's continued move upward is bullish.

Investors seeking a safe haven against the renewed specter of inflation in the wake of quantitative easing are beginning to nibble again at the commodity sector, and hedge fund money appears to be coming off the sidelines and establishing positions again, portending another leg up in prices. At the same time, I think the unwinding of the speculative storage play in oil may be in the cards within the next several months. Should long-dated futures begin to fall, or near term prices reach toward $70, it could unleash a flood of selling of all that oil in storage, and crush spot prices.

Given the uncertainty of the price outlook, I think it's prudent for active investors who are sitting on double-digit gains to take some off the table at this point. Investors who followed my thesis and began accumulating oil since November have enjoyed gains of 50-100%, because oil had been so deeply oversold. It took guts to do that while many pundits were calling for $25 a barrel, but from a fundamental perspective, it was really a no-brainer.

I would advise those who missed the move up since March against taking large positions now, favoring instead a strategy of slow accumulation as a hedge against the broader market selloff that I continue to believe is somewhere in the fog ahead. We're not out of the bear market woods yet, and caution remains the watchword. Should the market give up its recent gains and take oil down along with it, there is little in the way of fundamentals (other than production cost) to support prices through the rest of this year.

At the same time, short-term investors should be able to pocket some quick gains in the oil patch as long as the overall market continues to move up. Financials remain the key sector to watch here.

Finally, for long-term investors willing to hold oil for another year or more, I believe the fundamentals support holding onto to those positions and adding to them on the dips. Likewise, investors who took my suggestion to start accumulating positions on natural gas at the beginning of April (see "Natty Dread") had an opportunity to sell it with a 20% gain one week ago, and are now looking at another buying opportunity as it has descended to under $4 per Mcf again.

P.S.Whether you're investing in the long or short run, the truth is that there are strong gains to be made in the markets. My colleague, Ian Cooper, is putting that fact to the test. Ian recently began his 'Fifty-Trade Gauntlet', proving that smart investors can still make a fortune in today's market climate. And if you haven't had the chance yet, I suggest you take advantage of this opportunity. You can learn more about Ian's "Trading Gauntlet" by clicking here.

P.P.S Thanks to options trader and blogger Steven Place (@stevenplace on Twitter) and Jeffrey McLarty of (@jmclarty) for their contributions to this article.