One of the primary complaints of the U.S. is that we hardly manufacture or export products to expand the economy, and these criticisms are justified. We live in an age where shuffled debt and finance is the life blood of the economy, and it is the wrong way to go. And the U.S. is no different. 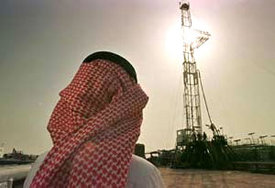 The U.K. also derives its economic livelihood on debt and the markets. If you compare the U.S. and England to manufacturing economies like Germany, China, and Mexico, you’ll see that debt and manufactured financial bubbles have led to ruin and vast consequences for average citizens in the debt-based economies.

But the U.S. is making up for its lack of exports and manufacturing in regards to energy.

The U.S. will officially surpass Saudi Arabia as the world’s largest producer of oil, when NGLs and biofuels are added to production levels, according to projections from energy firm PIRA Energy Group.

Last year, OPEC increased its output, but production still trailed the United States. The Saudis have a goal of increasing output from 12.5 million barrels a day currently to 15 million barrels per day by 2020.

And if the U.S. keeps its rate steady – a 25 percent increase in oil production from September 2012 to September 2013 – oil flow will double every three years, The New American reports.

This is great news across the board. Refiners are already decreasing reliance on imports from OPEC and Venezuela by switching to domestic shale oil. And it is an ever-increasing step in reducing reliance on oil from OPEC. This could mean greater national independence, and the domestic market will not be as vulnerable to ongoing conflicts in the Middle East.

Saudi Arabia surpasses the U.S. in crude because crude is extracted from the ground on a conventional level. But the U.S. has the upper hand over the Saudis, as the Kingdom has yet to extract shale resources. To date, only North America has been able to successfully extract shale oil for commercial use.

Other OPEC nations, like Algeria, have some of the largest shale reserves in the world, but due to instability and lacking technology, development of these resources will not happen anytime soon. Other nations like China, Poland, or Argentina may join in with commercial shale production in the coming years.

Although NGLs are being produced, the primary drivers of the shale boom have been natural gas and oil.

Whereas oil is a liquid, natural gas is an odorless fuel primarily composed of methane. Natural gas can be used to heat homes, fuel factories, and manufacture goods. Natural gas prices may be on the slump, but its low prices are making it easier for manufacturers to power factories and churn out more products.

At the moment, there is more demand for shale oil than shale gas, primarily because prices for natural gas are too low to keep up commercial production. Shale oil has not suffered the same fate, but there is a risk unless exports are on the table.

The best places to look for the most shale growth are smaller, domestic companies focusing on shale oil. The most activity you’re going to see is in the Eagle Ford of South Texas and the Bakken of North Dakota.

The shale oil boom receives criticism, since Texas and North Dakota are the only two major producing oil states in the region, but we’re making new discoveries – not only within these shale states, but also in other parts of the country. The Bakken has the relatively undiscovered Three Forks Formation, and the Permian Basin of West Texas has the Cline Shale.

For natural gas, the Eagle Ford has deposits of NGLs. North Dakota is also a good place to look, although producers are burning off natural gas due to lack of transportation infrastructure. You may also be able to find natural gas investments is on the East Coast, where the Utica Shale of Ohio and the Marcellus Shale of Pennsylvania are developing natural gas resources.

Right now, the shale gas market needs more conversion of natural gas into liquefied natural gas for export abroad to Asian markets. This will heighten the price of natural gas and give producers an incentive to revamp mass production. But the Department of Energy has placed an unofficial cap on these exports, keeping prices low, and making natural gas a less valuable commodity.

The best thing for companies and investors to do at the moment is to invest in higher forms of drilling technologies of the future to keep the shale boom going. Regardless of what the government or resource nationalists have to say, there will have to be a wider market for exporting natural gas and shale oil.

As production of shale oil ramps up, there will inevitably be supply gluts and price declines. The U.S. will have to export some of these resources to keep drilling profitable. Analysts believe the U.S. will have the capacity to export oil within the next five to ten years.

I see long-term growth in the U.S. shale boom, and I see it lasting beyond 2030.

According to the International Energy Agency, the U.S. can become free of OPEC imports by 2030. This is only a projection, but it is certainly a goal worth pursuing.