There are a number of Arab media reports that have said that Saudi Arabia has permitted Israel Air Force choppers to land in its country.

The reports go on to claim that Saudi leaders have offered the IAF a logistical base in the northwest that would act as a stage for an aerial assault against Iran... 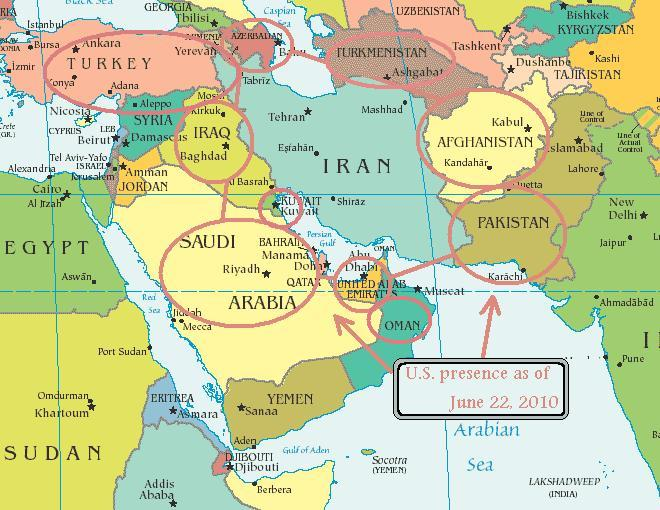 This is further backed by a report in the Times of London from two weeks ago; the story said the Saudi Royal Family has agreed to allow IAF jets in the country's airspace.

Yet both the IDF and Saudi officials have denied these reports.

Here is a must-read on the change in the balance of power in the region due to a Turkey-Iran alliance.

Israel is the enemy

That said, Riyadh isn't happy about the possibility of an Iranian nuclear bomb. The Saudis opened an air corridor and leaked the story to show Iran that there are more options than economic sanctions.

The Iranian press has reported a large amount of U.S. ground forces amassing in neighboring Azerbaijan.

Iran's Revolutionary Guards Brigadier General Mehdi Moini said Tuesday that his forces are mobilized “due to the presence of American and Israeli forces on the western border.” The Guards reportedly have called in tanks and anti-aircraft units to the area in what amounts to a war alert.

Two weeks ago, according to Radio Free Europe, President Obama promised Azerbaijani President Aliyev that it would make its dispute with Armenia a top priority.

Fleet Week in the Persian Gulf

Earlier in the week, the Pentagon confirmed that an unusually large fleet of U.S. warships had indeed passed through Egypt's Suez Canal en route to the Persian Gulf. At least one Israeli warship reportedly joined the American armada. There are also Israeli nuclear armed submarines.

Three German-built Israeli submarines equipped with nuclear cruise missiles are to be deployed in the Gulf near the Iranian coastline.

The first has been sent in response to Israeli fears that ballistic missiles developed by Iran, Syria and Hezbollah, a political and military organization in Lebanon, could hit sites in Israel, including air bases and missile launchers.

The submarines of Flotilla 7 — Dolphin, Tekuma and Leviathan — have visited the Gulf before. But the decision has now been taken to ensure a permanent presence of at least one of the vessels.

Ahmadinejad eggs them on

"The Zionist regime is too weak to launch aggression against Iran. They long to deal a blow to Iran, but wouldn't dare even think about it," said Mahmoud Ahmadinejad. "They all know that playing with Iran is like playing with a lion."

An attack by Israel is not unprecedented. In 1981, the Israelis bombed a nuclear plant which they believed was designed to make nuclear weapons that would destroy Israel.

The Israeli government said at the time: "The atomic bombs which that reactor was capable of producing whether from enriched uranium or from plutonium, would be of the Hiroshima size. Thus a mortal danger to the people of Israel progressively arose."

The looming Iran War is not priced in 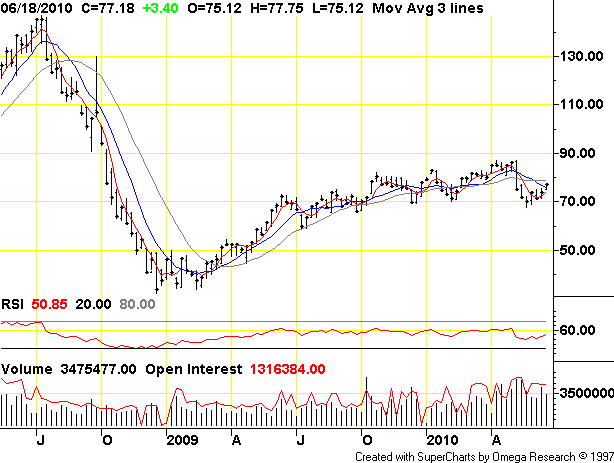 As you can tell by the crude oil price chart above, there is no fear premium as of yet.

The BP oil spill in the Gulf of Mexico has overshadowed every other oil story.

According to the U.S. Energy Information Administration, Iran has the third-highest oil reserves in the world (137 billion barrels) and is second only to Saudi Arabia in production (at 3.8 million barrels a day).

Iran exported 2.6 million bb/d a year in 2008. Most of this oil goes to Japan, China, India and South Korea.

That said, oil is a fungible commodity. If the countries that are accustomed to getting Iranian oil no longer do so, they must buy it on the open market.

And this will drive up the price.

No one knows... But it seems worth a hedge.

Or you could buy some small oil companies that have nothing to due with the U.S., the Middle East, or North Africa. I'll give you one right here.