The U.S. Energy Information Administration (EIA) says the American energy market will continue thriving over the next 48 months.

In the agency’s recently released Short-Term Energy Outlook, the EIA concludes the United States will remain a net exporter of crude oil and other petroleum products through at least 2021. Secretary of Energy Dan Brouillette said in a statement:

From being a net exporter of oil, to growing our renewable generation, the Trump Administration has created an environment for growth and prosperity in American energy. While our energy production and exports continue to soar, we are simultaneously leading the world in reducing energy-related carbon emissions. Data released today by EIA projects the U.S. will continue this trend, predicting further CO2 emissions reductions in 2020 and 2021.

The EIA forecasts renewable energy generation will grow from a 17% share of U.S. electricity generation in 2019 to 22% in 2021.

As a result of increasing renewable energy generation and carbon cutting policies, energy-related carbon dioxide (CO2) emissions will decrease by 2% in 2020 and by 1.5% in 2021.

Please take note of that last forecast again: [Thanks to] carbon cutting policies, the energy-related carbon dioxide (CO2) emissions will decrease by 2% in 2020 and by 1.5% in 2021.

But something was done. ClimateActionTracker.org writes, “Current policies presently in place around the world are projected to reduce baseline emissions and result in about 3.0°C warming above pre-industrial levels.” 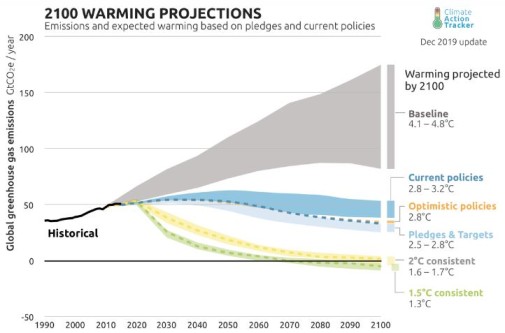 The “baseline” projection in the chart above projects the world without policies. Point is, climate change advocates were successful; they already got what they asked for. So they can stop fighting, right?

They can stop writing their global warming books and making documentaries? They can stop attending speaking engagements and climate conferences, right? They can stop posting on Twitter and Facebook, right?

Despite forecasts of decreasing carbon emissions, climate warriors are still going to act like the sky is falling. They'll continue to get attention. However, I think the Greta Thunbergs of the world will soon become less powerful as more and more people learn that policies have already fixed the carbon problem. And I believe that will benefit the crude oil and petroleum product market.

The agency predicts WTI crude oil prices will average around $60 per barrel through 2020 and 2021.

Meanwhile, the agency says American crude oil exports to are set to increase by 75% between 2020 and 2021.

Today, the Permian Basin is the largest producing oil field in the world — even bigger than Saudi Arabia’s Ghawar. The EIA reports oil production from the Permian currently at 4.2 million barrels per day. That's compared to Ghawar's production of 3.8 Mbbls/d.

The Permian Basin is also the largest oil and gas region in the world right now in terms of production, but estimates of its underdeveloped energy resources are growing.

Resident Permian Basin expert Keith Kohl says, “For sure, there are billions of barrels of recoverable oil in and around the Permian Basin that haven’t even been counted yet — potentially trillions of dollars just waiting to be found.”

Keith Kohl recently published an entire report that discusses these “secret” oil and gas basins in Texas. I highly urge you to look into these alternative basins before Main Street learns about them.