Oil prices are up this week as tensions over U.S. sanctions against Iranian crude importers heat up.

On Monday, Bloomberg reported that OPEC officials from Saudi Arabia said they are comfortable with Brent oil over $80 per barrel, as markets adjust Iranian export cuts amid U.S. sanctions. 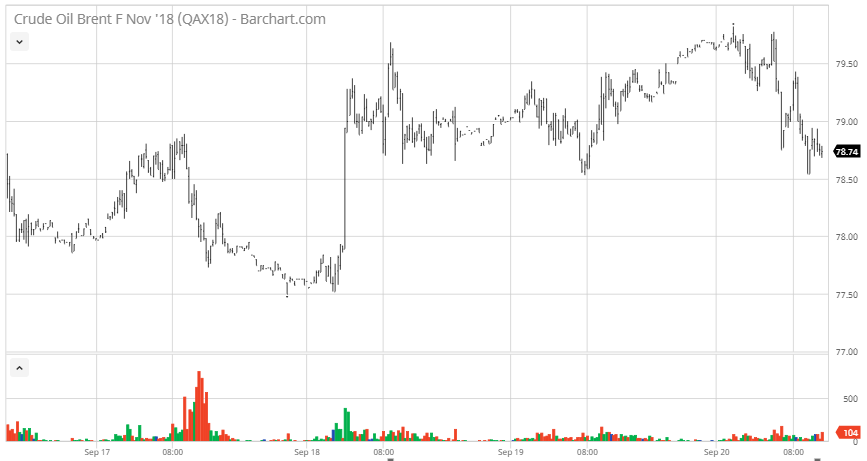 As he is wont to do, President Trump responded to the news with a scathing tweet, saying OPEC needs to “get prices down now!”

This is not the first time the president has blamed OPEC for keeping oil prices high on Twitter. Back in July, the president tweeted, “The OPEC Monopoly must remember that gas prices are up & they are doing little to help. If anything, they are driving prices higher as the United States defends many of their members for very little $’s. This must be a two way street. REDUCE PRICING NOW!”

And this is just one of among a half-dozen other tweets the president has fired off criticizing OPEC.

Bank of America Merrill Lynch analysts say Iranian crude oil exports have already declined by 580,000 barrels per day in the past three months leading up to the deadline. So it's clear Washington's sanctions will have at least some effect on Iran's oil sales.

For some major importers like China and India, however, cutting oil supplies from Iran is no easy task. Long-term contracts, debts, balances, and many other accounting issues need settling. And they need to find new suppliers in a demand-driven market.

China is already deeply embroiled in a trade war with Washington. Trump just slapped another $200 billion in tariffs on China. So it's unlikely China will comply fully with Washington's sanction demands.

India, however, is a different story.

Right now Trump doesn't have trouble with India. And I suspect the country doesn't want any. India has enough internal problems itself, including currency woes. The rupee has declined more than 13% this year against the USD, making it one of the worst performing currencies this year.

India is currently seeking exemption from U.S. sanctions. And I do think it's likely Washington will grant the country an additional short grace period to find other suppliers. In the event there is no additional grace period or exemption, however, the Economic Times of India reports that officials have said they are prepared to deal with any fallout.

Right now, Brent crude for November delivery sits just below $80 a barrel. But as the November 5th deadline draws closer, I think we can expect more rhetoric coming from both OPEC and Trump, as well as increased volume and volatility in the market leading to higher prices. That will be great for traders in the short term.

Iran is currently one of the world's largest oil exporters. If Trump's plan to stop the nation from generating revenue from oil works even mostly, the world could lose over a million barrels per day in supply.

This kind of short-term cut to global supplies would no doubt have a significant effect on market prices. It could even be the trigger that drives oil prices closer to the $100 level.

But Energy Investor editor Keith Kohl reminded me the other day, “Just because the market forgot oil is finite doesn't mean geology did.”

There are a lot of things that have suppressed oil prices in the past few years. Among them have been new ways to get untapped oil resources out of the ground, such as fracking and a renaissance in U.S. oil production. But it's important to remember that this is just short term, as all resources are finite.

And while oil prices are set to run in the short term amid geopolitics, in the long term, it's geology that will drive the market.

Oil over $100 will eventually be the norm. It's only a matter of time.

The entire economy had just crashed around our ears. The stock market was in free fall. Our friends and family were being kicked out of their homes. Americans were losing jobs while unemployment skyrocketed.

Financial insider Chris DeHaemer’s highly trained eye saw this crisis 10 years ago. And he sees all the signs of it happening again.

But you’re not completely powerless. Chris DeHaemer was able to successfully navigate his members through the stock market crash of 2008, leaving their homes and their finances completely untouched.

The upcoming Christmas Massacre is going to make the stock market crash of 2008 look like small potatoes...

But there’s still time to prepare. You can ensure your financial security and weather the coming financial crisis like a pro.

Let Chris DeHaemer show you how.