The Whole Thing Was a Lie!

Whatever you want to call it, in 2007, I was completely tricked into believing that a Chinese electric bus company was about to put dozens of new electric buses in America’s cities and towns.

The entire company was a scam, but management played its hand well.

Set up in a showroom in Los Angeles, I was escorted by a very attractive investor relations rep to see the new bus with my own eyes.

It was just as I had expected...

Modern design, bright colors, and no internal combustion engine to be found anywhere.

Everything I was told about the company seemed solid. That is, until I found out the whole thing was a giant lie.

I won’t get into the nuts and bolts of what happened, but let’s just say these folks would’ve made a fortune back in the day selling truckloads of snake oil.

The silver lining to this story is that after being duped by these charlatans, I haven’t been duped since.

My BS radar is finely tuned, and the due diligence I now perform far exceeds anything I took on in 2007. The downside, however, is that talk of electric buses has acted as a sort of kryptonite for me.

Sure, I’ll meet with folks and take company tours, but after my previous experience, I’ve been incredibly gun-shy when it comes to electric buses — despite the fact that these vehicles do exist and in fact are quite impressive.

And to be honest, unless I see a name I trust building these things, I tend to look the other way. But maybe it’s time to reconsider.

Last week, we learned that BYD Company (OTC: BYDDF) struck a $30 million deal with UK bus manufacturer Alexander Dennis Limited that will facilitate the introduction of London’s first large-scale electric bus fleet. This will actually be the largest fleet of full-sized electric buses in Europe.

While the economics do favor these electric buses (when figuring in lifetime costs), the real push here is that Transport of London has a mandate in place to get all single-deck buses completely emissions-free by 2020.

This is a tall order, and it looks like BYD has been chosen to lead this endeavor. For the sake of the emissions-free plan, however, I do hope the buses deliver and don’t fall victim to sloppy manufacturing or major technical glitches.

BYD currently has about 3,500 electric buses in service throughout the world. This is a pretty impressive figure for one company. So BYD has a real chance here to make a name for itself — not as an untrustworthy Chinese company, but as a multinational bus manufacturer that could realistically crush the competition.

Whether or not BYD can do this will be determined by how well this London fleet performs.

As for the stock? Well, here’s how it’s performed so far this year. 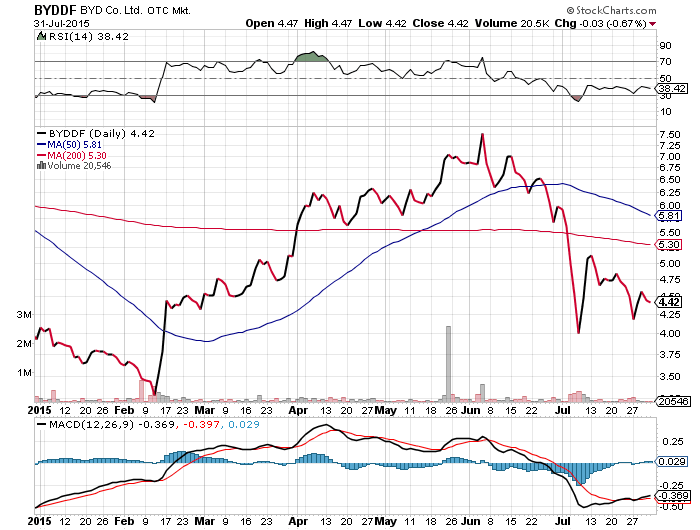 One thing BYD has going against it is that it’s a Chinese stock. And I don’t know too many folks particularly bullish on China right now.

That being said, if BYD is able to land the big deals — like this recent London deal — outside of the Middle Kingdom, it could be in a good position to thrive.

As for me, I think I’ll still remain on the sidelines. Despite the potential for a nice run, I’m simply too spooked by China right now to risk it.

But I’ll be honest: I do hope BYD is successful in its quest to be the biggest electric bus manufacturer on the planet. Certainly we need more competition in this area.