Time To Buy the Dips in Small Cap Oil

Written by Christian DeHaemer
Posted May 16, 2016

That said, it is now trending back up. Here's why... 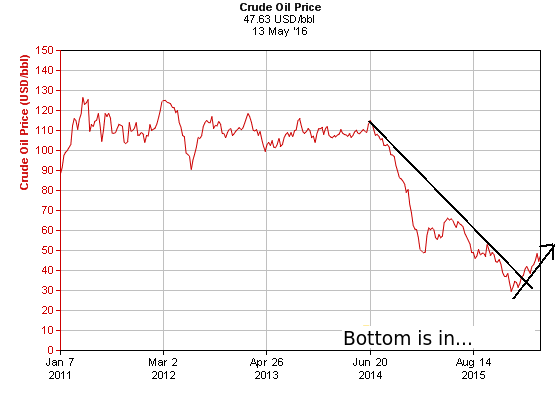 Last week the International Energy Agency said that oil supply/demand is near equal and will change in the second half of 2016.

Production outside the Organization of the Petroleum Exporting Countries will decline by 800,000 barrels a day this year, the adviser to industrialized nations said, an acceleration from the previous forecast for a drop of 710,000.

Since the start of 2015, 130 North American oil and gas producers and service companies have filed for bankruptcy owing almost $44 billion, according to law firm Haynes & Boone. The tally doesn’t include Chaparral Energy Inc., Penn Virginia Corp. and Linn Energy LLC, which filed for bankruptcy this week owing more than $11 billion combined.

Several more are on the brink. Many have crippling debt loads and will be hard pressed to bounce back.

It's an old canard that new bull markets are fertilized by the bodies of the old. The current bull market in equities was built on the bones of Bear Stearns and Lehman Brothers. When times get hard and the easy money is gone, the winners buy up the losers. Today Range Resources announced it was buying Memorial Resource for $4.4 billion.

According to Kallanish Energy there are $110 billion in oil assets for sale. The problem has been that sellers were asking too much. But that is starting to change and the price of oil is now at $46.08.

These companies are being rewarded by the market for raising cash and lowering their risk.

All of these things point to a bottom in the oil price and oil stocks. When companies merge, people get fired and losing departments get shuttered. 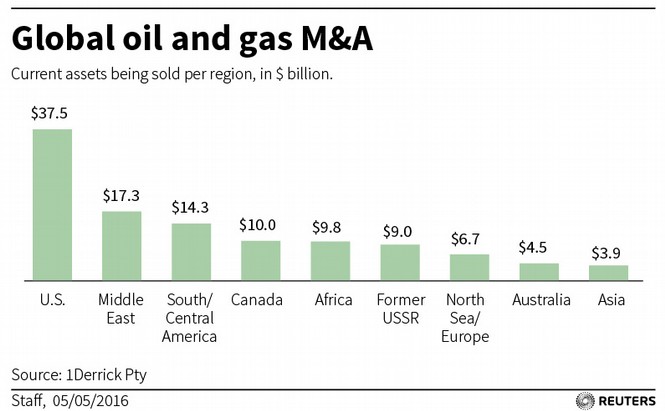 The Rig Count is simply the number of oil rigs that are now pumping oil. This isn't a pure apples-to-apples comparison because, due to fracking, one rig can put out a number of drills and do the work of multiple rigs from the past.

That said, it means something that the U.S. total rig count continues to sit at a historical low.

According to Baker Hughes, the number of oil and gas rigs drilling in the U.S. fell to 415 as of May 6 compared to 894 rigs a year ago. This is the lowest level since Baker Hughes began tracking data in 1949.

Massive Fields Are Now Off the Table

Chinese major Sinopec has closed four oil fields that have been in production for 50 years.

Repsol has closed its Varg oil field in Norway.

PetroVietnam says it is thinking of closing fields.

Most of the Canadian oil sands have been shut down due to wildfires at Fort McMurray. Given the massive rebuilding costs, many won't reopen.

One-fifth of Nigerian oil production was shut down last week, 400,000 bpd due to pipeline disruptions.

Venezuela's oil production is declining rapidly as that country falls into socialist-induced chaos.

The upshot of all of this is that global oil stocks will diminish to 200,000 barrels a day in the last six months of 2016 from 1.3 million in the first half. As the stock market looks forward six months, it will start to price in these oil price gains. Already we are seeing small oil companies double in price. Companies like Patterson-UTI Energy (NASDAQ: PTEN), Diamondback Energy Inc (NASDAQ: FANG), and Oasis Petroleum Inc (NYSE: OAS) are examples of the stealth bull market in oil.

This move is just getting started. Buy small oil companies on the next dip. These companies will go up 500% when oil hits $87 a barrel by Christmas.