Those Jobs Ain't Coming Back: Robots and Big Data

Working in the oil industry is hard. Drilling is laborious, physical work. Those guys move more in a single day than office dwellers do in an entire month.

Moving heavy metal strains your arms, back, and legs. Horror stories are plentiful. It is not uncommon to meet men without fingers and hear stories about folks being blown off the derrick floor or breaking ribs, crushed by travelling block. 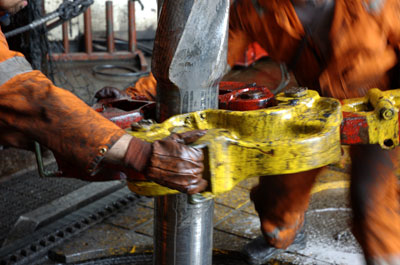 Oil drillers work in all temperatures. In Canada and North Dakota, it can reach 40 below. Work happens in rain, high seas, and blazing heat. Shifts last 12 hours, or if something breaks, it goes on until it is fixed. Lease rates for floating rigs can run $700,000 a day. Downtime equals lost money, which equals job pressure.

Here is a short video of roughnecks making a pipe connection. The first two and a half minutes are pretty cool if you've never seen it before.

In 2014, the U.S. Occupational Safety and Health Administration reported the oil and gas fatality rate is seven times greater than the rate for all U.S. industries. The Centers for Disease Control and Prevention determined that “during 2003–2013, the number of work-related fatalities in the oil and gas extraction industry increased 27.6%, with a total of 1,189 deaths.”

The OSHA IMIS Database reports three out of every five “on-site fatalities in the oil and gas extraction industry are the result of struck-by/caught-in/caught-between hazards.”

The oil and gas industry has more deaths from fires and explosions than any other private industry.

Or you could fall from a height. In the United States, the Bureau of Labor Statistics reported 247,120 non-fatal cases involving falls, slips, and trips in 2014 and nearly 800 fatalities in 2014, up from previous years. And the Canadian Centre for Occupational Health and Safety reports that more than 42,000 workers are injured annually due to fall accidents.

And that's in North America, where safety standards are high. Last Friday, Ghana's only oil refinery exploded, destroying a brand-new oil heating unit and taking 30,000 barrels a day offline. Luckily there were no casualties.

Oil workers are expensive. The average wage is just below $100,000 a year. The cost in insurance, time off, and other factors is also high.

It is no wonder that the industry is turning to robots. There is one private company called Robotic Drilling Systems (RDS) that is developing the world’s first fully autonomous robotic oil drilling rig in Stavanger, Norway.

This super-rig coordinates control of multiple robots to perform complex drilling operations, as you saw in the video above. These robots have over 100 axes of motion that move in real time and are robust enough for oil drilling operations.

One company, Actin, is writing the code to integrate all the robots needed, from drillfloor robots to pipe-handlers, lift, robotic roughneck, and everything else. This automatic rig will be out in beta in 2017. 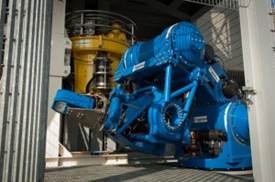 And it’s not just a factor with the labor. When digital technologies and big data are introduced, downtime will fall 36% and operational cost will fall some 20%. Today, only 3% to 5% of gas and oil equipment is connected. This means you don’t have forward predictive powers.

The average offshore rig has 30,000 sensors that generate data. However, less than 1% of this is used — the rest falls into a data hole.

Fatih Birol, executive director of the International Energy Agency, said at a recent conference, “We are seeing that efficiency improvements in the next 25 years are much stronger than the last 25 years, mainly as a result of government policies and also the change in technology led by digitalization.”

The future for oil and gas is sensors, robotics, and big data analysis. The obvious way to profit from these dynamic trends is to find the smaller companies that make the component parts for these systems. The next boom in oil will look different, and not all of the 440,000 jobs lost during the latest oil bust will come back.