The Greatest Concept Vehicle Ever

The CEO of a company called Laser Power Systems says he is working on a car that would never need refueling.

Dr. Charles Stevens has created a concept for a thorium-powered car engine. Thorium, as you know, is radioactive, but it is also one of the most dense and powerful materials on the planet.

It packs 20 million times more energy than a similarly sized sample of coal, making it a superb energy source.

That said, even Dr. Stevens admitted that thorium engines for transportation are many decades away.

Still, his company is taking the first step in trying to build a thorium turbine about the size of an air conditioning unit that could provide cheap power for whole restaurants, hotels, office buildings, and even small towns in areas of the world without electricity. At some point, thorium could power individual homes.

This is possible. For years, Toshiba has been developing self-contained modular nuclear power plants.

I like the idea of thorium-based power plants for a clean and powerful future. Of course, I'm biased...

One $3 thorium company I recommended in December to my Crisis and Opportunity readers is already up 107% and moving up fast.

If you don't know thorium, you should. In the magazine Cosmos, Tim Dean wrote:

“What if we could build a nuclear reactor that offered no possibility of a meltdown, generated its power inexpensively, created no weapons-grade by-products, and burnt up existing high-level waste as well as old nuclear weapon stockpiles? And what if the waste produced by such a reactor was radioactive for a mere few hundred years rather than tens of thousands? It may sound too good to be true, but such a reactor is indeed possible, and a number of teams around the world are now working to make it a reality. What makes this incredible reactor so different is its fuel source: thorium.”

Thorium is the future of nuclear power-based electricity production.

Whether it is in five years or in fifty remains to be seen.

But thorium in cars is never going to happen. They couldn't pass a crash test.

When I read about it, I thought of other absurd concept vehicles. The greatest of them all is the battleship tank: 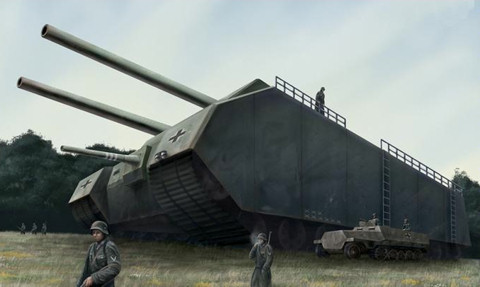 With two navy guns, it could destroy a small town with a single shot.

Of course, it couldn't go down any road or cross a bridge, and it would have been a giant target for allied bombers... But hey, it's freakin' cool.

Sadly, none were every built. Expect the same from thorium-powered cars.

Flashing Red Sell on the Nasdaq
The Nasdaq is showing a double top formation. Christian DeHaemer gives you the options strategy to make a small fortune if it cracks by October.
Would Warren Buffet Buy or Sell This Market?
It is increasingly difficult to find something of value to buy in this market. Here's how to handle what's coming up...
Known Unknowns and Black Swans for Q2
Chris DeHaemer talks about war between Vietnam and China, a German slowdown, and the best-performing market since 2009...
Hydrogen Fuel Cells: The Downfall of Tesla?
Lithium has been the front-runner in the battery technology market for years, but that is all coming to an end. Elon Musk is against them, but Jeff Bezos is investing heavily in them. Hydrogen Fuel Cells will turn the battery market upside down and we've discovered the tiny company that is going to make it happen.