I just returned from a three-week break at my vacation home in Longboat Key, Florida.

I consider Longboat Key my paradise.

About nine miles long, Longboat Key is nestled in between the more celebrated towns of Anna Maria Island and Siesta Key.

But unlike those towns, Longboat is quiet. There are less than 10 restaurants on the entire island, with no franchises or chains. And it’s not unusual to be the only person on the beach.

It’s exactly what I needed after two and a half months of lockdown and an endless parade of pandemic doom and gloom.

But there was also another reason why I went down.

You see, Florida was one of the first states to reopen.

When I arrived on May 21, Florida was already in phase two of reopening its state.

What that meant was restaurants(even for indoor dining), retail shops, pools, and gyms were open.

The only things that were still closed were some state parks and bars... and bars were permitted to reopen last Friday.

To be honest, walking around the shopping district known as St. Armands Circle in Sarasota, it seemed nothing had changed from my last visit in early February. People were out and about, shopping and buying.

The only indication that we were still fighting a pandemic was that some people were wearing masks, and some stores restricted the number of customers.

But because I’m a professional investor and market analyst, I look at things with a different eye than most.

You see, there were two things I noticed everywhere I went in Florida: I kept seeing signs that said “We are hiring” and “We aren’t accepting cash.” 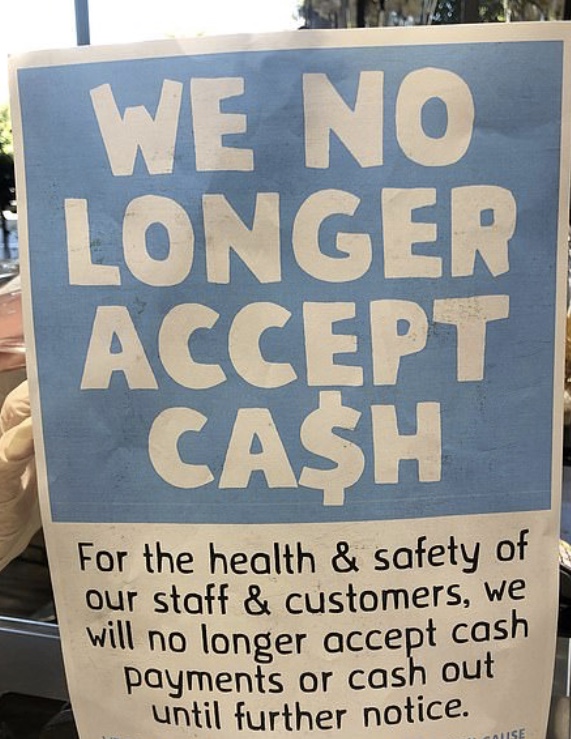 Going cashless was already a trend even before COVID-19. But now that we are in the fourth month of this pandemic, going cashless will be the new standard going forward.

Because cash is filthy according to a May 22 article in the Los Angeles Times titled, “In a pandemic, no one wants to touch it. Why cash has become the new Typhoid Mary.”

The almighty dollar has lost some of its might in the time of COVID-19. While most struggling businesses will take payment in any form to make ends meet during an economic downturn, a minority reject cash, fearing that it could be a transmission vehicle for the SARS-CoV-2 virus. Some experts predict that the pandemic will accelerate a steady flight by American consumers away from dollars and cents. “This crisis is clearly pushing us even farther away from using cash in our everyday legal transactions,” said Kenneth Rogoff, a Harvard University economics professor and author of The Curse of Cash. “And it’s for obvious reasons. No one wants to touch something you or someone else just touched. That’s not going to change any time soon.”

This is a megatrend… a megatrend that’s still flying under the radar of Wall Street.

However, there’s a way for you to profit handsomely from it right now.

My good friend and colleague, Christian DeHaemer, has been all over this new cashless revolution. In fact, he was recommending four stocks pushing this revolution well before the pandemic even hit American shores.

He has a very special report he’s put together that I’d like to send to you immediately.

You can have this report in your hands today.

All you have to do is take a moment to listen to why Christian thinks these four stocks are the new high-fliers for years to come. I urge you to listen to what he has to say.