These Are the Stocks Warren Buffett Likes to Buy

“I will tell you how to become rich.

If you know anything about Warren Buffett, you know this quote really defines his investment strategy.

It’s how the Oracle of Omaha became one of the richest people in the world, and it’s how guys like me have been able to build significant wealth.

I’m not saying I have anywhere near the swagger of Uncle Warren, but because I’ve always followed that advice, I’ve always come out ahead.

Certainly my success in the legal cannabis market is proof of this.

It was about four years ago when I started telling folks to buy Canadian cannabis stocks.

Most investors were terrified of such a thing, though.

I was told that to make such an investment would be irresponsible, foolish, and just plain stupid.

They were fearful, and I was greedy.

They missed out on one of the greatest investment opportunities of the decade, while I recommended three Canadian cannabis stocks that have since delivered gains in excess of 1,000%.

Of course, today, all the folks who were terrified of Canadian cannabis stocks are piling in. But they’re too late now.

The big money has already been made there, and we’re moving on.

We know cannabis will be fully legal in Canada this year.

But only those who took positions in Canadian cannabis companies before this became a reality are walking away with quadruple-digit gains.

At this point, you might be able to make a few more bucks in the Canadian cannabis space, but insiders have since moved on to greener pastures. And those pastures are now in the United States.

At the moment, cannabis is still federally illegal. As well, the Attorney General of the United States is also very opposed to legalization and has made this clear on a number of occasions.

This creates fear for investors.

But to be honest, the last thing you want to be right now is fearful, because it’s time to be greedy.

It’s Time to Make a Move

Although the plant was still federally illegal back then and there were plenty of prohibitionists pushing back against legalization, we knew momentum for legalization was strong.

Polls were indicating a majority support for legalization, and local politicians were starting to cave. There were just too many political, social, and economic benefits to continue fighting against legalization.

Still, most investors were too afraid to pull the trigger. And they missed out on some very real life-changing profits.

The good news is that there’s now another chance to make a ton of money in the cannabis space — if you’re greedy enough! Because everything that unfolded in Canada over the past four years is now unfolding in the United States.

The scenario is almost identical.

Hell, just last week, President Trump announced that he will support congressional efforts to protect states that have legalized cannabis.

Make no mistake: The path to full-scale federal legalization is underway in the United States. And if you have any sense about you, you’ll get yourself some exposure to the U.S. cannabis market pronto!

The Biggest Bang for Your Buck

In any industry, there’s always one company that really sticks out.

In the case of the Canadian cannabis industry, this would be Canopy Growth Corporation (TSX: WEED).

Canopy Growth Corporation is the biggest player in the global cannabis market, although it’s in Canada where the company has built its empire.

We bought this stock back in 2015, when it was still considered a penny stock.

Here’s how that worked out... 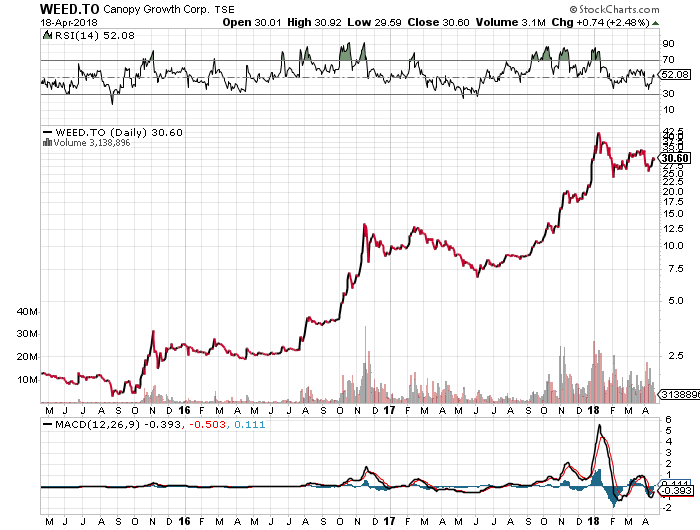 Of course, the big money on Canopy has already been made. And, like I said, we’re focusing on the U.S. market now because, quite frankly, that’s where you’re going to get the biggest bang for your buck.

In less than five years, the federal prohibition on cannabis will be lifted in the U.S., and a handful of U.S. cannabis players will be first in line to reap the rewards.

Hell, they’re already reaping the rewards of legalization in more than half the states in the country.

One company in particular that’s really capitalizing on the growth of the cannabis market in the U.S. is MariMed Advisors (OTCBB: MRMD).

MariMed has its hands in everything from cultivation to dispensaries, and it has the greatest exposure to the U.S. market of any U.S. cannabis player.

The company has developed and manages eight facilities in Rhode Island, Delaware, Illinois, and Nevada, with five new facilities under development in Massachusetts and Maryland.

MariMed’s financials are solid, too, unlike a lot of other U.S. cannabis players in the market.

One thing that makes MariMed particularly valuable is that, unlike a lot of other U.S. cannabis players in the market, it has had no problem raising capital without having to dilute shareholders. This is of immense value and makes MariMed a solid play for investors looking to capitalize on the rapid development of the U.S. cannabis market.

Bottom line: If you’re looking to get some exposure to the U.S. cannabis market, which is already making us a boatload of cash, MariMed is a solid play.

Of course, while MariMed is one of my top U.S. cannabis picks, there are others. Some of those are listed in my 77-page e-book, “A Beginner’s Guide to Investing in Cannabis,” which you can get access to by clicking this link.

One thing to note about MariMed is that every time another state legalizes cannabis or expands current legal markets, MariMed’s stock benefits.

And there are a lot of states getting ready to legalize this year.

We’ve already taken positions in the companies that are most likely to benefit from new legalization efforts this year. You can read more about those companies here.

Whatever you decide to do, however, be very aware of one simple fact: The U.S. is going to legalize cannabis on a national level. This IS going to happen. But you’re only going to get rich from this market if you take a position right now. So I strongly urge you to click here to get started.