The "US Civil War" Narrative Is a Hoax

Over the past few months and weeks, there has been a lot of talk about an upcoming “civil war” in America.

But what exactly do people mean by "civil war"?

Well, it's not so clear.

It's obvious that anyone predicting a "second civil war" in the United States is trying to conflate the social, political, and economic issues of our time to the American Civil War of the mid-19th century. Clearly that's a false equivalence. The American Civil War was a war with very defined borders — the North and the South. And from what I gather, there are no expectations of such clear territories this time around.

Instead, it seems most people talking about and predicting a so-called civil war are really expecting unorganized violent clashes between armed anti-government (the liberals for now) and pro-government (Republicans for now) forces. A more appropriate term for what people are expecting is "culture war."

But "culture war" doesn't carry as much emotional punch as "civil war" — it doesn't sell as well. And that's exactly what's happening: Someone is selling you on the idea there could be a civil war. And I'm going to expose at least one of those groups doing that today.

Google Trends shows us evidence of that with large spikes in internet search traffic for terms like “U.S. civil war 2020” at the end of May and beginning of October. 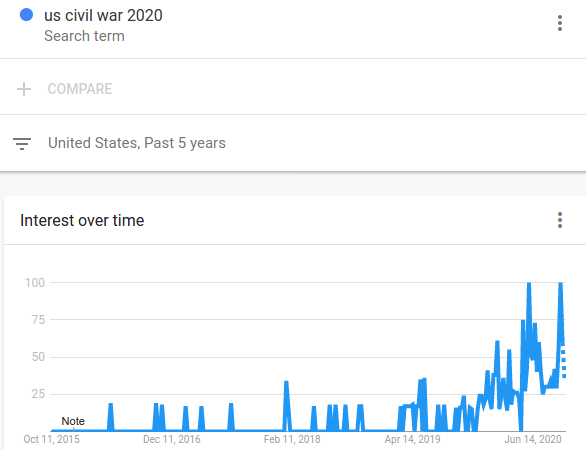 The spike in traffic at the end of May is most likely the result of violent protests following the death of George Floyd. And from what I can gather, the spike in the beginning of this month revolves around a recent poll published in the Washington Examiner.

A majority of Americans are bracing for the possibility of a politically fired civil war, and more than half are already stockpiling food and other essential items to survive and fight back, according to a new survey shared with Secrets.

In the survey, 61% said that the United States is nearing a second civil war, including a shocking 41% who “strongly agree” with that assessment.

And 52% are so convinced that it is just around the corner, or after Election Day, that they are putting away food and other essentials, a historic expansion of the prepper movement that has been brewing for years, now driven by fear and coronavirus-induced shortages.

As I said, it's just someone trying to sell you a story.

And this civil war narrative is exactly that — it's a purposely promoted narrative. Reading past the headlines and a 15-minute internet search make this very clear. And here's your proof...

The recent poll in the Washington Examiner that claims 61% of those polled say the United States is “on [the] verge of civil war” is presented by a group of self-declared “messaging scientists” called Engagious.

Well, it's one of those things you can describe in a positive or negative light.

In an approbatory way, you can say messaging scientists use behavioral science and psychology to clarify marketing messages for companies and government. Or you can just call it what it is: psychological manipulation.

Messaging scientists like those in Engagious want to get in your head. And that's not an exaggeration. This is directly from Engagious' website:

It seems pretty clear to me that the civil war narrative is just another marketing message from one or both sides of the political spectrum.

It's a narrative that was not born naturally but instead has been purposely and carefully sculpted to produce an emotional effect in an attempt to sway public opinion.

There's another word for that: propaganda

Are you going to let that narrative sway your opinion?

Narratives aren't new. Narratives have been given to people when they cannot or will not accept the facts. Today, however, it seems that political groups aren't even trying to present facts first — they're going straight to the narrative.

Facts and numbers are not enough.Narratives have many purposes: to present the status quo, help people see alternative futures, and motivate [mobilization]. Numbers, data, and facts aren’t narratives, though. Alone, data doesn’t help people see themselves in action.Fear and negative narratives need to include a next step.Fear narratives can work when accompanied by messaging that helps people act on their concerns. But just scaring people rarely mobilizes them to act.Our narratives should give people agency and power.When people see themselves as players in a story, they can picture their contributions shaping the future. This opens up space for people to engage in community and political action.

Be careful what you read.

Be careful who you trust.

People will say anything to sell you on an idea.