The Truth Behind Low Oil Prices

Watching for the Buying Opportunity of a Lifetime

Yesterday, as I filled up with sub-$2 gas for the first time in years, I was so amazed and happy that I had to fire off a "tweet" about it. (You can follow me on Twitter as "nelderini") Wow, a fill-up for under $40! That's great-a little more money to work with for the holidays.

My elation was short-lived though, as I thought again about the threat that low oil prices pose to the supply in the longer term.

Anyone can see the obvious risk. With the price of gasoline so low, drivers will be more inclined to take those extra trips, or maybe bring the Hummer out of retirement. The recent surge in mass transit ridership may fade away to be replaced again by gridlock. A resurgence in demand now cannot be met by an increase in supply.

There is a not-so-obvious risk as well: retreating investment. Two key factors are slowing the pace at which the industry is developing the new oil and gas projects that are so critical to our future supply.

The first is simply price. As oil prices crashed from $147 this summer to around $50 today, developers withdrew their commitment to drilling new wells and building new distribution and refining projects. Under a rule-of-thumb production cost for a new, marginal barrel at around $65 today, it simply doesn't make sense to throw millions of dollars at drilling new wells when oil futures are selling for $50.

French oil company Total's CEO recently warned that at $60 oil, "a lot of new projects would be delayed."

The same thing is happening in natural gas. At a rule-of-thumb production cost of around $6.50/MMBtu (million Btu), or roughly $6.32/Mcf (thousand cubic feet), unconventional gas projects like the ones we are depending on for future US gas supply become uneconomical. Yesterday, Nymex Henry Hub futures closed at $6.49.

A second, more insidious factor is quietly eroding hopes for our future oil and gas supply however, and that is the continuing global credit crisis. As banks remain reluctant to lend each other money—even money freely given to them by Stammerin' Hank at the Treasury for that very purpose!—credit has also become hard to come by for anyone trying to start a capital-intensive project. And all energy projects need a great deal of capital.

Consequently, a growing drumbeat of news reports about energy projects of all kinds being delayed, cancelled, slowed, or otherwise curtailed has been issuing from the energy sector. Yet the Street seems not to have recognized that the slowdowns will limit supply in just a few years.

Instead it has continued to bid down prices of oil and gas, and the companies that produce them, with the belief that a slower economy means slower demand and a glut of supply.

The data certainly supports that view. Chinese imports of diesel and gasoline have dropped to the lowest level in 14 months, demand projections are being slashed worldwide, and US oil consumption alone is down nearly 1 mbpd.

But by focusing on near term supply, the Street is really fighting the last war when it should be pricing in a long-term shortage. Investment is already falling short of what is needed to ensure a future supply of those marginal, expensive barrels that everyone is counting on.

(In the same way, I have been concerned that with their current focus on deflation, the Fed will miss the turn heading into the next inflationary phase, when oil and gas and commodity prices will once again shoot for the moon. I don't know when it will happen, but at some point, probably within the next year to year and a half, I expect a major reversal of the current trends. The dollar will sharply weaken in recognition of the Treasury's unprecedented printing of money, which could send oil prices back up to $150 and beyond in short order, taking the rest of the commodity complex with it.)

The hardest-to-produce barrel, of course, is the most expensive one and the most vulnerable barrel in an economic crisis. That honor belongs to the tar sands producers of Alberta, where the production cost from existing projects is roughly $40/bbl, from new projects about $65/bbl, and from future projects an estimated $85-$100 per barrel. Tar sand project costs ran up approximately 50% this year even as oil prices fell, putting a double-squeeze on tar sands producers. Companies are now being forced to cut back on financed development and try to fund their expansions out of cash flow.

Here are some very abbreviated highlights of energy project delays announced in the last month alone:

Setting up the Air Pocket

If we are, as I believe, less than halfway through the current economic downturn (recession, depression, choose your word) then we should take the history of the Great Depression into account. Here's an interesting chart showing that non-residential investment—the category that includes big heavy equipment projects—fell more than all other sectors over a period of four years, and its recovery was slow. 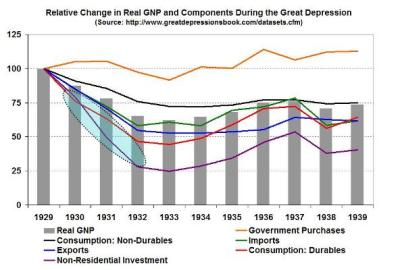 Therefore it will take some years before investment returns to the levels needed to support future supply flows against what we know to be serious decline rates. Lead times for oil and gas projects are long, and industry responses to economic news usually lag by six months or more.

Under-investment is precisely what the IEA warned about in its recent World Energy Outlook report, in which they said the world would need to invest over half a trillion dollars per year for the next 22 years just to maintain current supply levels. (See "IEA Oil Report: 'Time is Running Out'" for my analysis of the report.)

I find it hard to imagine any scenario under which that sort of investment is made in current production while the world is going through a global recession and economic contraction...let alone the $35 trillion the agency believes will be needed to meet energy demand and carbon control targets by 2030.

This recession will ultimately set up an "air pocket" in supply. As the global economy recovers, say 18 months from now in mid-2010, and energy demand returns, we could find ourselves without the ability to increase supply because we didn't make the necessary investment today.

By 2010 we will also have reached global peak oil (the "all liquids" peak). The earth will finally say "She can't take anymore, Captain, I'm givin' ‘er all she's got!"

At a petroleum conference in Abu Dhabi earlier this month, the UAE Energy Minister admitted the reality of peak oil, saying "It is common knowledge that the age of easy oil is gone forever," while others at the conference, like BP Chief Executive Tony Hayward, worried aloud about what would happen when the economy rebounds, saying, "Increased demand will stretch the system to its limits, and this will cause another upward spike in the price."

Until the credit markets are cured, the dollar weakens, and oil prices settle firmly back in the $70-$100 range, it's hard to imagine the requisite trillions of dollars flowing back into new oil and gas projects.

So enjoy that sub-$40 tank of gas while it lasts. Within the next year to a year-and-a-half, I think we'll see another astonishing run in commodity prices as money seeks shelter from crashing currencies, and the world begins to price in the permanent peak of supply.

When that happens, we'll be perfectly positioned to pick up the best oil and gas stocks at unbelievable bargain prices.

P.S. Preparing for that "air pocket" in supply should continue to echo in your mind as we move closer to a global peak in oil production. However, finding the right energy plays can be extremely difficult for the average investor. Soon, the window of opportunity will be closed for investors. Make sure you're not left in the dark.