The Top 5 Renewable Energy Stocks for 2019

5 Renewable Energy Stocks to Own for 2019

It was about a decade ago when I walked into the lion’s den.

At a conference dubbed the Modern Energy Finance Forum, I was asked to speak about the future of renewable energy.

This was right around the time the global economy was imploding and new renewable energy technologies quickly went from being the “greatest investment opportunity of the 21st century” to a giant bubble that burst in the face of those who championed the transition of the global energy economy.

This particular event was held in Wyoming, where execs from coal companies outnumbered everyone else in the room.

They greeted me with suspicion and contempt and mocked me when I told them that coal would soon be a relic of the past.

While coal-fired power was “cheap,” it was clear that this particular energy source could not maintain its economic advantage — not in the face of cheap natural gas, incoming environmental regulations, and a renewable energy industry that was experiencing a rapid decline in production costs while enjoying a rapid development of superior technology.

I made my case, and my findings were sound.

We were at the dawn of a major transition of the global energy economy, and the biggest loser in this transition would be coal.

Take a look at this chart: 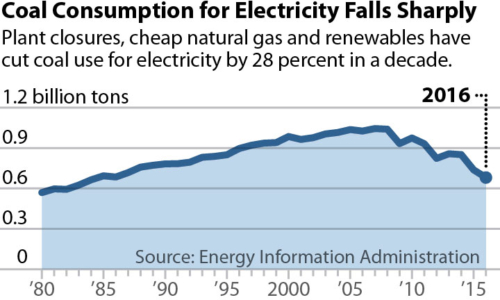 This chart represents the decline in coal consumption from around the time I made my comments through 2016.

Now, it should be understood that coal did see a ray of sunlight in 2017 with the establishment of a new “pro-coal” administration, which had promised a resurgence in coal. But reality quickly dealt a blow to that lofty goal.

Much of this promise was based on rolling back regulatory obstacles that placed an economic burden on the coal industry, but the demise of coal has little do with regulation.

The truth is, a flood of cheap natural gas and rapid integration of cheaper renewable energy technologies represent the coal industry’s biggest headache.

Of course, I’m not here today to bury King Coal.

That casket is already being lowered into the cold, frozen ground.

Instead, I’m here to talk about the future of energy, which, of course, has little to do with anthracite.

Although natural gas has done more damage to the coal industry than any environmentalist could ever do, the reality is that renewable energy continues to add market share at a much faster rate than anything else.

It is true that natural gas is king and will likely hold that crown for many years to come. But if you’re looking for growth, renewable energy is where it’s at. And this is based mostly on production cost reductions.

As reported in Forbes, 42% of global coal capacity is currently unprofitable, and the United States could save $78 billion by closing coal-fired power plants. And this all boils down to the economics, as the cost of renewable energy dips below fossil fuel generation.

Across the U.S., renewable energy is beating coal on cost: The price to build new wind and solar has fallen below the cost of running existing coal-fired power plants in Red and Blue states. For example, Colorado’s Xcel will retire 660 megawatts (MW) of coal capacity ahead of schedule in favor of renewable sources and battery storage, and reduce costs in the process. Midwestern utility MidAmerican will be the first utility to reach 100% renewable energy by 2020 without increasing customer rates, and Indiana’s NIPSCO will replace 1.8 gigawatts (GW) of coal with wind and solar.

Lazard’s annual Levelized Cost of Energy (LCOE) analysis reports solar photovoltaic (PV) and wind costs have dropped an extraordinary 88% and 69% since 2009, respectively. Meanwhile, coal and nuclear costs have increased by 9% and 23%, respectively. Even without accounting for current subsidies, renewable energy costs can be considerably lower than the marginal cost of conventional energy technologies.

No Need for a Crystal Ball

But in the case of energy, you don’t need one.

All the data is at your fingertips.

Nuclear is stuck in idle and, at least in the U.S., has no chance of growing beyond where it is today.

But renewable energy still has a huge runway of technological improvement and cost reductions ahead of it.

Any idiot can figure this one out.

Renewable energy is the future of the global energy economy, and investors would be wise to ensure that some of their portfolio is dedicated to renewable energy.

The renewable energy industry has had a few boom and bust cycles since 2005. But we are starting to see some stabilization as older tax credits and subsidies begin to be phased out, while the major utilities have clearly indicated that renewable energy is now a crucial part of their production portfolios.

Now, there are any number of renewable energy companies in which you can invest, although at this stage of the game, don’t expect to see any triple- and quadruple-digit gains in the near term. Those types of gains remain exclusive to the cannabis industry.

That being said, given the rapid decline in coal consumption, 2019 will see plenty of new renewable energy projects getting funded and integrated into the grid. Most of this will come in the form of solar, wind, and energy storage.

So here’s a list of five renewable energy stocks you should pay close attention to in 2019.

Certainly there will be more throughout the year, and of course, when it comes to energy investing, you must remain nimble. Policy changes certainly affect the market, as well as commodity price disruptions and geopolitical events that simply cannot be trivialized.

However, there is one reality that cannot be changed: The transition of the global energy economy from one that is based primarily on fossil fuels to one that will soon be heavily weighted in renewables is a lock. So invest accordingly.